Following our glimpse of Böcklin’s inspiration off the coast of Corfu, a short jaunt inland brings us to former haunts of two of our favourite headstrong dames.

Empress Elisabeth of Austria (a.k.a. Sissi) never pursued a building programme quite as extensive and profligate as that of her cousin and kindred spirit Ludwig II. However, soon after the Bavarian king’s death in 1886, she set about constructing a big-budget get-away of her own. This was the palace of Achilleion, an expression of her love for Greece and one of its classical heroes in particular. “He was strong and bold,” said Sissi of Achilles, “he despised all kings and all traditions; he worshipped nothing but his own will, and he loved nothing but his dreams.” Like Sissi, Achilles would not be readily brought to heel. The palace that takes his name sits amid a spectacular, landscaped plot strewn with sculptures (including a nude study of Napoleon’s sister, Pauline Borghese), offering views northward to Corfu Town and beyond to the mountains of Albania.

Greece and Sissi’s native Bavaria enjoyed intimate relations throughout the 19th century. Her uncle Ludwig I was an ardent philhellene, and the neo-classical facades of today’s Munich originated in his reign. The first Oktoberfest, in contrast to the Lagerpalooza it has become, was actually an attempt at recreating the Olympic Games – then in their millennium-and-a-half abeyance – to mark Ludwig’s wedding. Conversely one of the best-selling lagers in Greece to this day bears the surname of Bavarian brewer Johann Karl Fix, who introduced beer to the country after Ludwig’s son Otto ruled united Greece as its first modern king between 1832 and 1862.

Sissi first visited Corfu as a young woman, when the island was still a British protectorate, and fell in love with it. By the time she returned in the late 1880s to launch the grand project of the Achilleion, she had all but retired from public life, devastated by the suicide of her son, Crown Prince Rudolf.

Considering it was merely a holiday home with no official function, the Achilleion is quite the pile. The erstwhile chatelaine stands on a pedestal to the left of the entrance, looking down on our uncrowned heads as we pollute her serene retreat with our plebeian presence. No matter how you position yourself, even jumping up on the window sill (yes, I tried), you can never get eye-to-eye with her marble effigy. In terms of decor, the bright, cool reception rooms explore different modes of “classical” design, alternating between restraint and excess (from the ornamental incontinence of the staircase the Partner surmised that the empress had been presented with a book of possible decorative motifs and simply responded “yes”).

Once construction was completed in 1892, Elisabeth arrived on the imperial yacht named for another Habsburg home, Miramare. In his 1899 biography, A. de Burgh describes the obsessive solitude of Sissi’s time in Achilleion, where she failed to shake off the melancholy that distinguished her later life:

…her apartments there were completely isolated from any other part of the building; she had her private entrance, and could leave or enter the palace entirely unobserved at any moment during the day or night. Her meals she took by herself, waited upon only by a lady-in-waiting and one footman. She would spend a few hours during the day in the society of some of her suite, or with her teachers and readers; but the nights were her own – then she would wander alone through the dark groves and along the gloomy walks. When everyone had retired and night covered the landscape, in the subdued glimmer of the moon or the stars, the Empress was often seen entering the gardens, clad in dark, closely fitting garments, a black veil thrown over her head, as she glided along the terraces and the paths of the park, and found her way to the beautiful monument she had erected to her son Rudolf in one of the most enchanting spots of her domain.

She soon tired of her hideaway, her enthusiasm so consumed by the journey that none remained for the destination. “Making a palace of dreams is not the same as living in a palace which is made,” as later biographer Andrew Sinclair notes. Sissi left a poem in which she appeared to regret spoiling the peace of the little villa that stood on the site before she had it removed for her “fairy palace” as she puts it. The verse has an old cat returning to the site only to leave again, dispirited by the change. Sissi herself only visited the Achilleion for around two weeks a year until her death in 1898.

Almost a decade later it was purchased by Wilhelm II – the interior still boasts his desk chair, fashioned as a saddle. The anti-Semitic kaiser removed the memorial to Jewish poet Heinrich Heine that Sissi had erected in the grounds. He kept Sissi’s statue of the dying Achilles, but his own response could not have better illustrated the contrast between the reclusive, morbid empress and the belligerent, vain German overlord; Wilhelm had an enormous figure of Achilles in full martial mode erected, which crudely dominates a garden terrace. After periods as a military hospital in the two world wars and later service as a casino, the palace was restored and now functions as a museum. 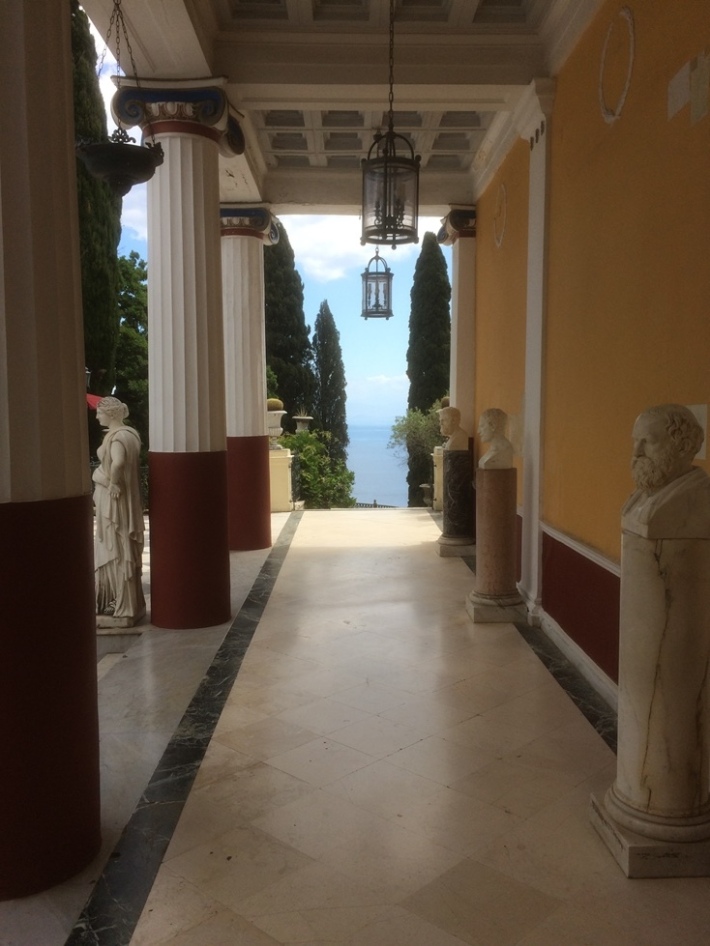 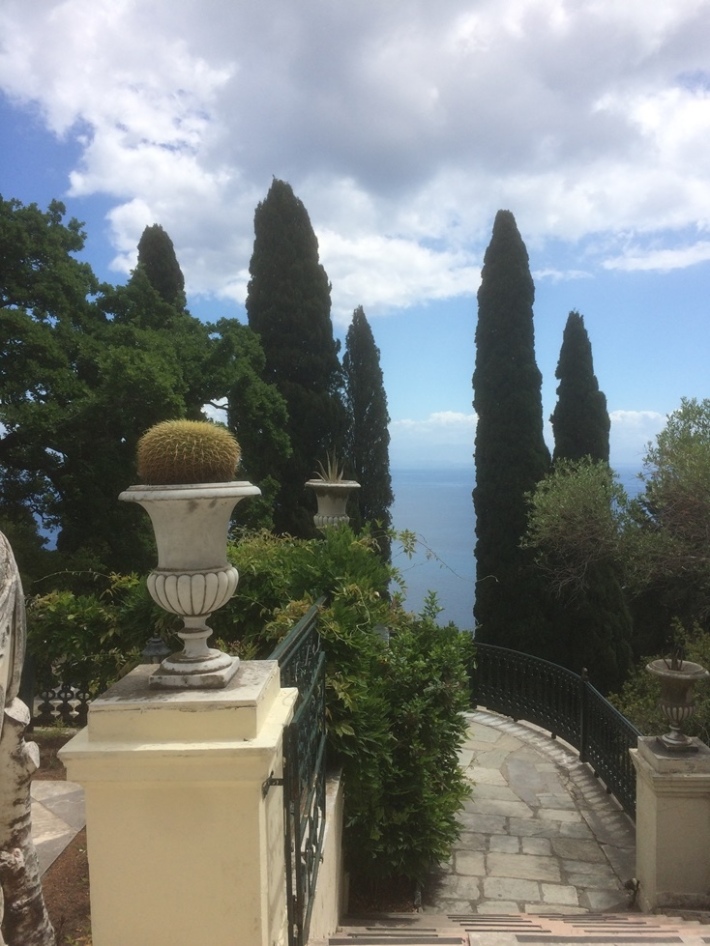 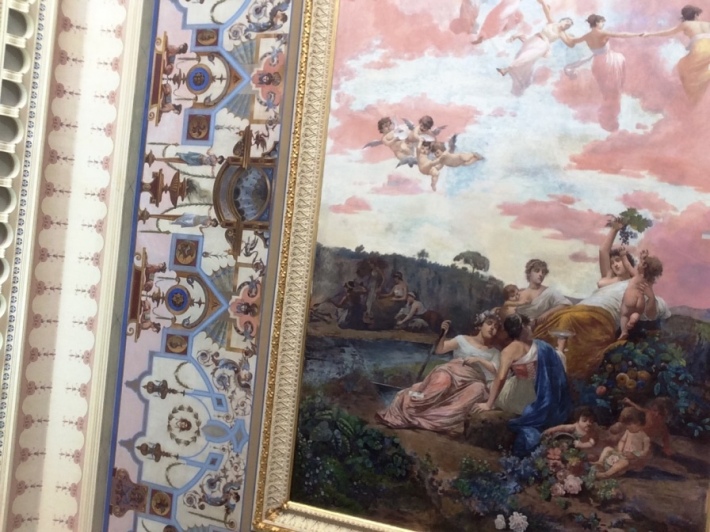 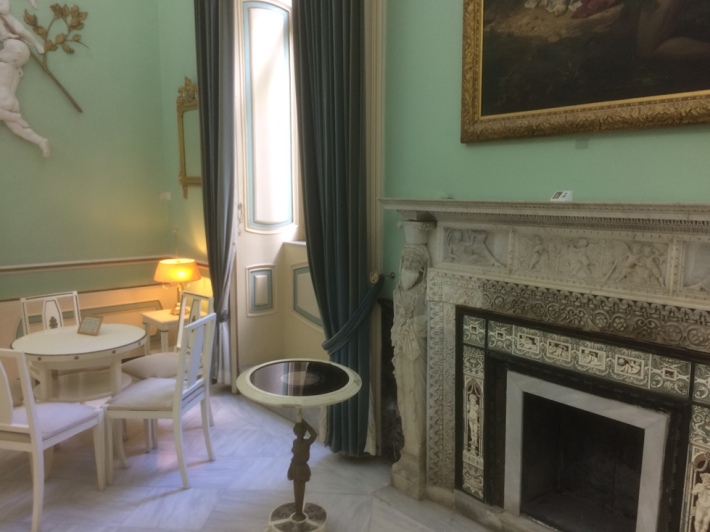 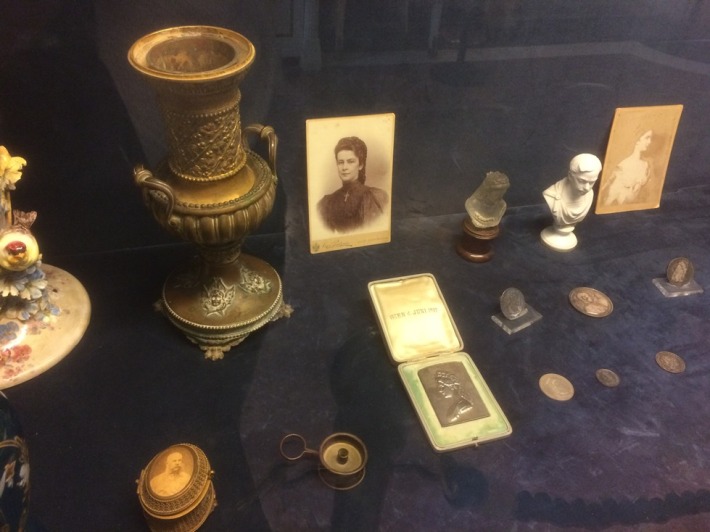 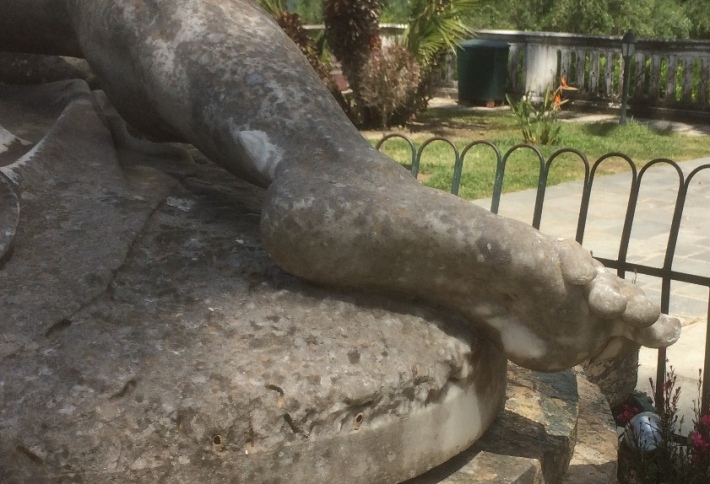 The writer offers his respects

Before we descend the winding roads to the coast, we retrace the sandaled footsteps of another strange yet familiar flower.

If Sissi carried the classicist sehnsucht of Munich back to its origin, writer Franziska zu Reventlow brought an entirely different mode with her from the Bavarian capital. Aristocrat by birth, “Fanny” zu Reventlow was governed by the free-spirited customs she had observed in the Munich district of Schwabing, where she became notorious as the “bohemian countess”. Like Sissi, she was drawn to this hillside for the liberty and solitude it promised. “I well understand why the gods sought out Greece and I’m beside myself with happiness to be here,” swooned Reventlow after landing on Corfu.

In late 1906, shortly before Kaiser Wilhelm turned up to measure the drapes in his newly purchased palace, Reventlow and her illegitimate son Rolf arrived in the little town of Gastouri, walking distance from the Achilleion. While it didn’t share its neighbour’s sea vista, the village enjoys sublime views across the green, cypress-studded hills of the hinterland as compensation. A turgid winter and recurring illness tested the resolve of mother and son, and their accommodation left much to be desired. Above them in their shabby guesthouse dwelt a Frenchman by the unlikely name of Monsieur Mouton, who had lent a sum of money to the landlord and, with repayment non-forthcoming, stubbornly remained to get his money’s worth. And while Reventlow sometimes complained of the isolation, company could be worse. On one occasion a “pack” of Germans swept her up and enjoined her to a copiously liquid breakfast on board a ship anchored in Corfu Town. These figures evidently made an impression, turning up in barely transfigured form ten years later in the last collection of fiction she published in her lifetime, The Guesthouse at the Sign of the Teetering Globe (1917).

Although I don’t know exactly where she lived for the few months of her Gastouri episode in 1906/07 (or even if the building still stands), the village offers a few crumbling candidates. With no evidence beyond intuition I found a building near a little church that I felt best embodied her presence. Two cats eyed me suspiciously from its external staircase, while a group of calla lilies cowered in the shade before its decaying shutters. One solitary lily kept its distance from the rest, glowing with an uncanny light when photographed. A lost portrait of arch individualist Reventlow showed her holding lilies, and I concluded that this lone bloom would stand for the bohemian countess. 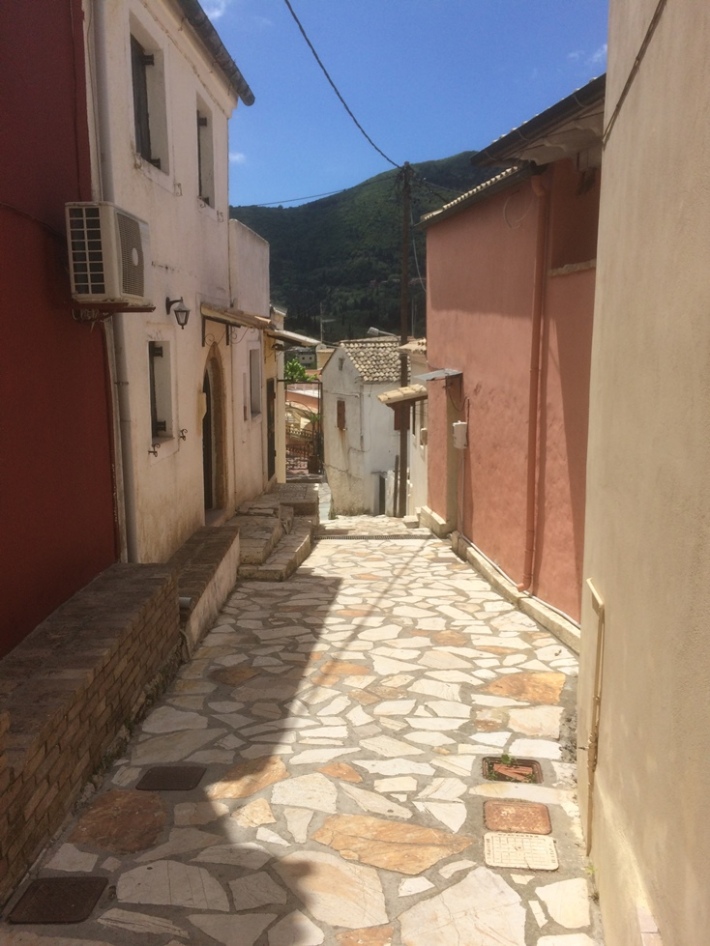 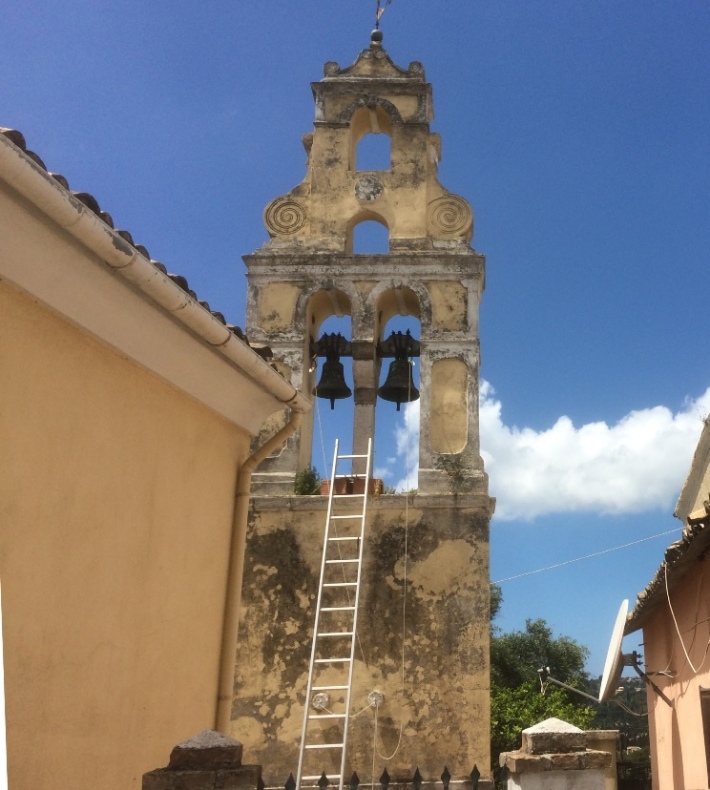 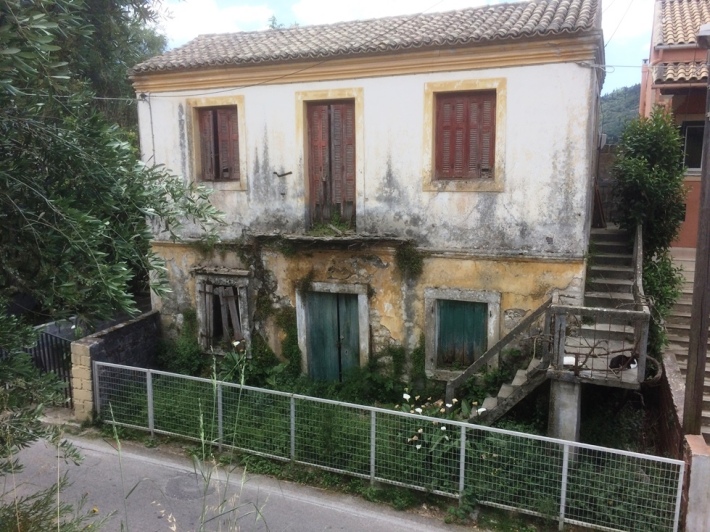 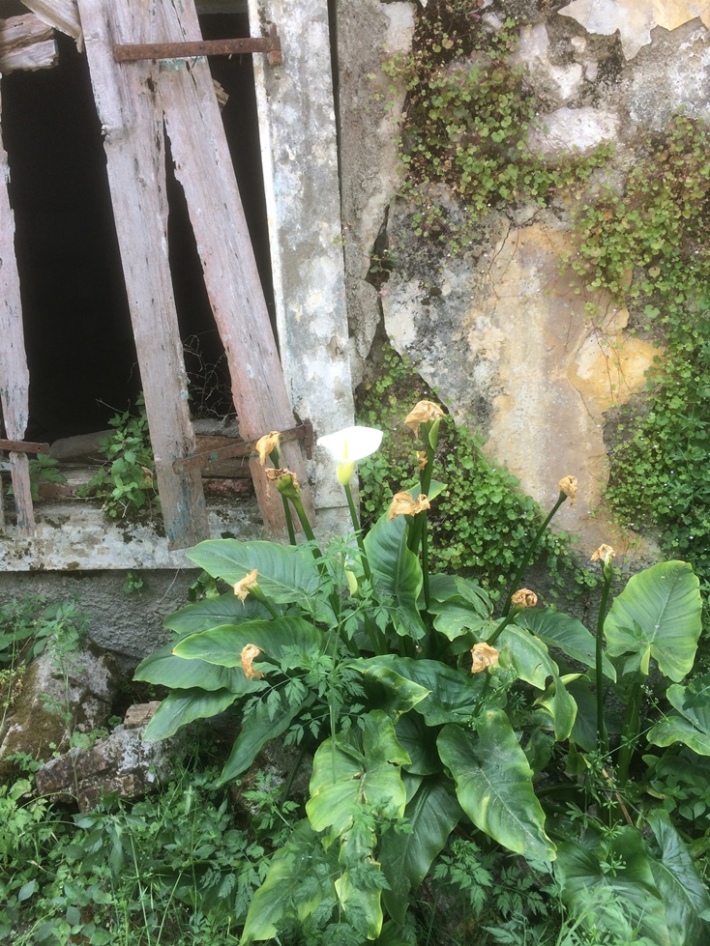