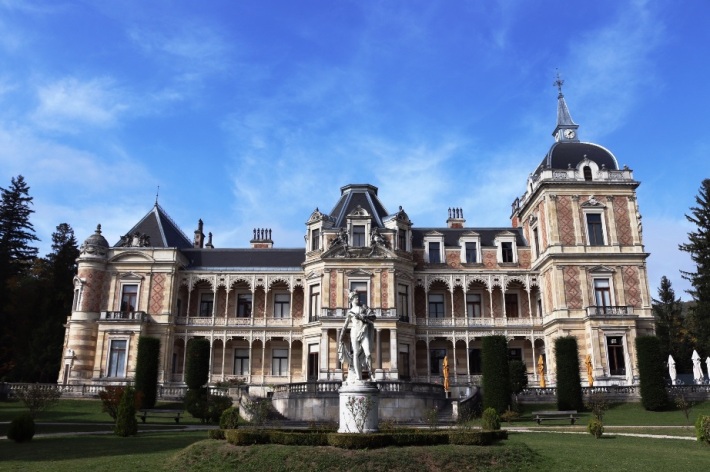 We’re in Vienna! Well, just outside. We’ll be back soon for a more expansive look at the Austrian capital and its rich heritage of neurosis and peculiarity, but for now Partner and self find ourselves at the western edge of the city where the streets slope abruptly upward then just as suddenly halt at the onset of the Vienna Woods. We are tracing the tale of Sissi.

What has always fascinated me about Sissi – more correctly Sisi, more formally Empress Elisabeth of Austria – is the jarring disconnect between her extremely idiosyncratic character (reclusive, morbid compulsive who had a horse called ‘Nihilst’, starved herself and lived much of her adult life longing for death) and her banal postumous image (pretty lady in a big frock). It is the latter variant that appears in effigy all over Vienna, and it is in pursuit of this sanitised phantom that the crowds queue to see her apartments in the city-centre Hofburg. I could have picked this or any number of other Viennese locations associated with the empress, but in the Hermesvilla we have an early insight into the private, tragic, flat-out weird Sissi that is infinitely more compelling. 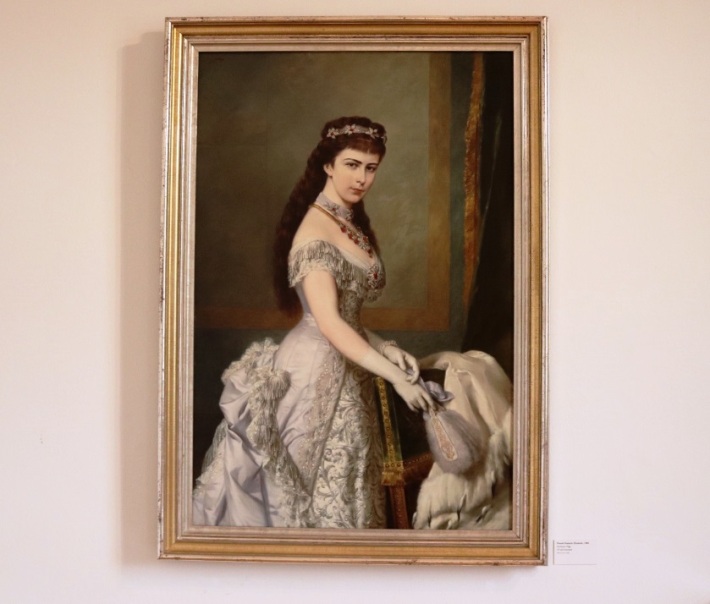 The tragedy, it is important to point out, was real. It is difficult to imagine a more appalling fate than losing a child to suicide, but as well as this Sissi endured the death of another child in infancy and the early loss of two sisters, and the mysterious demise of her beloved cousin Ludwig. Wrenched from her idyllic Bavarian childhood and brought to Vienna on marrying Emperor Franz Joseph at just 16, her children taken away from her as soon as they were born, she grew to hate the court and put as much distance between it and herself as possible. The Hermesvilla, lying in sylvan solitude amid a former Habsburg hunting ground just outside Vienna, was a gift from Franz Joseph to Sissi, but also an attempt to lure her home. The imperial pair first stayed in the villa in 1887, thereafter Sissi generally spent the late spring of each year here.

Once you arrive at the extensive grounds of the Lainzer Tiergarten, as it is now known, you still have a way to go (so far from public transport! It’s like they weren’t even thinking about the resale value). We detour via a promised hill-top view over Vienna but today it is veiled in autumn mists. They have drifted away by the time we approach the villa, and there is something magical about the way it slowly becomes visible throught the trees.

Like Sissi’s later Corfiot bolthole Achilleion, it’s a substantial residence that still adheres to a recognisably human scale. But it’s an oddly disparate structure; the side facing the U-shaped courtyard presents a stern Mitteleuropa countenance, while the garden facade is adorned with filigree wrought-iron lace; in parts it could almost be an overblown colonial-era Australian house, until the dominant gene reasserts itself, in the form of an out-sized protuberance jutting from one side like the jaw of one of Franz Joseph’s Habsburg forebears.

Inside the interiors reflect a range of late 19th-century design ideals. Some spaces, such as the elegant main staircase, are relatively restrained, although it is never entirely clear how much they reflect original circumstances. A range of historicist approaches distinguish other parts of the house, most cohesively in Sissi’s private gym with its Pompeiian-style murals, most regrettably in some maladroit ceiling paintings. 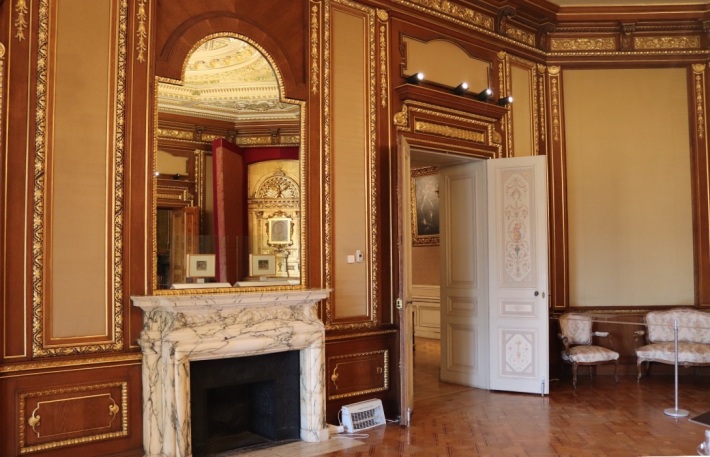 I mean, it’s not exactly Tiepolo, is it?

Sissi’s bed chamber, meanwhile, is an overwrought, nightmare-ish melange of competing motifs and materials, Mannerist in its unsettling disproportion. Murals speak of the empress’s identification with Shakespeare’s Titania while the bed, with its funereal baldachin, isn’t even the creepiest thing in the room. That would be the shrouded figure in the corner, which Sissi commissioned to mark the death of her son. Imagine brushing up against that as you get up to pee in the middle of the night; ill met by moonlight indeed. 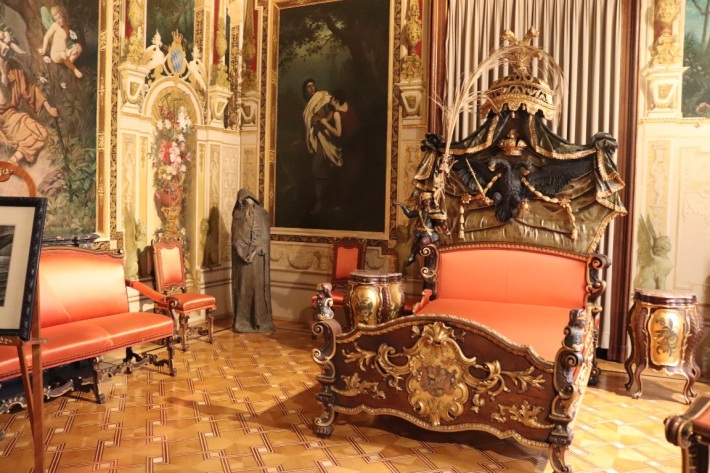 More morbid mementoes await; Sissi’s cousin Ludwig appears in a formal portrait, but also in a pastel of the dead king laid out in state. Even by the standards of an era that offered us mourning jewellery and photographic portraits of mothers who had died in childbirth, the scent of mortal doom hangs heavy in what is supposed to be a leafy getaway. 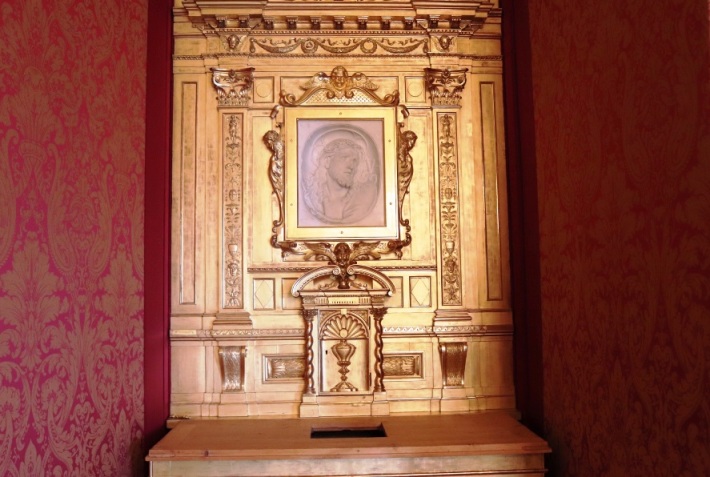 But the garden outside is still full of life so we exit via the gift shop, leaving with a rubber ducky Sissi and a copy of Michaela Lindinger’s book Sonderlinge, Außenseiter, Femmes Fatales: Das “Andere” Wien 1900 (“Eccentrics, Outsiders, Femmes Fatales: The “Other” Vienna around 1900″), a book that is so intensely me I can’t believe I haven’t come across it before. It also offers some valuable pointers to our Viennese digressions to come. For now, we set off in search of Sturm, the fresh, sweet, barely fermented harvest wine they serve in autumn here. After a visit to the faux toile gents’ we pass by Ulrike Truger’s contemporary statue showing Sissi the peek-a-boo solipsist with a fan in front of her face and head for a Heurigen. 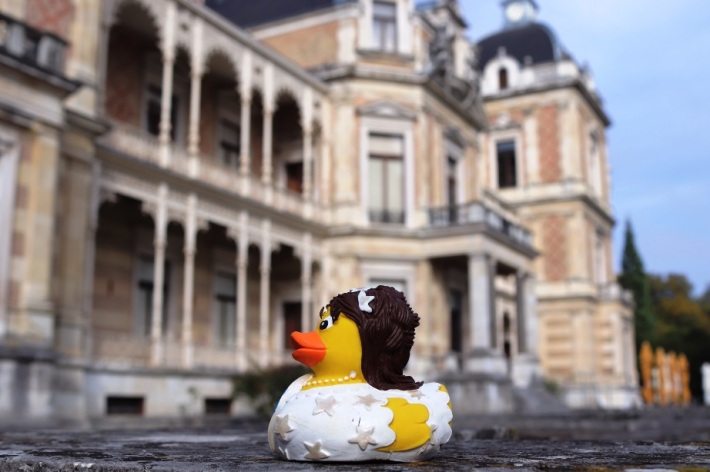