Anyone conversant with Gawker and the noxious cloaca running down the right-hand side of the Daily Mail’s website would find the popular press of Belle Époque Paris strikingly familiar. Writers like Jean Lorrain (of whom more on the weekend) helped turn the fourth estate into a fifth column to batter down the gilded portals that had once shielded the beau monde from scrutiny.

Few figures excited more gossip in late 19th century Paris, printed and otherwise, than Mathilde de Morny, Marquise de Belbeuf, in whose veins ran a heady cocktail of royal and imperial blood. In an age when women thought themselves daring for adding a man’s tie to their corsetted ensembles, “Monsieur le Marquis” (as she was known to her servants) or “Missy” (to everyone else) went all the way. From her top hat to her sturdy boots, contemporary images show a Morny indistinguishable from a worldly bonhomme of the period. So complete was her transformation that it is in the sole image here depicting a skirted Missy that she appears to be cross-dressing. An inveterate seducer of women of all classes, she adopted not just the methods but the appearance of a ladykilling rake.

But Missy didn’t arrive fully realised in society, booted and suited. Rather, her look emerged over many years. As a child she grew up amid the Spanish royal court, and there she encountered La Fragosa, one of the few toreras of the era, what’s more one who eschewed skirts for the traje de luces. Missy was smitten, and La Fragosa told her “whatever a man can do, a woman can do too”. It was a lesson she heeded well.

Missy made her entrée into Parisian society in the early 1880s in conventional ball gowns. But it was as a man that she stole a prominent playboy’s mistress and as a man that she dueled him. She won, and to crown his humiliation ripped open her shirt and exposed her breasts; he had been bested by a mere woman. 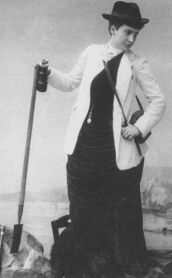 Missy married the Marquis de Belbeuf in 1881 and she became a much-imitated figure in Paris. She had gym equipment installed in her home where she exercised nude in front of a select female audience. But her rise in society coincided with the growing audacity of the press, and when pilloried by Jean Lorrain, Missy’s first instinct was to put him, too, to the sword. Her friend Sarah Bernhardt tried to appease her by coining the phrase engraved on the hearts of fame-whores to the present day: “it doesn’t matter what people say, as long as they’re talking about you.”

Missy continued to dress en amazone in public, that is to say, fashionably but not illegally masculine. But her wealth and social status meant she had access to safe spaces in which to reveal her true self not available to, say, a chambermaid. Missy had her tailor create a transgendered garment with a removable skirt she could check in at the cloak room when in sympathetic company, revealing trousers underneath. Her friend Joséphin Péladan, who addressed her as “cher androgyne“, proclaimed “you have become your own brother”.

It was only after the death of her mother in 1896 that Missy completely abandoned womanly dress. She cropped her hair, ordered suits from Savile Row (and had her shirts laundered in London as well) and – the record is undecided here – either strapped her breasts down or had them surgically removed. 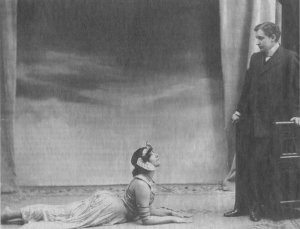 Around 1906 she fell in love with Colette, then married (and indentured) to the writer Willy. Although by instinct and experience wary of the press, Missy was dragged back into the spotlight during a short-lived flirtation with the music hall at Colette’s side. The two women formed one of the most formidable butch/femme double acts of all time, on- and offstage, but provoked a tempest of outrage which sent Morny back to the shadows. She tried to buy a house for Colette, but the owner refused to sell to a woman in trousers; a year later he had overcome his scruples and Colette claimed ownership the day her divorce from Willy became final. The two women would remain together until 1911.

At the start of the 1920s Missy moved into a Seine-side apartment, completely withdrawn from society, the old order into which she was born swept away by the currents of history along with the Belle Époque beau monde. Later in the decade she dressed in “Oxford bags”; few of the other fashionable women wearing the voluminous trousers would have located the origin of this daring masculine style in the lonely woman looking out over the river. Just as few readers would know her as the inspiration for characters created by Colette, Rachilde, Catulle Mendès and – inevitably – Jean Lorrain. Missy remained alone and forgotten until this day in 1944, when the noble head whose features bore traces of Romanov, Bourbon and Bonaparte came to rest in her kitchen’s gas oven and the marquise – brave, sad, handsome, heroic, spirited – breathed her last.