A dandy in aspic 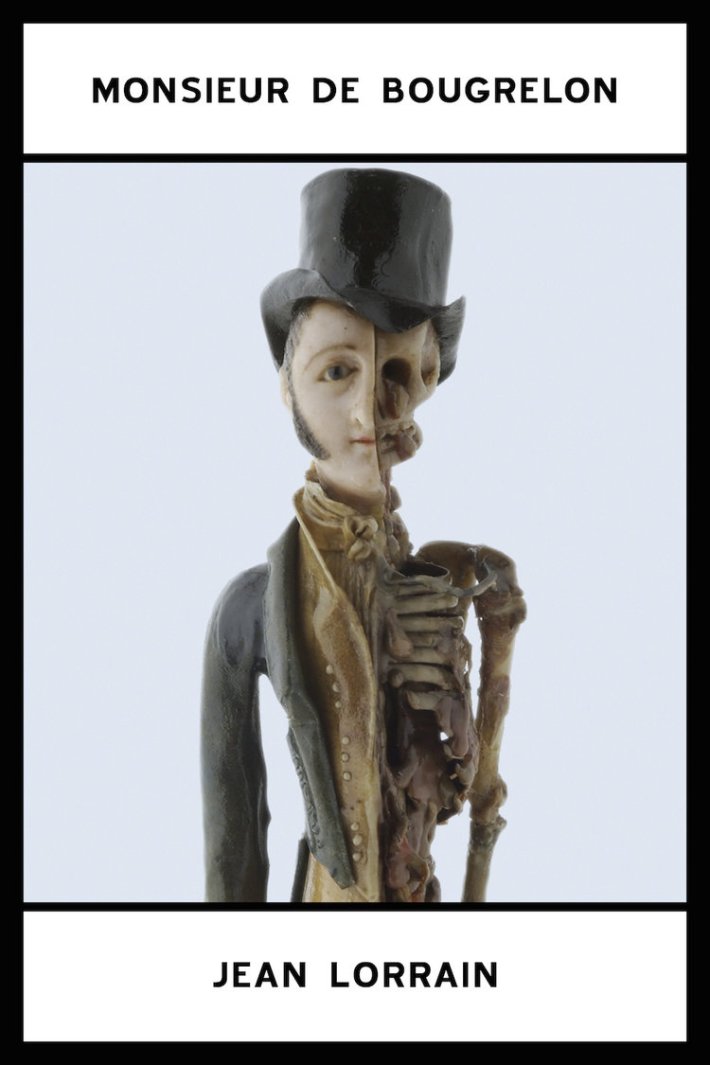 Jean Lorrain, novelist, poet and pitiless critic of Belle Époque Paris, visited Amsterdam in the company of writer Octave Uzanne in October 1896. The pair wandered the waterways, visited the museums, frequented the taverns. Back in Paris, autumn turned to winter and the city of canals froze over in Lorrain’s imaginings as phantoms crowded its misty quays. Before long, Monsieur de Bougrelon strode forth from their midst.

Readers of the Parisian newspaper Le Journal had their first serialised encounter with him in January 1897 in a piece that appeared under the words ‘Contes aux trois Ubus’ – a mysterious label, but its reference to Ubu Roi was clear enough. Just weeks earlier, while Monsieur de Bougrelon was taking form in his mind, Lorrain had witnessed the dress rehearsal of Alfred Jarry’s incendiary grotesque – itself a dress rehearsal for the radical art of the coming century. When the second instalment of Lorrain’s tale appeared it was suffixed by the formal announcement that the old reprobate had been challenged to a duel by promising young author Marcel Proust, who had been slighted by the kind of ad hominem attack that made up much of Lorrain’s journalism.

The writing was on the wall, scrawled by the advance guard of Modernism. Lorrain’s time was passing. Decadence – a movement that celebrated perversity, artifice and the allure of decline, concepts Lorrain had avidly embraced – was itself declining, its fall hastened not by a new age of moral certitude and robust sobriety but the simple cycles of literary fashion. But as his siècle hastened to its fin, Lorrain wasn’t going to cede the floor before offering a minor (and perhaps not even that minor) masterpiece: Monsieur de Bougrelon.

Originally published in July 1897, Lorrain’s novella is finally available in an English translation, by Eva Richter, one that brilliantly preserves the arch, musky funk of the original. It comes to us from Spurl Editions, one of the most interesting small presses to emerge of late. Their art photography titles, including Nude Reagan (just in case you’ve not had your fill of nightmarish presidential visions this year), are complemented by fascinating literary curios. These prose works come with the thick black frame of a cigarette health warning or Sicilian funeral notice.

Our surrogates in Monsieur de Bougrelon are the narrator and his travelling companion, a pair of unnamed Frenchmen. Jaded beyond enduring, they are in an Amsterdam brothel, Café Manchester, when they first meet the star of the show. Monsieur de Bougrelon is an “exile” from France, in his own estimation an “old dandy forgotten in a century of money and gross appetites, an old puppet who has taken refuge amongst phantoms”. His antiquated speech, painted face and ostentatiously unfashionable wardrobe invite mockery, but he both embraces and transcends his own preposterousness. 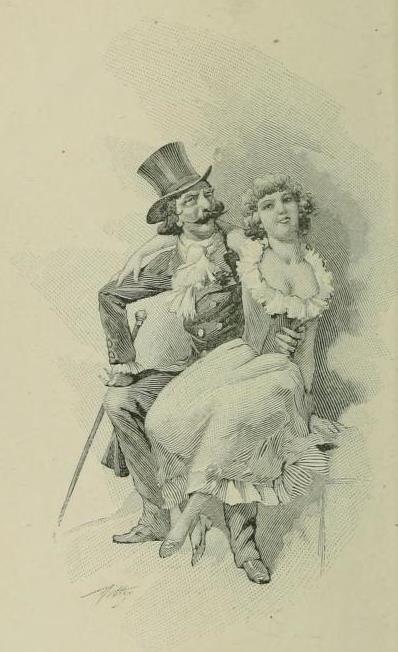 After his theatrical entrance, Monsieur de Bougrelon offers to chaperone the pair around Amsterdam, and the subsequent “action” of the book consists solely of the trio’s wanderings through the damp winter chill of the city. The “old puppet” aphorises airily all the while: “Only millionaires have the right to soot-colored clothes”; “A portrait is always a betrayal”; “The past is a mass grave”, “Protestantism was the death of joy”; “I am an idea in an era that has no more of them” (that last bon mot is coming to a tote bag near you).

For much of the book we are negotiating the shifting terrain of Monsieur de Bougrelon’s past. The nature and duration of his exile changes in the course of his anecdotes, he recounts a hunting expedition that somehow traverses half of Europe in a day, at one point he weaves the plots of two different books by Georges Rodenbach into his own “memories” of Bruges. His “recollections” are delivered as twisted fables – lyrical, absurd, erupting periodically into appalling violence. What to believe? Is Monsieur de Bougrelon really that quintessential Decadent figure, the last of an aristocratic line? And what does he want from our anonymous pair? They begin to suspect their guide might himself be a phantom, a drunken illusion begat of fog and ennui. But chimera or not, their new friend has an alchemist’s gift for transforming the base materials of life into glittering wonders. Bougrelon supplies a “sorrowful opium of what could have been and what is no more” that the pair come to crave. When he withdraws to the shadows to attend to his mysterious affairs, his companions – like the reader – long for his return.

The “vieux beau” has much in common with the Vicomte de Brassard, the old Norman noble and superannuated dandy from “The Crimson Curtain”, and even more with that short story’s author, Jules Amédée Barbey d’Aurevilly. Lorrain was a disciple of the man he called “an exile from an abolished society”, the powdered, affected relic of the past who died in 1889. Monsieur de Bougrelon is the tribute of a devotee, and anyone familiar with Lorrain from his sulphurous reputation alone may be surprised by the tenderness of the gesture. 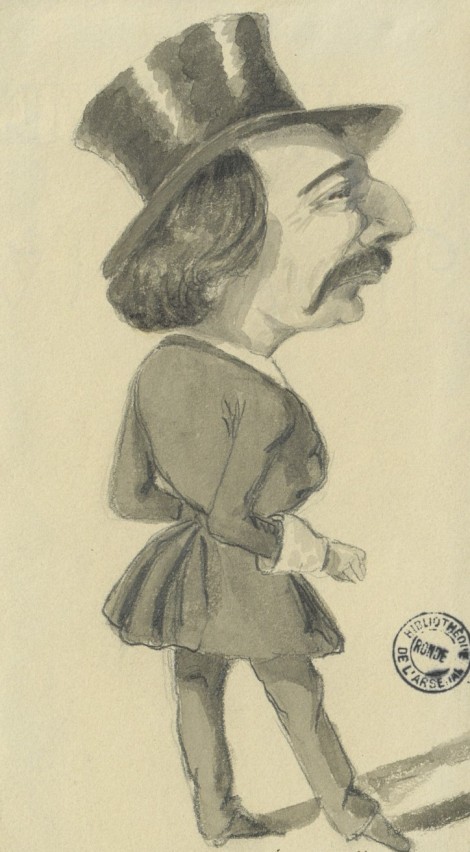 Many of Bougrelon’s memories feature a certain Monsieur de Mortimer. Bougrelon lauds their “heroic friendship” while name-checking male “favourites” from history, antiquity and mythology – Buckingham, Antinous, Patroclus. But what need have we of subtext when the text itself is clear enough? “I exiled myself for a man,” states Bougrelon plainly. In Monsieur de Bougrelon the men are beautiful, powdered, tearful, wasp-waisted and desired, reminding us of Barbey d’Aurevilly’s On Dandyism and George Brummell and its description of dandies as the “hermaphrodites of history”. And that book’s moving scene of the mad, exiled Beau Brummell dining with phantoms in Calais can’t help but remind us of Bougrelon communing with his beloved Mortimer.

This – rather than just mooching drinks from his gullible compatriots – appears to be Monsieur de Bougrelon’s motivation: to speak, and in speaking to keep Mortimer alive. And it is this that lends the book its morbid vitality. In contrast to Wilde’s assertion that each man kills the thing he loves, Bougrelon avers that “[o]nly love resurrects the dead”, a flicker of promise that raises Monsieur de Bougrelon up, up out of the shadows, grief and mockery. It’s a tattered, patched-up, shop-worn hope, but hope it is.

To preserve this hope Bougrelon must remain in exile, dwelling in a France of his memory, “a France not yet disgraced by factories and parliaments”. If Monsieur de Bougrelon offers anything as banal, as bourgeois as a message it is that you can never go home again (an insight Barbey d’Aurevilly shared and the narrator, as we discover in the epilogue, ignores). Monsieur de Bougrelon is the original dandy in aspic. Lorrain’s book is an archive that arrests life at its moment of greatest beauty, preserved in vitrines, suspended in solutions, arrayed in filigree caskets like saintly femurs and the many foreskins of Christ.

It is a reliquary, in other words, and this is precisely the term that the astute Rachilde, loyal companion to Lorrain and fellow adherent of Barbey d’Aurevilly, applied to Monsieur de Bougrelon. The Decadent’s very vocabulary is a collection of lexical curios, recherché jewels here lovingly transferred to an English setting. A translator is sometimes tempted – even subconsciously – to file down the edges of challenging terminology. It’s a temptation Eva Richter rightly resists, instead offering us the “gelid pewter” of a frozen canal, the “serous pallor” of the severed head in an Old Master painting, a “quincunx” of women around a pond. They’re joined by rare metals (niello, antimony, peridot), archaic garments (gadrooned ruffs, cherusque collars, drugget cloth) and – indeed – strange flowers (hyssops, columbines, aconites).

It’s a singular and intoxicating experience that ends all too soon. When the “old puppet” departs the stage, you may well elect, as I did, to leaf straight back to the Café Manchester and wait for his silhouette to fill the doorway once more.

Monsieur de Bougrelon is issued by Spurl Editions on 1 November 2016.