James and the giant artichoke 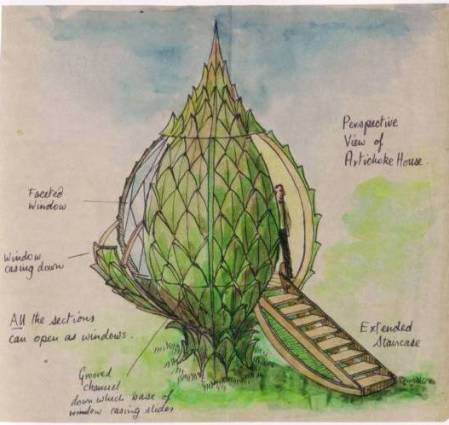 I ask little of my readers. But please, promise me this: if – through inheritance, games of chance or miraculous stock market windfall – you come into a large fortune, please spend it like Edward James and not David Siegel (or, y’know, go nuts with it and give it to charity or something…).

David Siegel, just so we may quickly dispatch him, is a Florida businessman who was bent on building this, a fist-gnawingly ugly pastiche of Versailles. The global financial crisis stopped work, which makes you realise that even a worldwide fiscal catastrophe has its silver lining.

English poet and sponsor Edward James, on the other hand, now there was someone who knew how to blow his considerable wonga on some seriously excellent shit. You may recall we dropped in on Las Pozas, his extraordinary Mexican estate to which he devoted much of his life. But long before that, James – who was born on this day in 1907 – was pioneering domestic Surrealism, as early as his university days when he decorated his Oxford rooms with Roman busts wired up so that music issued from their mouths.

Meeting Salvador Dalí liberated the already generous bounds of James’s imagination. He used his inherited wealth to bankroll the promising young Spanish artist’s career, as well as working with him on Surrealist objects for James’s homes. From this fruitful collaboration emerged such iconic pieces as the lobster telephone and Mae West lips sofa.

Working with interior designer Syrie Maugham, James turned his Lutyens-designed mansion Monkton House into a hypnagogic hallucination, a habitable theatre set abounding in decontextualised body parts and other amuse-oeils. A carpet preserves the wet footprints of his dog, disembodied hands caress a light fitting and another Dalí piece is a sight gag on the theme of “arm chair”.

Drapery is a recurring theme throughout the house. Usually used to soften right angles and deaden echoes, James uses it to disorient and perplex. Plasterwork turns the inside out, while his bedroom was swathed in funereal black velvet, inspired by Nelson’s hearse.

One of James’s most appealing projects was never realised. This strange flower planned – appropriately – to build a strange flower. Specifically, a pavilion in the shape of a giant artichoke (which is an edible thistle, botany fans). While pleasingly daft, this 1936 design was not entirely dissimilar to earlier works such as the 18th century folly, the Dunmore Pineapple.

For something which was essentially an outsized entrée it had an impressive pedigree, designed as it was by Sir Hugh Casson, later responsible for shaping the architecture of the Festival of Britain, and Christopher Nicholson, who numbered a studio for Augustus John among his long list of projects. Sadly it was never realized, and James turned his attention to Las Pozas.

Incidentally someone has built a giant artichoke; disappointingly not in my home country, whose vast repertoire of big things doesn’t run to the leafy delicacy, but in California).