Funny how it happens. Today I was planning to write about German performer Valeska Gert, one of the most visionary and influential avant-garde artists of the 20th century, generally regarded as the first practitioner of what was later termed performance art. But before putting finger to keyboard I took myself off to a fleamarket and what should I find there but a copy of her 1968 autobiography Ich bin eine Hexe (“I am a witch”).

Among other incidents the book describes is a recording session for prestigious label Deutsche Grammophon in the early 1960s. The aim was to record pieces Gert had sung in her 1920s heyday, but she was left cold by the producer’s insistence on technical perfection which, she felt, robbed the songs of their immediacy.

A happy outcome of this venture came after Gert sent a copy of the resulting recording to Federico Fellini, who was so intrigued that he summoned her to Rome, and she eventually appeared in his Juliet of the Spirits which heralded her return to film. [Aside: if you get the chance, do see Volker Schlöndorff’s 1976 film Coup de grâce, which Gert steals from her fellow actors despite her relatively small part.] 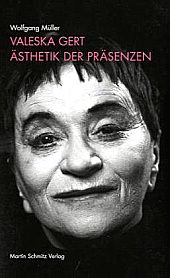 However omitted from the recording was one of Gert’s most compelling pieces, “Baby”. Deutsche Grammophon were aghast at the largely improvised bit of vocalese in which she inhabited the role of both baby and carer, switching between comforting sing-song and an infant’s mewling.  Now, almost 50 years later, the omission has been corrected with the release of the piece on a 7 inch single, still the hipster’s physical format of choice. It’s currently not rocketing up the charts anywhere, with its limited run of 400 copies ensuring that Gert’s posthumous pop career is unlikely to assume Gaga-esque proportions.

The unusual release was overseen by Wolfgang Müller, who was electrified as a teenager when he saw the elderly Gert on a talk show. He recently published a book entitled Valeska Gert: Ästhetik der Präsenzen, which made explicit the connections between Gert and post-punk performers like Nina Hagen and Müller’s own group Die Tödliche Doris, which brought the spirit of outré Weimar cabaret to 1980s Berlin with an absurdist/conceptual twist.