The sun of God 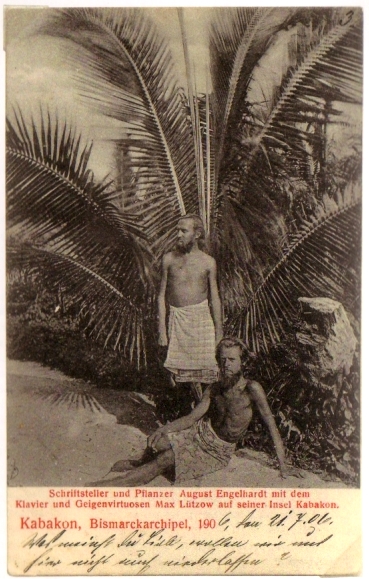 As the sun set on Germany at the end of the 19th century, the country’s mainstream and counterculture were drawing further apart. At the official level, militarisation, nationalism and Wilhelm II’s cult of personality all fed into a belated colonial programme. Here Germany’s entire motivation appeared to be: if France, Britain and even Belgium can have colonies, why not us? Future chancellor Bernhard von Bülow spoke for much of the ruling elite in 1897 when he insisted that Germany must have a “place in the sun” – possessions in Africa and other warmer climes alongside rival European powers.

But it was an entirely different form of sun-seeking that was preoccupying Wilhelmine Germany’s reform movement. Beginning in the 1870s with artist Karl Wilhelm Diefenbach, who advocated nude sunbathing and named one of his children Helios, progressive thinkers fled polluted, over-crowded cities in favour of natural settings to pursue simple – often vegetarian – diets and expose themselves to air and sun in loose clothing, or no clothing at all. They gathered in early communes and other improvised communities in Germany, or followed Gusto Gräser to Monte Verità in Switzerland to experiment with new ways of living.

Aside from the sizeable gaseous body around which their thoughts orbited, these two strains had little in common, with the exception of a figure who was an exception in almost everything he undertook: August Engelhardt, who was found dead 100 years ago today.

Born in Nuremberg in 1875, Engelhardt abandoned an early pharmacy apprenticeship to join a reform community in Germany’s Harz Mountains in 1899, readily absorbing its lessons in nature, naturism and natural food sources. Coming into contact with early fructivores (advocates of a fruit-only diet), he took their teachings even further and proclaimed that the world’s population could live on nothing more than the coconut, a food source he invested with divine qualities, noting that it grew closer to the sun than any other fruit. More than mere subsistence, he believed the fruit could offer eternal life. Were we all to dedicate our lives to coconuts and sunshine, Engelhardt believed, the trappings of civilisation – clothes, cities, power structures – would fall away and humanity would dwell in wantless serenity evermore.

With Germany offering little by way of coconut palms, or indeed opportunities for disrobing untroubled by hypothermia or the law, Engelhardt searched further afield. He was an early visitor to Monte Verità, but Europe was the past; the future – the simple, sun-drenched, stripped-down future – was waiting in the tropics. In 1902 he set off for Deutsch-Neuguinea, a colony that had recently been established in part of what is now Papua New Guinea, and acquired a coconut palm plantation on the tiny island of Kabakon. 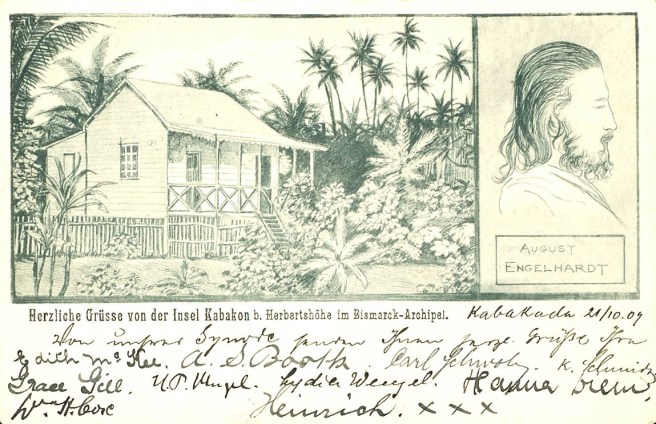 Having found his own place in the sun, Engelhardt styled himself as the ‘first apostle of the coconut palm’, wandered the island naked and let his hair and beard grow out to appropriately apostolic profusion, and established the Sonnenorden, or Order of the Sun, to codify and expand his belief system. He was out on his own, but that very singularity soon attracted others. “Come noble friend,” he wrote to prospective visitors, “you’re too good for Berlin.” Like Friedrich Ritter, his Weimar-era equivalent who pitched up on the Galapagos island of Floreana, Engelhardt maintained highly ambivalent relations with his fellow humans. He solicited followers while insisting on an eremitic distance from chattering humanity.

Max Lützow, a musician and conductor from Berlin burnt out by the demands of the concert circuit, turned up in 1904 and became one of the first adherents of the Sonnenorden. He was initially delighted with Kabakon. “I am convinced that anyone who comes here will stay here,” he proclaimed. Sadly this was all too true; the lifestyle that Engelhardt advocated was not merely ill-advised, it was lethal. The western inhabitants of Kabakon, never more than a handful, were perpetually sun-struck, plagued by insects and grotesquely malnourished, and the little utopian project had an alarming mortality rate. In the few surviving photos Engelhardt resembles an ebonised effigy of himself, the intercessor between humanity and an indifferent solar deity, half-broiled by the object of his veneration. The first visitor, Heinrich Aueckens, had died in mysterious circumstances a few weeks after arriving in 1903. In 1905 Lützow fulfilled his own prophecy, falling ill and then dying on the way to hospital in the colonial capital, Herbertshöhe. 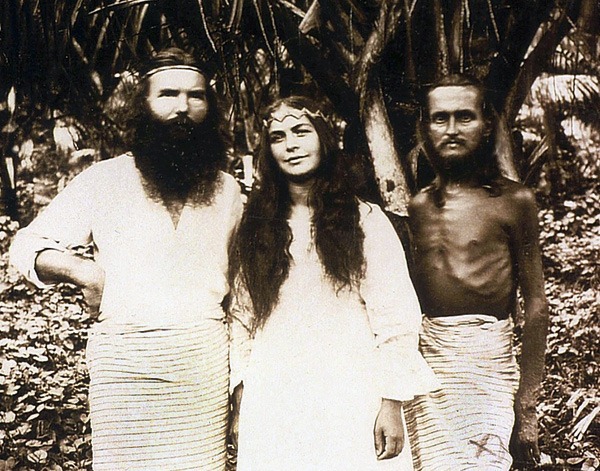 The arrival of August Bethmann and his fiancée Anna Schwab, one of the few women who appears in this story, brought a temporary change in fortunes. Bethmann proclaimed Kabakon to be a ‘a little place in the sun in the best sense’. In 1898, he had issued a pamphlet entitled Eine sorgenfreie Zukunft (A Carefree Future). Now he and Engelhardt expanded its message to incorporate cocovorism and its makeshift spiritual apparatus in a ‘new gospel’. They drew on the wealth of reformist literature at the time, but extended their teachings ad absurdum until they assumed the intensity of private mania, then improbably re-presented them to the world as a solution to its most pressing concerns.

The two Augusts pack a lot into the hundred-odd pages of the new Carefree Future – poetry, polemics, geographic data, spiritual teachings, agricultural statistics, a price list for coconuts and their derivatives (they rivalled any hemp bore with their exhaustive catalogue of coconut fibre products), advice on housing, lifestyle and diet, even fashion tips (“be nude”, essentially). The core message is that “earthly paradise is the logical, economic and natural necessity of human development,” and they conclude that “living in the tropics is the art of producing the highest quantity and quality of nutrition in the smallest area with the lowest expenditure of time and money.” Quality of life, they aver, decreases the further one is from the Equator. They describe Christ, Mohammed and Buddha as “children of the tropics”, although a definition of tropics that encompasses the West Bank, the Arabian Peninsula and southern Nepal is nothing if not generous. But in their radical relinquishing of materialism and desire, and their example of utmost simplicity in living, they did indeed resemble desert saints, fakirs or Buddhist ascetics.

In their text, Engelhardt and Bethmann exhibit a romanticised reverence for pre-industrial societies, and they criticise the colonial project for imposing western dress, for making both workers and consumers of indigenous populations, for introducing restless aspiration where contentment once reigned. They make a half-hearted appeal to German nationalist myth-making by claiming on uncertain evidence that Teutons once worshipped Teuto, a sun god. There is thankfully little of the naked racism of Elisabeth Nietzsche and Bernhard Förster’s Nueva Germania project in the Paraguayan jungle, although Engelhardt’s small community was entirely dependent on the labour of Kabakon’s Melanesian inhabitants. He was unable to cast off the racial hierarchies of Europe as readily as its costumes. 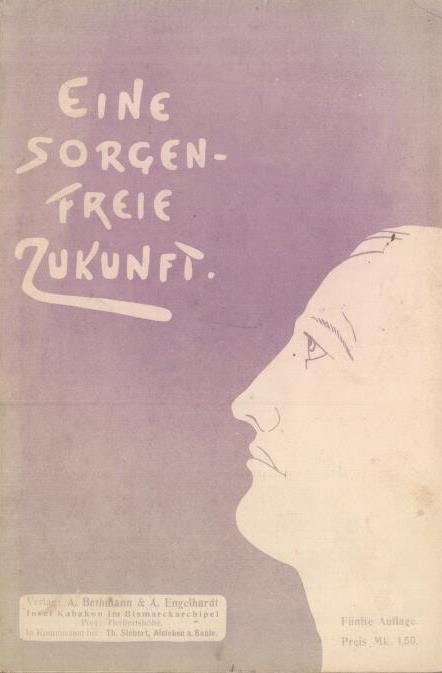 One question that goes unanswered is what exactly humanity should do with its (potentially limitless) leisure time once it is liberated from the rigours of civilisation. It wasn’t a question that Bethmann had to worry about; in 1906 he succumbed to the curse of Kabakon, dying in unexplained circumstances before he could board the boat that was scheduled to take him away. Engelhardt, whose possible role in the mysterious deaths of his fellow inhabitants has never been clarified, descended into paranoia and delusion, planning an empire that would encompass the entire tropical zone. But the world order was undergoing a much different transformation, and early on in World War One, Australian forces conquered Deutsch-Neuguinea, and interned Engelhardt before allowing him to return to Kabakon. Having persisted with his project for an impressive stretch of over 16 years, he was discovered dead on 6 May 1919. It is uncertain when he actually died.

The intense idiosyncrasy of Engelhardt’s headline beliefs and behaviours present an easy option to the present-day reader, a chance to enjoy a tale of exoticism and fanaticism safely quarantined in a zone of wilful eccentricity in which we might also locate his compatriot and contemporary, the carnie and self-styled King of Albania Otto Witte. It’s a tale easily played for laughs and indeed more than one German article about Engelhardt carries the headline “Ritter der Kokosnuss”, literally “knight(s) of the coconut” but also the title under which Monty Python and the Holy Grail was released in Germany. But Engelhardt is far more than just an oddball adventurer or chancer, and a deeper engagement with his story reveals extensive foreshadowing of present-day attitudes and concerns, and this blend of singularity and universality has proved irresistible to writers.

The first half of this decade saw a fictional run on Engelhardt, beginning in 2011 with Das Paradies des August Engelhardt by Marc Buhl, eclipsed the following year by another German writer, Christian Kracht, who issued the popular and critically acclaimed Imperium (English translation by Daniel Bowles published in 2015). There was talk of a film version with the star and director of the excellent Oh Boy – Tom Schilling and Jan-Ole Gerster respectively – which sounds like it had the potential to join the great Werner Herzog/Klaus Kinski collaborations in the cinema of tropical insanity, but that project has gone quiet. And in 2014 British writer Adrian McKinty picked up on the mysterious death of Max Lützow in the crime fiction of The Sun is God. McKinty’s book takes a Wicker Man turn – as though Summerisle had drifted to a more congenial latitude – when investigators close in and fear they themselves will become sacrificial victims. 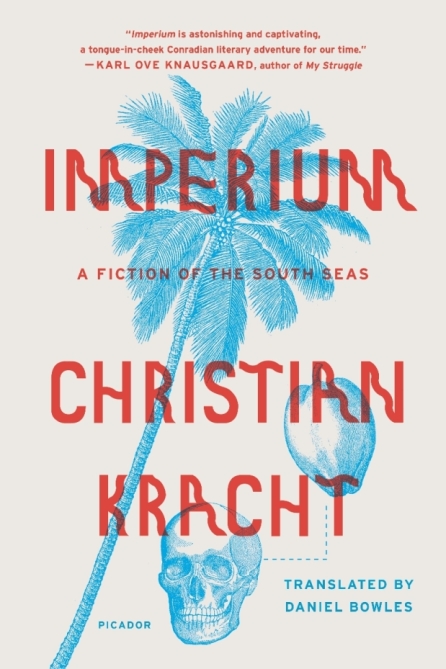 All three authors were aware that Engelhardt cannot be abstracted into type, and make no attempt to disguise his identity. But the universal, even mythic elements are there. The dream of humanity returning to the garden is as old as humanity itself. In the trope of the castaway or its inverse, the exotic visitor to European society, we witness the cultural memory of Eden (explicitly referenced in A Carefree Future) and the extraordinarily resilient allure of a simpler way of life.

Right now we seem to be living a particularly Engelhardtian moment, an age in which tech bros, resentful at having only a normal human lifespan in which to lavish their wealth on possessions, are trying to bio-hack mortal existence with rigorous dietary restrictions; an age of fructivores, juicing and the raw food movement; an age that has embraced the nutritional miracle of Engelhardt’s favourite fruit if the huge range of coconut products at my local organic supermarket is any indication. His solutions may have arisen through great leaps of illogic, but even that seems appropriate in this new gilded age of pseudo-science. While no one is recommending a coconut-only diet, you won’t struggle to find ill-conceived, ill-founded dietary advice on, say, Goop. And with versions of Engelhardt’s experiment playing out in numerous reality TV formats, you can even go on an expedition to Kabakon and play at scripted nano-fame yourself.

Engelhardt’s asceticism, while extreme, finds its analogue in a whole vocabulary of renunciation that features prominently in contemporary lifestyle writing – detoxification, decluttering, fasting, cleansing, flight-shaming and so on. But in his texts we also find an early run-through of some of the most critical questions of present-day society – how do we retain vegetation for the sake of the world’s climate, what is the optimal use of agricultural land, what is modern industrialised living doing to individuals, communities and the planet, how much do we really need to own and consume to live, and how much are the planet’s privileged minority willing to do without to ensure survival for all?

In one sense August Engelhardt’s story is a cautionary tale about the danger of living half-formed ideas to the full. But like other Wilhelmine visionaries, he long ago engaged with concepts that we regard as urgently contemporary. There’s nothing new under the sun. 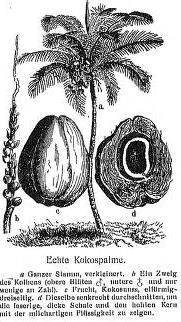