You’ll search Vatican annals in vain for a reference to Pope Hadrian VII. There’s no marble effigy of him in the great, gaudy expanse of St Peter’s, no tomb thronged with disabled devotees; he’s not even enrolled among the bad-boy anti-popes.

Hadrian, you see, was the fantasy projection of one Frederick Rolfe, otherwise known as Baron Corvo, the writer, painter, photographer and failed priest remembered today as one of literature’s great oddities.

Rolfe was born on London’s Cheapside 150 years ago today. His family, once modestly prosperous, had come down in the world, a fact which was the likely source of the burning Nietzschean ressentiment which would mark his entire life; Rolfe’s homosexuality and his 1886 conversion to Catholicism further alienated him from the Victorian mainstream. He turned initially to teaching and painting, his narcissism evident early on in a depiction of the young Saint William of Norwich, who unmistakeably bore Rolfe’s features, as did the other 149 figures crowding the painting.

But beyond his career was a calling, and Rolfe longed more than anything to be accepted into the priesthood. He pursued his dream to Scots College in Rome, 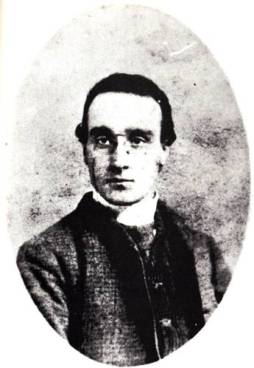 though it was soon apparent that he wasn’t quite the model of disciplined humility expected of a clergyman. Far from renouncing worldly goods, this would-be man of the cloth ran up debts with a local tailor who scandalised the college when he impounded Rolfe’s personal effects as payment. Nor was Rolfe’s habit of refusing canteen meals (claiming it was horse meat) and of wandering off-premises at whim likely to endear him to his fellow students.

The dream was definitively shattered with his physical expulsion from the college in 1889. There was no plan B. Rolfe returned to England battered and embittered with nothing to show for his Roman adventure but an alias, Baron Corvo, a title he claimed was bestowed upon him by an Italian noblewoman. Desperately poor, Rolfe tried his hand at early experiments in colour photography and underwater cameras, but these promising ventures brought no rewards. Hoping to do better out of literature, he had a number of stories published in the Yellow Book and issued a history of the Borgias. But Rolfe was his own subject, his own muse and ultimately his own tragedy, and the defining artefact of his colossal self-absorption was Hadrian the Seventh.

This 1904 roman à clef, a singular work of wish fulfilment, finds bookish, cat-fancying Englishman George Arthur Rose, a man who – like Rolfe – had been rejected for holy orders, being unexpectedly received into the arms of a penitent church. Then through a, shall we say, improbable series of events, the newly-minted priest is elected Pope (the scene where a dumbstruck Rose stumbles into the papacy is uncannily similar to the sequence in 1992 film Straight Talk which sees Dolly Parton’s character make an implausible entrée into broadcasting). 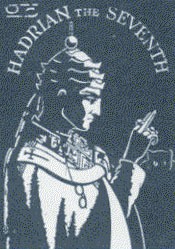 The (few) figures from Rolfe’s past who had enjoyed his sustained approval are rewarded with cardinal’s mitres, while his enemies appear as deceitful, ignorant grotesques. Rolfe places his alter ego at the centre of world affairs, re-ordering the pliant Great Powers in ways too bizarre to concern ourselves with here. Hadrian resembles a masturbatory fantasy in the way that improbable events are rendered in unusual detail, but this close observation also produced moments of eerie prescience, not least the idea of a non-Italian pope (bear in mind it had been nearly four centuries since the last one). Revolutionary Russia, the collapse of the Austro-Hungarian Empire and Germany’s aggressive expansion, the canonisation of Joan of Arc, the Vatican’s rapprochement with Italy, papal assailants – all were foretold in this frantic trailer for the rest of the 20th century.

Hadrian is a chain-smoking blur of decisive activity in ecclesiastical drag, issuing waspish ex cathedra pronouncements, drafting papal bulls in the royal ‘We’ to a primitive Dictaphone, occasionally pausing for a bit of soft-porn boy-ogling. But for all its undeniable camp, Hadrian is no romp. The bitterness is too overpowering, with page after page devoted to defensive justification of Rose’s – thus, Rolfe’s – conduct. Lyrical descriptive passages are often subverted by archaic or invented words, difficult and intrusive like the spikiest elements of Rolfe’s persona, the cat that lashes out when stroked too long.

Hadrian attracted admiration from D.H. Lawrence among others, but sold in pitifully small quantities and two months after its publication, Rolfe was evicted from yet another bedsit. Soon after, he received a fan letter from novelist Robert Hugh Benson, a fellow Catholic convert and son of an Archbishop of Canterbury. They briefly collaborated but typically, the alliance ended in acrimony. So too did Rolfe’s friendship with writer Harry Pirie-Gordon; the two planned to establish a semi-monastic order which aimed to “add to the learning of the world”, for which Rolfe busily designed devices and costumes. This, also, was typical; Rolfe was invariably drawn to prissy, fastidious fields of knowledge like heraldry, pageantry and genealogy, exhibiting a lifelong preoccupation with the superficial, decorative and ceremonial. As one of his fellow students in Rome observed, “church matters were mostly a matter of millinery to him.”

Rolfe was convinced that his path to glory, seemingly assured by his talents, was barred by a loose cabal of publishers, landladies, ex-friends and, above all, English Catholics. A toxic combination of paranoia, entitlement and narcissism made Rolfe his own greatest enemy and a lot of other people’s greatest enemy as well. Even at this juncture it is possible to imagine a correspondent’s despondence on receiving a letter addressed in Rolfe’s idiosyncratic script, a catalogue of sufferings wherein his righteous rage would break free of standard vocabulary to leave him spluttering neologisms. Rolfe was in effect writing his own hagiography, meticulously detailing the wrongs suffered with saintly patience at the hands of heathens that we the living may burn with his fury and beg for his forgiveness.

In 1908, Rolfe made the acquaintance of noted archaeologist Richard Dawkins, who would inevitably fall out of favour, but not before generously offering to take him on an expedition, which eventually found the pair in Venice. Rolfe had already burnt all his bridges in England, and he would never set foot in his homeland again.

For a time it seemed as if this eternal misfit had found asylum at last, and he euphorically described medieval chapels and lithe gondoliers, midnight swims and dreamless sleep. The reverie, naturally, didn’t last. Rolfe had by now perfected the reverse alchemy of turning friend into foe and opportunity into disaster, and lived for the main in utter penury, sometimes sleeping in boats or out in the open. His correspondence of the time alternates between bitter complaint and abject begging, often in the same letter. “I am now simply engaged in dying as slowly and as publicly and as annoyingly to all of you professing and non-practising friends of mine as possible,” he announced at one stage, tellingly suggesting that his friendship should be regarded as a vocation.

Despite pornographic letters supposedly detailing his Venetian exploits (“an existence compared with which Nero’s was innocent, praiseworthy, and unexciting,” blushed his first biographer), it remains uncertain whether Rolfe actually engaged in the acts described, or any carnal act, with anyone, ever. As Hadrian put it, “there was no one to bit and bridle me, to ride me, and to share his couch with me.”

And then in 1912, at the eleventh hour, in a miraculous reversal of fortune worthy of one of his own novels, the clouds parted over the Veneto and Rolfe found a patron in the form of a book-loving Rosicrucian priest to keep him in a style to which he soon became accustomed. He promptly upgraded his boat to something altogether more regal, moved into a hotel and dyed his receding hair, just like Death in Venice‘s boy-chasing Aschenbach (the 1911 Venetian interlude which inspired Thomas Mann’s semi-autobiographical novella coincided with Rolfe’s time there). It seems he even found the other half he had long sought, in the form of Thomas Wade-Browne, a fellow drifter with boundless patience and a built-up shoe.

Sadly all of this came too late to sustain him. Weakened by his privations, Frederick Rolfe died in 1913 at the age of 53.

Next: Frederick Rolfe in the afterlife