Goddess of the night

Anita Berber was hardcore. How hardcore? Leni Riefenstahl was her understudy.

In time Berber would exert a huge impact on Weimar Berlin, whose excesses and experimentation she both embodied and surpassed. Simply, in a period when Berlin was rethinking art, politics and life itself, Berber was going further than anyone else, blurring the line between life and performance, setting new standards for scandal and audacity.

She was, for example, the first to make the tuxedo fashionable for women (a look copied by her one-time lover Marlene Dietrich). But it was what she wore – or rather didn’t wear – onstage that ensured her infamy, frequently appearing nude or in costumes so revealing they may as well have not been there. But she wasn’t offering a wholesome celebration of the human body; Berber’s stark, dark vision reflected back the depravity and corruption she saw around her. After all, the prostitution which was rife during hyper-inflation was not an expression of permissiveness but rather of hunger; families simply sold their younger, more attractive members to the highest bidders, often foreigners with hard currency. Berber herself, prodigiously bisexual, supplemented her stage fees with prostitution.

Despite being one of the most oft-depicted women of her era, it’s very difficult to get an idea of what Berber actually looked like. In photos she holds choreographic poses or presents a mask-like face. Berber also posed for a portfolio of erotic drawings and – more incongruously – a porcelain figurine, while Otto Dix’s famous portrait seemed to presage a wasted middle age she never actually stuck around for. This ability to subsume herself into a role made Berber a natural candidate for Germany’s then-flourishing film industry, though most of her dozen or so screen appearances are now lost or forgotten, apart from a brief appearance in Fritz Lang’s Dr Mabuse, and the pioneering gay-themed film from 1919, Anders als die Andern (“Different from the Others”), co-written by Magnus Hirschfeld.

Whatever boundaries Berber had hitherto observed were left behind when she met kindred spirit and fellow dancer Sebastian Droste. Both were enthusiastic consumers of cocaine and other drugs, and out of their narcotic delirium emerged the stage show Tänze des Lasters, des Grauens und der Ekstase (“Dances of Vice, Horror and Ecstasy”). One set piece saw Droste on the gallows, ejaculating in his death throes over a supine Berber (Dancing with the Stars producers, take note). They also co-wrote a book which featured illustrations as well as expressionist poems from the two (one of which, in translation, provided the name Strange Flowers). In a sense Berber and Droste were packaging the underworld for the bourgeoisie, Grand Guignol style, allowing the more adventurous of Berlin’s middle class to dip a toe into the gutter without muddying their spats. 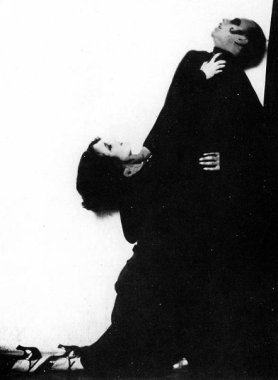 But in both her stage and screen appearances, Berber grew increasingly unreliable; she would turn up hours late for appointments, suffering the effects of drink or drugs. All of this naturally took a toll, and Berber didn’t make it to the 30s – her own or history’s. She died in Berlin in 1928 aged just 29, and was buried in Neukölln, a few streets away from where I write this. The lease on her grave expired without renewal, the headstone has long since disappeared.

This flurry of attention turned Berber into something of a latter day underground heroine, turning up as a skateboard motif, tattoo, a song subject. And as previously reported, a movie about her is in production. It’s astonishing that filmmakers have taken so long to reanimate a figure whose story offers drugs, sex and generous portions of full-frontal nudity. Actually, German filmmaker Rosa von Praunheim did kind of take on Berber in his 1988 film Anita – Tänze des Lasters, but Berber’s life was relayed in flashback as the “reminiscences” of an elderly woman (played by the extraordinary Lotti Huber) who lands herself in an asylum claiming to be the long-dead dancer. If nothing else, it was prophetic in its reflection of the Berber myth, which still refuses to die.