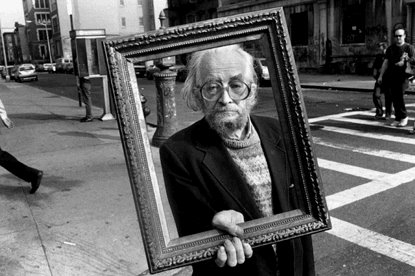 Reading through Harry Everett Smith‘s CV, it’s hard not to believe that it belongs to several people who happen to have the same name. This American maverick was a tireless archivist of American folk and blues music, a music producer, a gifted abstract painter, a prodigious collector and an explorer of the less trafficked byways of mysticism, to name just a few of his occupations.

He was also a pioneer of underground film, the forerunner of Andy Warhol and today’s avant-garde filmmakers and video artists. His earliest film experiments, like those of Kenneth Anger, date from the time of the Second World War. And like Anger, Smith was steeped in the occult and believed that film, liberated from linear narrative, could be a conduit for magic.

With the most limited means, and sometimes just by painting directly onto the celluloid, Smith made geometric shapes dance in hypnotic patterns throughout his early works. No part of Smith’s life was completely divorced from another, and so his research into music informs the visuals, with their pattern of theme and variation and seemingly improvised digressions; early films were meant to be accompanied by Dizzy Gillespie records. Titles like A Strange Dream, Circular Tensions, Mirror Animations, The Magic Mushroom People of Oz and Message from the Sun serve to illustrate his formal and thematic preoccupations as well as the fact that he was frequently out of his freakin’ gourd.

Certainly it must have taken a lot of drugs to make, and indeed watch Heaven and Earth Magic, which was 6 hours long in its original incarnation. At times it looks like an animated Max Ernst collage, at other times like nothing you’ve ever seen or will see again.

Smith’s most ambitious film work, Mahagonny, was inspired by Bertolt Brecht’s Rise and Fall of the City of Mahagonny and was meant to be shown on four projectors with incredibly complicated music cues of Smith’s devising. The film featured, among others, Smith’s fellow Chelsea Hotel residents Allen Ginsberg and Patti Smith, both of whom were recently named among the 400 most influential New Yorkers (Harry was a curious omission). It was shown a half-dozen times in 1980, and then effectively disappeared until a team of experts recently restored the prints and worked out how to put the damn thing together again. Read more about its genesis and challenging restoration.

Strange, bewildering, mesmerising, inspiring — Harry Everett Smith’s works are among the earliest and most persuasive examples of abstract filmmaking.