Today we visit a masterpiece of al fresco Surrealism created by British poet and patron Edward James, who died on this day in 1984. 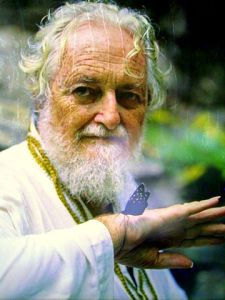 James was born in 1907 into a family with great wealth but little in the way of affection. One of his oft-told anecdotes has his mother dressed for church one Sunday, instructing the nanny to summon one of the children to accompany her. “Which one, Madam?” the nanny asked, to which she replied “Whichever goes best with my blue dress”. Packed off to boarding school, James was further traumatised by the harsh discipline and retreated into his own rich imagination.

As an adult, it was as a patron of the Surrealists that James found both a use for his inherited fortune, and a circle of friends in which the tics and oddities planted in his loveless upbringing were comparatively normal. The career of Salvador Dalí in particular received a crucial boost from James. Not just a patron and collector, James transformed his house to reflect the dreamworld of Surrealism (Dalí suggested a room with throbbing walls based on “a sick dog’s stomach”; it remained sadly unrealised). With Charles de Beistegui, James was at the vanguard of those who blasted Surrealism off the canvas and into the built environment.

Forever restless, James settled first in New Mexico, then went exploring in (old) Mexico, chasing whims and fantasies. It was in pursuit of a strange flower, specifically a rare orchid, that James first stumbled upon Xilitla, about 25o kilometres due north of Mexico City, high in the jungle covered mountains.

In 1947 he purchased 32 hectares and began transforming the estate, a task which would occupy him for the rest of his life and become his greatest work. Las Pozas (“the pools”), as it was named, stands in a tradition of eccentric landscaping that includes the gardens of  Quinta da Regaleira in Sintra, Portugal and Park Güell in Barcelona, designed by Gaudì. And like James, the original owners of those properties (respectively, António Monteiro and Count Eusebi Güell), were worldly aesthetes with the means and vision to create their own fantasy worlds.

Las Pozas provided work for around 100 local workers, but James was an erratic foreman. He could be generous and affable, but he was also capable of despotic rages. An incident in which he was struck by a tree trunk rolled down a hill was, he believed, no accident. It left him reliant on a cane for the rest of his life.

It was a freak incident in 1962 which largely determined the current format of the garden. A rare snowstorm covered the slopes of Las Pozas and, most devastating for James, killed thousands of his beloved orchids. He decided to “plant” structures which could withstand any weather, and so now some 200 bizarre concrete forms dot the estate.

These constructions bore names straight out of the poet’s verse, like “Bathtub shaped like an eye” and “House with a roof like a whale”, and were sometimes painted in shrill colours by James himself. Just as the teeming jungle of Las Pozas can scarcely be called a “garden”, the word “folly” — suggesting whimsical structures on manicured English lawns — is unequal to the task of defining these enormous objects rising, half-dream, half-nightmare out of the jungle.

Since James’s death, however, the jungle has threatened to overwhelm even these hardy perennials, and a foundation was formed in 2008 to ensure that Las Pozas can be enjoyed by the next generation of oddity enthusiasts.