It is one of the stranger coincidences of British cultural history that two of its most renowned bohemian artists were both born in the Welsh seaside town of Tenby. In fact so readily identified with bohemia were Augustus John and Nina Hamnett that they were styled, respectively, as the king and queen of the autonomous, borderless realm.

Tenby is, as Jan Morris writes in The Matter of Wales, “the most absolutely un-Welsh of all the towns of Wales”, looking “as though it has been deposited there in toto from somewhere altogether different”. You can see her point as you approach the town over the rippling, rivuletted hills of the hinterland, dotted about with rotting castles and double-glazed hamlets, each with its own comically dour chapel. As you make the last descent it is suddenly there, its medieval wall warmly embracing a carnivalesque array of tall houses stretching expansively along soaring cliffs guarding vast sandy beaches, the whole ensemble tenderly crouching down at its mid-point to caress a little harbour. Dazzling sunshine, not the first thing you’d associate with late-winter Wales, enhances the sense of unreality. Steeling ourselves for the full Morrissey “Everyday is Like Sunday” experience, Partner and self instead encounter something altogether more Mediterranean.

Like the Morgans of Tredegar House, Tenby hitched its wagon to the Tudor star, introducing a period of trading prosperity which ended when the town picked the wrong side in the English Civil War. This long downturn only turned around again in the 19th century when the town became a sought-after holiday spot. “Today it is all tourism,” says Morris. “The harbour built for the merchantmen and the fishing-fleet is given over to pleasure-craft, and most of those waterfront houses are hotels and boarding-houses. Still, the little town feels above all industrious and astute, as though its merchants are still hard at work at their lading tables, or awaiting a shipment from Flanders on the rising tide.” 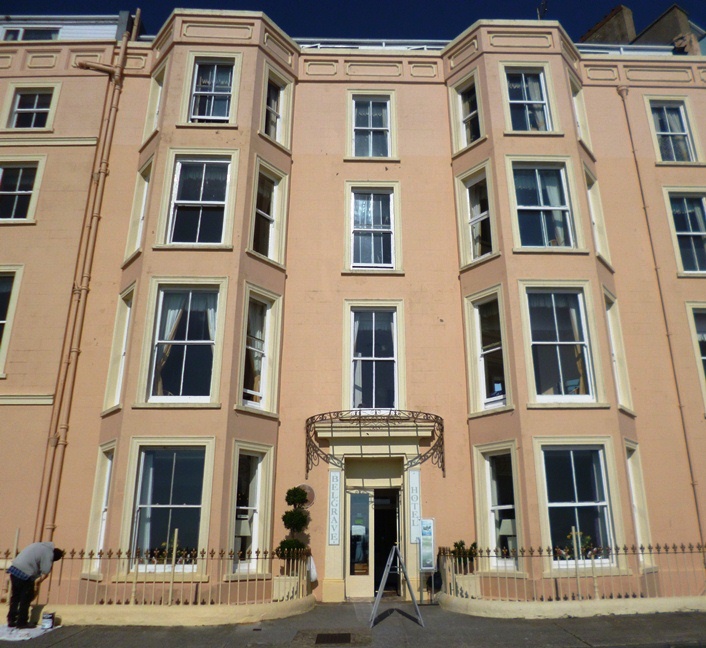 In 1878, Augustus John was born in one of those waterfront houses, a stout, bay-windowed building outside the walls, looking out to sea which today is a curious milky olive colour. Biographer Michael Holroyd lyrically evokes young Gus’s love of his first home:

In particular he loved the harbour at Tenby with its fleet of luggers and fishing-smacks, and the russet sails of the trawlers; and the long expanse of Tenby beaches, their sand spongy like cake – a golden playground two miles long. Here, while still very young, Gus would play all day with his brothers and sisters, catching shrimps in the tidal pools where the sea-urchins delicately flowered, paddling through the waves that seethed and criss-crossed the shore, and elaborately hauling buckets of sand up the blue slate-coloured cliffs. Where the sea had worn these cliffs away, devious caves had been hollowed out, as if gnawed by giant sea-mice – dark, dangerous and exciting. Slabs of slate rock lay bundled at the entrances, covered with barnacles and emerald seaweed. 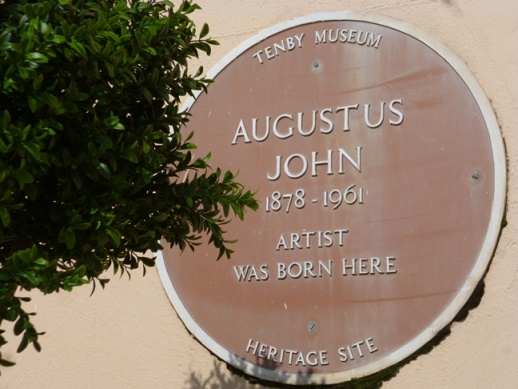 When John senior cautioned Gus about the dangers of gypsies, he deliberately sought them out in an encampment outside Tenby and soon adopted their ways, setting a template for bohemian living whose after-effects are felt to this day. “We are the sort of people our fathers warned us against!” as Augustus later said to Nina Hamnett.

She, meanwhile, was born in Tenby on Valentine’s Day, 1890. Her birthplace is approached from a small gated lane, but viewed from the rear it becomes apparent that these houses occupy the most dramatic position in a town not wanting for architectonic theatrics. With her officer father often absent on military duties, Nina was left largely in care of her grandmother, as Denise Hooker writes in Nina Hamnett: queen of bohemia:

Nina resisted all her grandmother’s efforts to make her behave like a lady and roamed among the sand-dunes, exploring the caves cut deep into the cliffs. Her favourite occupation was sitting alone at the end of the pier, fishing for pollock and sprats. She made friends with the bathing-machine boys, who taught her their extensive vocabulary of swear words. Nina could stand her own with any of the boys and did not hesitate to express her dislike of the local butcher-boy by kicking over his tray of meat and punching him in the stomach. She had equally violent arguments with her grandmother, who was quite unable to control her.

Strangely Nina and Augustus never crossed paths in the small town. Once in London Hamnett would occasionally follow John down the street at a starstruck distance, and only later in London’s Café Royal did their friendship develop as they bonded over their shared background, and they became twinned fixtures of the capital’s bohemian haunts. Augustus remained loyal to Nina in her long decline. 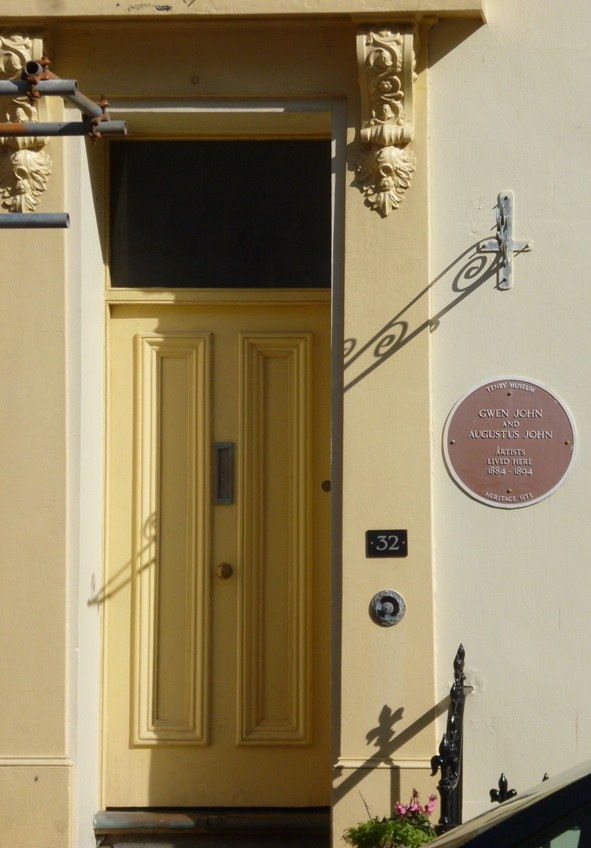 There is a third painter to mention here, also a noted portraitist: Augustus’s older sister Gwen John. Although born in nearby Haverfordwest, she grew up in Tenby, in a house just off the cliff-top promenade where her younger brother was born. “The local inhabitants of Tenby in the late 1880s and 1890s thought the Johns very bohemian and wild,” notes Gwen’s biographer Sue Roe. “As small children they played on the beach without shoes or socks; now they began to pay the local children to go with them to their attic bedrooms in Victoria Street, where they would paint their portraits.” 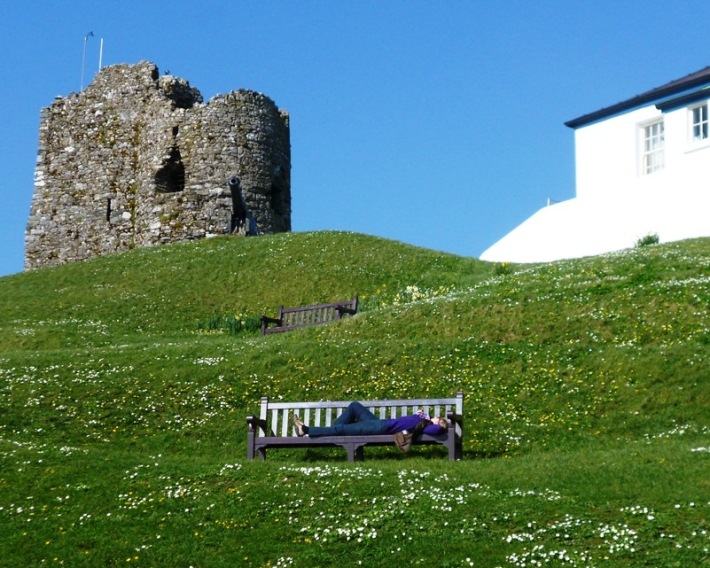 All three were vividly contrarian spirits, the wide-open skies and churning waves of Tenby having instilled a wild restlessness in them along with a longing for farther shores. They were all called to France before the First World War: Nina took to the zinc bars and cabarets of Montparnasse as if born to them, Augustus adopted the Provencal town of Martigues as his own. Gwen, meanwhile, embarked on an affair with Auguste Rodin, more than twice her age. When his passion cooled her obsession only increased, and among the papers of Rodin’s estate are over a thousand letters from her. She later turned to Catholicism and led a reclusive life in stark contrast to the revels of her fellow Tenbian bohemians. 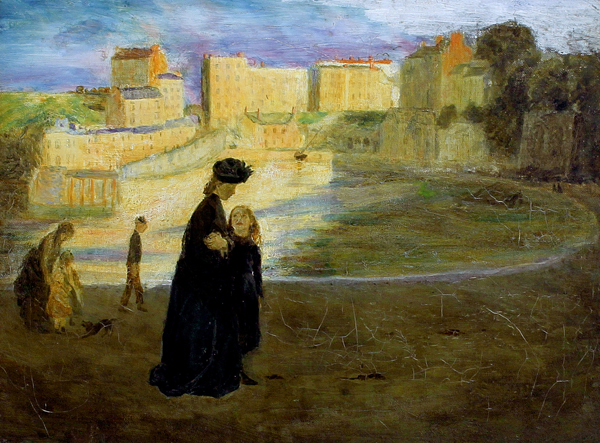 One of Augustus John’s last public acts before his death in 1961 was to return to Tenby to accept the Freedom of the Borough. On that occasion he recalled his childhood rambles, claiming “I could take those walks again now and I don’t think I would get lost.” But our own explorations are over for now and after a bag of hot chips overlooking Carmarthen Bay, we leave this distinguished trio in the last of our trio of Places as Partner and self head for the wild and holy hills further west. 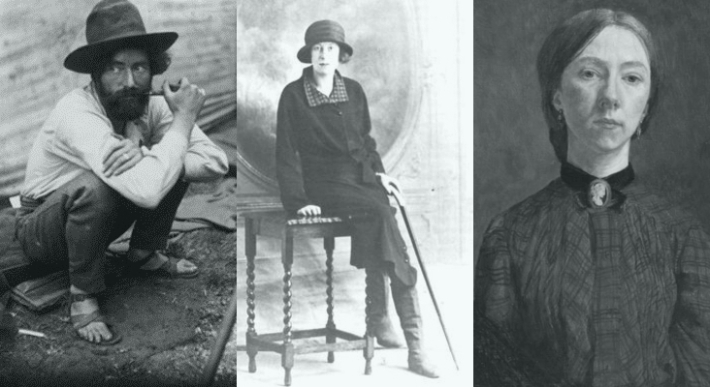