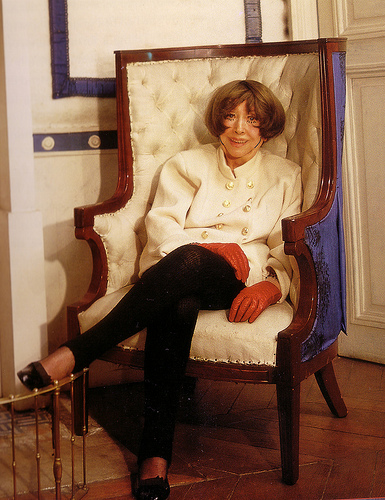 In her long life, French decorator Madeleine Castaing had a huge influence on interiors, helping to revive interest in 19th century styles long out of fashion. She took relatively cheap materials and mis-matched furniture and combined them in virtuoso arrangements of Second Empire-inspired eclecticism which are still being imitated today. She was also, with her husband Marcellin, a patron and collector of young artists, amassing the largest ensemble of Chaïm Soutine paintings in private hands.

Castaing was, as this photo indicates, just as innovative in her own presentation. She is pictured at 96 in her Left Bank antique shop, now a branch of patissier Ladurée (a macaron‘s throw from the site of Natalie Clifford Barney‘s salon). As well as the Tammy Faye-esque maquillage and the granny-strangler gloves, the especially observant among you will have noted not just the wig, but the chin strap holding it on.

What does it all mean? It means if you can boast a life so long that it coincided with the Dreyfus affair at one end and the collapse of Communism at the other, you can wear whatever the hell you want.