Hello patient readers and – dare I say – friends. Apologies for the silence, but I return to assure you I have not been idle. I have, in fact, set up a small press issuing translations of historical texts, and the first two books are coming out this November.

The new creation is Rixdorf Editions, and it aims to cast light on an era which is misunderstood to the extent that it is thought of at all. I speak of the German Empire, specifically the Wilhelmine period from 1890 to 1918. It is a period that historians tend to rake over for the First World War and the factors that contributed to it. Big, important topics, of course, but what sadly happens in the analysis is that the era is largely written off in bullet points (authoritarian control/population expansion/industrial growth/reactionary culture/increasing militarism) which ignore the astonishing wealth of alternative, progressive, even radical voices present in the culture. The Rixdorf Editions list aims to reflect this diversity with fiction and non-fiction publications from the era in original English translations, initially my own, available as paperbacks or e-books.

I truly hope this is something that you as discerning Strange Flowers readers will appreciate, dealing as it does with hidden cultural history, forgotten innovators and compellingly wayward souls. 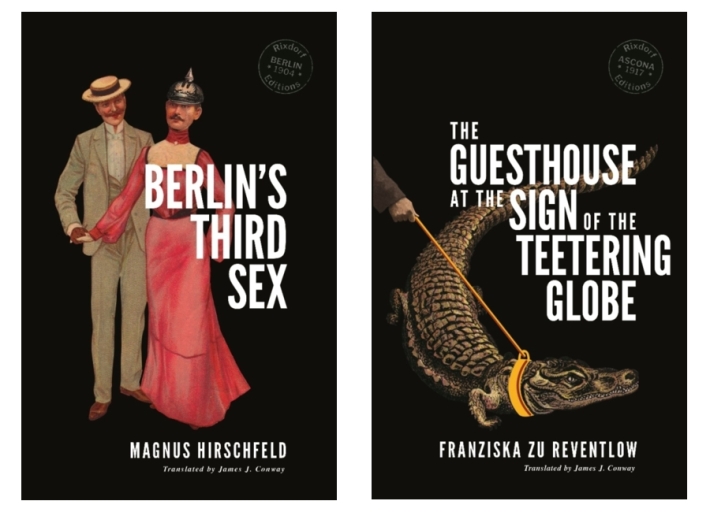 The period in question has increasingly captured my imagination in the 11 years I have lived in Germany, as a number of posts here testify. Variously we have looked at bohemian Munich around 1900, the lifestyle reforms of the original hippie Karl Wilhelm Diefenbach, the public performance of Else Lasker-Schüler, the first warning shot of Dada, the Wilhelmine origins of the counterculture, cosmic writer Paul Scheerbart, the pre-Weimar launch of radical Weimar performance, polymath diarist Harry Graf Kessler, Jugendstil architect and theorist August Endell, and most recently ‘bohemian countess’ Franziska zu Reventlow.

And it is from Reventlow that the first fiction title comes. The Guesthouse at the Sign of the Teetering Globe is a collection of strange, beguiling short stories originally issued in 1917, which diagnose a world in violent transition with wry humour and a profound sense of the uncanny. Meanwhile, the first non-fiction title is Berlin’s Third Sex by Magnus Hirschfeld, a field report from the amazingly vital gay and lesbian subculture in the German capital at the dawn of the 20th century. A foundational text of gay identity, it reads more like something from the Weimar era, or last week. A further two titles will be appearing in the (northern) spring.

The books are designed by Cara Schwartz and they’re looking fantastic. I’m very proud of them and would be delighted to share them with you and have your company on this journey. You will be able to get them through bookstores in the UK and Ireland, and the website will soon be set up for direct sales to the rest of the world (and, yes, there’s always Amazon as well).

“But James,” you say, “how do we keep abreast of developments, what bewildering plethora of communication options do you have for us in this age of compulsive connectivity?” Well, there’s the website, naturally, with its own blog, and the option of signing up for a newsletter, and I will be tweeting at a languid pace, or you can head to Facebook and like Rixdorf Editions to have your wall occasionally bespattered with news (although the social media presence will be a little slow to begin with).

And for anyone who happens to be in Berlin I will also be venturing into the non-virtual world on 9 November to read from the first two books – details soon.