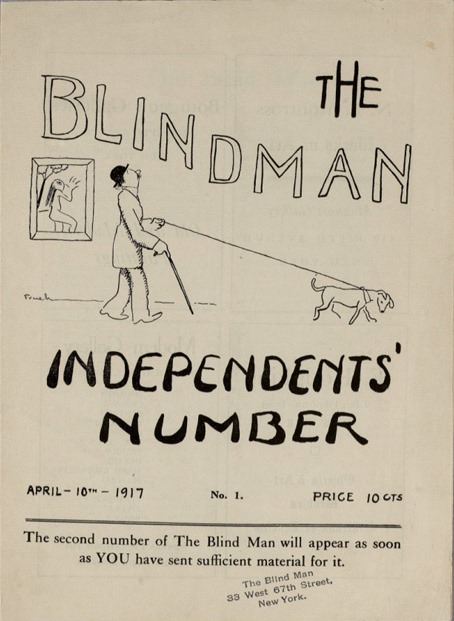 Patricia and Pierre were having trouble collecting the forty dollars for the paper for the Magazine. People were asking what it would look like. Victor had said: “The likes of it has never been seen before.” They could only repeat that. People were asking if it would come out every month or quarterly. Victor had said: “Well, we shall see. All we’re concerned about is a first issue.” In the end it was Patricia’s belief and Victor’s influence with a friend which convinced Desti cigarettes and Preston Sturgess to place the advertisements which rescued them.

The first issue came out in time for the opening of the first “Independents” show in New York, which had been instigated by Victor. The title was “The Blind Man”. On the cover was a drawing by Alfred Frueh of a dog dragging a blind man through a gallery of paintings. Apart from one which didn’t really fit, the articles were free expressions of pure fancy and a challenge to the orthodox.

The first thing to say about the extract above, from Henri-Pierre Roché’s Victor (in Chris Allen’s translation), is that it is part of a text that was never finished. The manuscript in Roché’s hand was in a rudimentary state on his death in 1959, first published in French in 1977 and in this version in 3 New York Dadas + The Blind Man, a highly recommended 2013 title issued by Atlas Press.

The second thing to say is that the text reflects real people and events with varying degrees of encryption. So there really was a journal called The Blind Man, its cover was precisely as defined and in fact the launch described above, marking the first day of the first Independents’ exhibition in New York, happened 100 years ago today. The publication really did carry an advertisement for Desti cigarettes, but the involvement of the (here misspelt) dramatist and screenwriter Preston Sturges is a mystery. The identities lurking behind the other named participants, however, were clear enough: Patricia was the sculptor Beatrice Wood, the titular Victor was Marcel Duchamp and Pierre was Roché himself. In detailing not just the trio’s cultural production but their entangled romantic attachments as well, Roché seems to be returning to the roman à clef à ménage à trois that he had pioneered in Jules et Jim, in which he played Jules to Franz Hessel‘s Jim.

Roché, Wood and Duchamp were the creators of The Blind Man, a small, combative publication that could not have emerged at a more fractious time. The US had just joined the war in Europe, the Romanovs had already been swept from power in Russia’s first revolution of the year and within days Vladimir Lenin would steam into the Finland Station to set the second in motion. The world was turning on its head and at the opening party of the exhibition Mina Loy‘s existence was upended by her first sight of Arthur Cravan; each was to be the other’s One (although they didn’t actually meet until the Independents Ball, ten days later). Cravan naturally features in Roché’s account, although under his own name. Perhaps it was an aide-memoire that Roché was going to substitute later; perhaps Cravan had sufficiently mythologised himself that he passed muster as a fictional character.

The Blind Man was Dada in all but name. A good deal of the first issue was taken up with Roché’s programmatic text which reflected the entwined aims of the journal and the exhibition, their shared vision of a confident avant-garde finally ready to shake off the long 19th century. Rounding out the eight pages were articles by Beatrice Wood and Mina Loy in praise of the new independent spirit that had come to the New York art world. 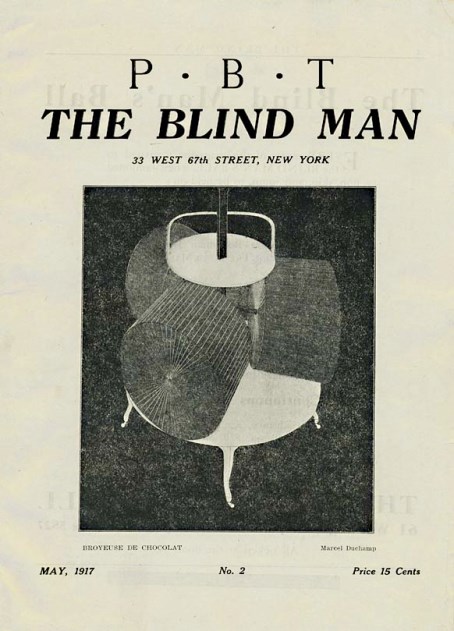 But the Independents show was most famous for what it didn’t feature – Duchamp’s Fountain, a urinal “readymade” by the pseudonymous “Richard Mutt”, refusé by the refusés. The second issue of The Blind Man, twice as long as the preceding number, turned against the exhibition, and included a photograph (by Alfred Stieglitz, no less) of the porcelain provocation otherwise withheld from the public’s gaze, the only record of the piece which was subsequently lost.

As Dawn Ades notes, the first commentators on what was possibly the most notorious artwork of the 20th century were women, Beatrice Wood and Louise Norton. Not only that – Duchamp recorded that “One of my female friends under a male pseudonym, Richard Mutt, sent in a porcelain urinal as a sculpture.” It was submitted with Norton’s phone number from which Ades concludes that this female friend was Norton herself. But in her biography of Elsa von Freytag-Loringhoven, Irene Gammel seizes on the confected provenance of the work, with artist and object both apparently hailing from Philadelphia and – noting that Baroness Elsa was in Philadelphia at the time – speculates that in fact her subject was behind the work. Freytag-Loringhoven’s own sanitaryware piece God arose the same year, and may even have pre-dated Fountain. And even before the First World War, the woman later dubbed the “Dada Baroness” had found a piece of metal on the street and declared it to be an artwork with the same sovereign determination that Duchamp would later invest in his readymades.

The cover of the second issue – which bore no resemblance to the first – featured Duchamp’s Broyeuse de Chocolat. The issue further contained an appreciation of the artist Marie Laurencin by Gabrielle Buffet, verse by Francis Picabia, Walter Arensberg, Charles Demuth and Erik Satie, and a drawing of Edgar Varèse by Clara Tice (who also contributed to Bruno’s Weekly). The issue signed off with a request slash challenge: “Brave people who like to run risks may send to THE BLIND MAN five dollars as subscription and encouragement.” Few were the brave, it seems, for after just two issues, The Blind Man met the most Duchampian demise imaginable, when Roché lost a chess match to decide whether he or Picabia, publisher of the rival 391, would forge ahead in the micro-market for Dadaist journals.

For further exploration, the Atlas Press collection contains annotated facsimiles of the two issues, the translation of Victor, along with an introduction by Dawn Ades and an extract from Beatrice Wood’s memoirs, I Shock Myself. And, as noted in January, Ugly Duckling Presse are publishing a centennial edition later in the year which brings together reproductions of The Blind Man as well as the one-off title rongwrong, which documented the Roché-Picabia match, along with other related material and extensive commentary. 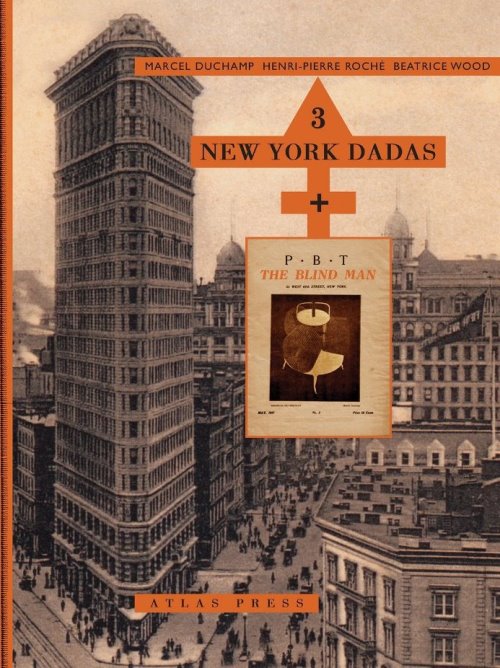