In keeping with a theme, this – a look ahead at books of a Strange Flowers flavour coming out this year – was going to be “17 books for 2017”. But so many interesting titles have gathered on the horizon that I had to abandon the conceit altogether. Here, then, is a metric shitload of books for 2017. 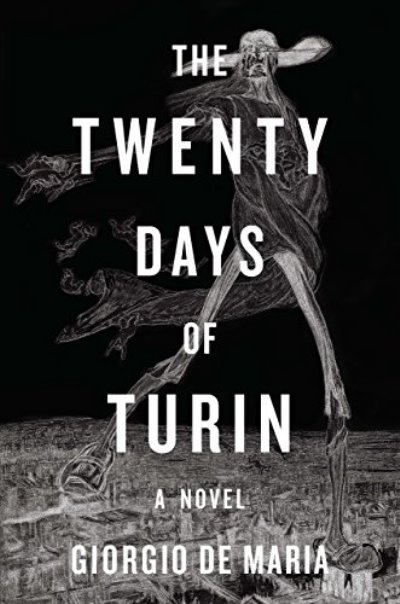 It is a year in which the news already resembles dystopian fiction, so might books like Giorgio De Maria’s The Twenty Days of Turin tell us how it all ends? Originally published in Italian in 1977, this grim parallel parable draws on the occult allure of Turin, and features mysterious outbreaks of savagery and intimate thoughts being communicated “across the ether” (cf. right now). Thanks to translator Ramon Glazov it is now finally available in English. Joining it in a violent speculative realm is China Miéville’s The Last Days of New Paris (already out in the US, due in the UK next month). With Nazis, André Breton and our old friend Jack Parsons, this is a “what if?” scenario far more feverish and bizarre than The Man in the High Castle. 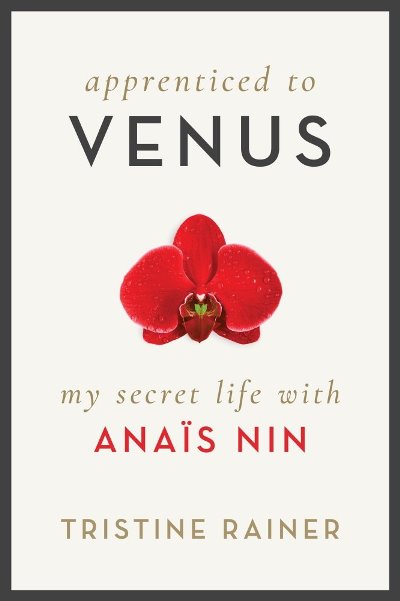 I’m not entirely clear why there is a run on Anaïs Nin right now; tomorrow marks 40 years since the famed eroticist’s death, but that’s hardly a red-letter anniversary. There was a rumpus last year about a volume of her previously undiscovered porn-for-hire entitled Auletris [aside: the uncredited cover image of the book was apparently taken from a drawing in Nin’s possession; might it possibly be an Alastair?]. Anyway, as they say – a dirty book gathers no dust. Two new titles show Nin in close-up and wide shot (Tristine Rainer’s Apprenticed to Venus: My Secret Life with Anaïs Nin and Anita Jarczok’s Writing an Icon: Celebrity Culture and the Invention of Anaïs Nin, respectively), while a forthcoming new volume of unexpurgated diaries from the woman herself, Trapeze, covers the years 1947-1955.

The coming months bring a clutch of centenaries. Carson McCullers would have been 100 on February 19, the centenary of Jane Bowles comes just three days later. Both women are honoured with comprehensive collected works by the Library of America (here and here respectively). Artist and writer Leonora Carrington died in 2011, just a few years short of what would have been her centenary. That milestone, 6 April, is marked by the publication of Joanna Moorhead’s biography, The Surreal Life of Leonora Carrington, one of a small flood of Carringtonian works. Lively, surreal tableaux abound in The Milk of Dreams, stories which the artist wrote (in Spanish, originally) and illustrated for her own children, while the decidedly adult Down Below, also issued by NYRB, fearlessly documents Carrington’s time in a mental institution. Meanwhile, the Dorothy Project has a Complete Stories, while finally Manchester University Press provides scholarly context around Carrington’s words and images in Leonora Carrington and the international avant-garde. 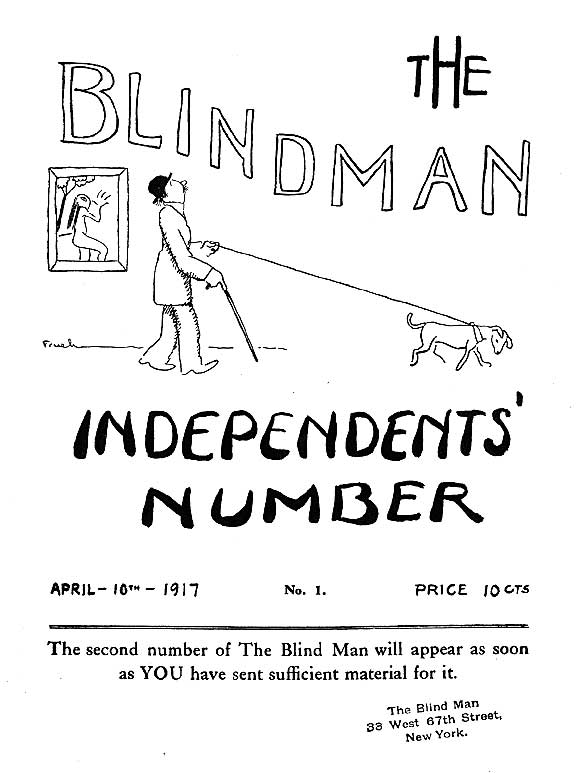 The first issue of The Blind Man, a zine-like publication edited by Marcel Duchamp, Henri-Pierre Roché and Beatrice Wood, appeared in New York on 10 April 1917. Its significance in avant-garde lore lies in fantastical disproportion to its extent and duration (little more than two dozen pages across just two issues). Contributors included Mina Loy, Francis Picabia, Erik Satie, Gabrielle Buffet and Carl Van Vechten. You can discover all this for yourself later in the year when Ugly Duckling Presse reprints facsimiles of The Blind Man in a centennial edition along with extensive commentary. The second edition of the journal included a photograph of Fountain, Duchamp’s provocative sanitaryware totem banned from display at the Independents’ Exhibition, which also launched in New York on 10 April 1917. Bonus doomed poet fact: it was at the show’s opening party that Mina Loy first caught sight of Arthur Cravan.

There’s much more poetic doom to come in Deaths of the Poets, by Paul Farley and Michael Symmons Roberts, which I await avidly. “In this book, two contemporary poets undertake a series of journeys – across Britain, America and Europe – to the death places of poets of the past, in part as pilgrims, honouring inspirational writers, but also as investigators, interrogating the myth.”

One book I could recommend year after year is Virginia Nicholson’s Among the Bohemians (2003). In one episode Nicholson describes “a scene straight out of Puccini” as the consort of Britain’s foremost bohemian faced her fate in the late winter of 1907. “Augustus John’s young wife, Ida, lay dying of puerperal fever in the boulevard Arago after the birth of her fifth child, Henry. Augustus’s mistress Dorelia was looking after the other children not far away. There was a tremendous thunderstorm as Augustus sat by Ida’s bedside. As day broke over the rain-washed city of Paris, Ida was sufficiently conscious to drink a toast with her husband – ‘to Love!’ The end was close now…” Ida John was just 30 when she died, and Augustus comes off poorly in any account of her pitifully short life. Now, in The Good Bohemian, we hear from the woman herself in letters which describe her marriage to the magnetic Augustus which so shocked her family, and the pair’s further break with convention as they accepted Dorelia McNeill into their ménage. The selection is edited by Ida (and Augustus’s) granddaughter Rebecca John and Augustus John biographer Michael Holroyd.

The Last Bell offers tales “both literally and metaphorically Bohemian”; the same description could apply to its author, Johannes Urzidil (1896-1970). Urzidil was part of an early 20th century circle of mostly Jewish German-speaking writers in Prague whose more prominent members included Franz Kafka, Max Brod and Franz Werfel. This edition, translated by David Burnett and issued by Pushkin Press, is (I believe) the first English-language appearance of Urzidil’s fiction. That he got to write these absurd tales at all is due in no small part to the writer Bryher; it was thanks to her principled largesse that Urzidil managed to escape Czechoslovakia in 1939.

Twisted Spoon Press is not only based in Prague, it is also a tireless champion of undervalued works by Czech and other Central European authors – beautifully presented, masterfully translated and appended with thoughtful commentary. Although it’s been out for a while I can recommend A Gothic Soul (first issued in 1900) by Jiří Karásek, an intensely atmospheric, authentically nihilistic work whose protagonist could be Monsieur de Bougrelon‘s maudlin cousin. And now, following last year’s widely praised poetry volume The Absolute Gravedigger, by Vítězslav Nezval, comes A Prague Flaneur by the same author, originally published in 1938. And from around the same period comes Dreamverse, a forthcoming collection of hypnagogic text (translated by Jed Slast) and images by Jindřich Štyrský.

Speaking of dreams, and Monsieur de Bougrelon, we eagerly return to Spurl, who last year introduced Jean Lorrain’s aged dandy to English-language readers. Now comes a translation (by Richard Sieburth) of Nights as Day, Days as Night in which author Michel Leiris, “disrupts the line between being asleep and awake, between being and non-being”. Like Anaïs Nin, Michel Leiris seems to be having a capital ‘m’ Moment. Other forthcoming works by the French Surrealist – who was a subject of Francis Bacon paintings and an object of André Breton’s ire – include Fibrils, the third instalment of his vast autobiographical project, and Phantom Africa issued by Kolkata-based Seagull Books.

The name of German writer Oscar A. H. Schmitz (1873-1931) arouses little recognition among present-day readers in his homeland and almost none beyond. His eclectic bibliography extends from travel writing to lifestyle advice, polemics to macabre fiction. In 1897 he spent several months in Paris, where he became a regular at the salon of writer Rachilde, greedily inhaling the Decadent literature for which it was a hub. For Hashish, his first book of prose, Schmitz huffed deeply on Huysmans and like-minded writers while squinting ahead to the macabre literature to come in the early 20th century. First published in 1902, Hashish is now available in English thanks to translator W. C. Bamberger and publisher Wakefield. It comes as a series of electrifyingly morbid tales spun by habitués of a hashish den, moderated by mysterious dandy Count Alta-Carrara. The tales roam from a crumbling Venetian palazzo – where sex is sister to death – to pre-revolutionary Paris, where jaded aristocrats goad the peasantry to barbarous orgies. Something for everyone! Also among Wakefield’s bounty of forthcoming titles is Francis Ponge’s The Table, which joins the publisher’s previous translation of Georges Perec’s An Attempt at Exhausting a Place in Paris in the canon of obsessional focus.

Following their rediscovery of Theodore Wratislaw, Rivendale Press turn their attention to an equally fascinating, equally obscure figure of the 1890s in Michael Seeney’s More Adey: Oscar Wilde’s Forgotten Friend. I’ve long been eager to find out more about More, a mysterious link to the lone novels issued by Oscar Wilde and Aubrey Beardsley, respectively. Lesser-known sides of a better-known literary figure comes in The Many Facades of Edith Sitwell, edited by Allan Pero – a welcome visitor to these pages – and Gyllian Phillips.

Things take a queer turn with our next trio of books. “Queer” is a word I regard more as a convenient umbrella term for all manner of sexual variance than a label I might, say, apply to myself. But all three of these titles have the effect of returning us to times, places, or cultural products familiar to us in various degrees and uncovering what has been too readily obscured – a valuable and important endeavour. 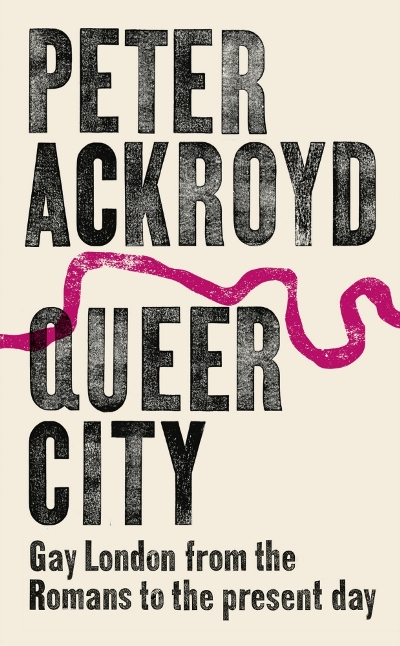 In Jews Queers Germans, Martin Duberman takes us to Wilhelmine Germany, offering real-life characters such as Harry Graf Kessler, Magnus Hirschfeld and Kaiser Wilhelm II himself in a fictional treatment of the gay scandals that so damaged the standing of the imperial order. Meanwhile, Peter Ackroyd noses around the molly houses and fingersmiths of London’s millennia of gay and lesbian history in Queer City. Few writers have written about anywhere with the passion and erudition with which Peter Ackroyd has chronicled the British capital, so this is likely to become a standard text of the city’s sexual dissenters. Also forthcoming is a catalogue to accompany Tate Britain’s exhibition Queer British Art 1861-1967, with artists ranging from Simeon Solomon to David Hockney.

As we now find ourselves in the coffee table section, I reluctantly draw your attention to the catalogue for another forthcoming London exhibition, Behind this Mask Another Mask. Reluctantly, because yet again Claude Cahun, an artist of breathtaking originality and searing self-sufficiency, is being presented to audiences through the intercession of another artist. And it’s not her frequently uncredited partner and step-sister Marcel Moore in this case, but contemporary artist Gillian Wearing. The show at the National Portrait Gallery (just around the corner from the site of what may be Cahun’s best-known yet least-credited work) follows the 2015 Whitechapel exhibition where Cahun was chaperoned by Sarah Pucill in a lineage that stretches all the way back to 1994, when the ICA introduced London to Cahun alongside Tacita Dean and other artists. For a one-volume introduction to Cahun and Moore I can recommend Don’t Kiss Me (2006), the extensively annotated catalogue of the Jersey Heritage Trust’s collection.

At the halfway point of the year, New York’s Guggenheim will be presenting Mystical Symbolism, plus accompanying catalogue, which surveys the Salon de la Rose+Croix exhibitions held in Paris between 1892 and 1897 which reintroduced Roscicrucian thinking and other metaphysical strains to Belle Époque Paris. Artists included Jean Delville, Fernand Khnopff and Jan Toorop, and the prime mover was the “sandwich man of the beyond”, Joséphin Péladan.

And finally a few interesting-sounding cultural history titles in brief: Lela F. Kerley’s Uncovering Paris: Scandals and Nude Spectacles in the Belle Époque, overlapping in period and subject matter with Kathryn Hughes’s Victorians Undone: Tales of the Flesh in the Age of Decorum, a “groundbreaking account of what it was like to live in a Victorian body”. Also: Undead Uprising: Haiti, Horror and the Zombie Complex, a “mythical life of Haiti” by John Cussans, out through Strange Attractor.

Anyway, those are some of the titles that will be liberating the doubloons from my doublets this year. I hope you find something to your liking too.