It’s been quite a January round Flowers’ way, so this selection of the year’s forthcoming titles of interest is a little later than hoped. But there’s still eleven months left in this thing. Please work through the required reading list below; there will be a comprehension test at the end of the year.

Actually looking down the list, there appears to be an even more marked Mitteleuropa tendency than usual, but hey – it’s where I hang out. 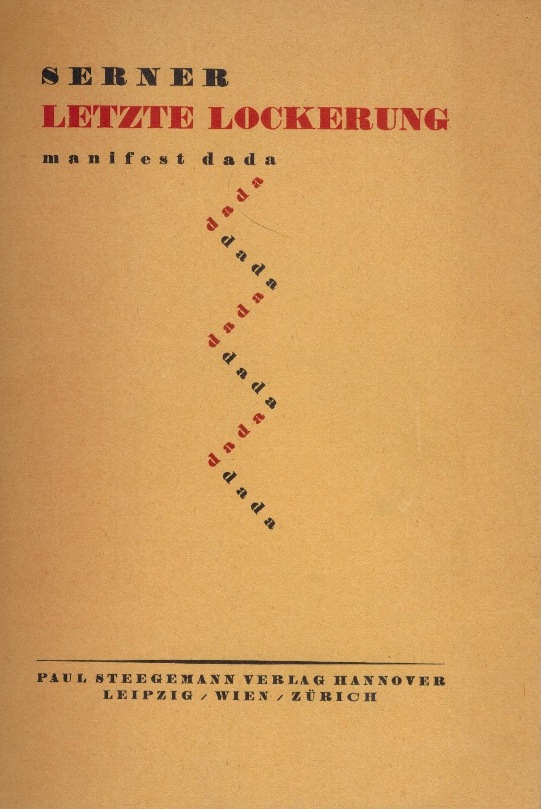 We open in Zurich, where around this time a hundred years ago the word “Dada” would become known to…well, almost no-one, at first. But it was indeed in 1916 that the term first appeared, the Cabaret Voltaire (the venue, then the journal) was launched and Richard Huelsenbeck, Hugo Ball and Tristan Tzara all produced manifestos – or manifesto-adjacent documents – for the young movement. Probably the most obscure figure to have a stab at defining Dada in print was Bohemian-Jewish writer Walter Serner. He wrote his Last Loosening: A Dada Manifesto around the end of the First World War, although it wasn’t published until 1920. It will soon be accessible to the English-speaking reader thanks to translator Mark Kanak and Prague-based publisher Twisted Spoon, which specialises in English editions of Central and Eastern European writings. Switzerland was just one stop in Serner’s trans-European odyssey; the term “rootless cosmopolitan”, Stalin’s disdainful code-word for “Jew”, actually fits Serner well. “Slightly revised later as Serner became disgusted with Dada, it forms the first part of this volume, its philosophical foundation. A playful “moral codex” to subvert the illusions and stereotypes underpinning society’s views on morality and decency, it attacks the contradictions between appearance and reality…” For the rest of his life Serner concentrated primarily on crime fiction; following internment in Theresienstadt, he and his wife were murdered near Riga in 1942. 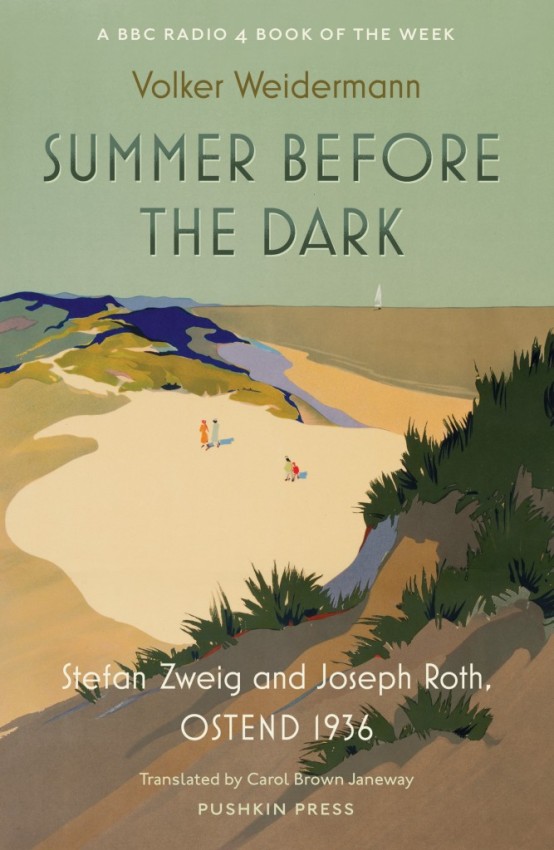 More doomed interwar relations…Pushkin Press follow up their extensive range of Stefan Zweig translations with a book which pairs him with Joseph Roth in Summer Before the Dark by German writer Volker Weidermann (translated by Carol Brown Janeway). It finds the two Austrian-Jewish authors in the incongruous setting of the Flemish seaside in summer 1936, because apparently we can’t get enough of a doomed idyll (tellingly, German Amazon pairs Weidermann’s book with 1913, another work of pre-cataclysmic cultural history). 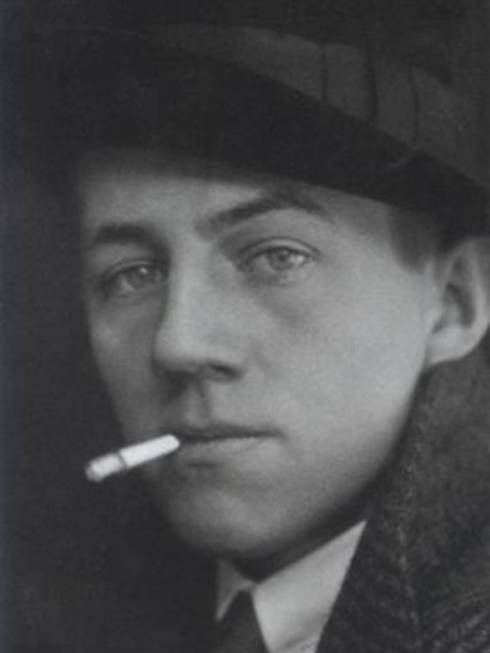 And yet another translation from the German, this one originally penned by Franz Hessel who was interesting for more reasons than I can list here. Just quickly, then: he was part of the bohemian tumult of early 20th century Munich, with no less than Fanny zu Reventlow as a roomie (they remembered the experience in tit-for-tat romans à clef), he was a good friend of Walter Benjamin, and in Paris he embarked on a three-way entanglement with a Frenchman and a woman destined to be his wife, an arrangement which endured even after the two men found themselves on opposing sides in the First World War. And if that sounds like the plot to Jules et Jim, that’s because it is, that roman à clef’s author being said Frenchman, Henri-Pierre Roché. A wry, sensitive, occasionally mournful novelist, Hessel was also a wry, sensitive, occasionally mournful observer of his surroundings, producing the definitive flaneur’s account of Weimar Berlin, Spazieren in Berlin (although when it came to the theory of flanerie he left the heavy lifting to Benjamin). Now, an indecent time since its publication in 1929, it is finally to be made available in English as Walking in Berlin, translated by Amanda DeMarco, who also publishes brilliant, small titles under the name Readux Books, whose every instalment will bountifully reward your modest outlay of time and money. 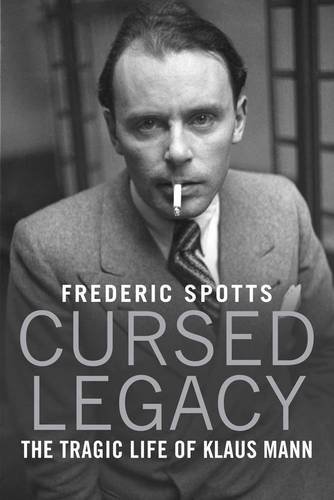 Like Hessel – and Stefan Zweig and Joseph Roth for that matter – Klaus Mann numbers among the prestigious list of exiles who passed through the French internment camp, Sanary-sur-Mer. While he survived the war (unlike the other three), it wasn’t exactly an easy ride as the title of the forthcoming Cursed Legacy: The Tragic Life of Klaus Mann makes clear. Frederic Spotts’s book is, amazingly, the first biography of the Mephisto author to appear in English, although it follows the subject’s own account, The Turning Point, and the excellent In the Shadow of the Magic Mountain (2008), which examined Klaus and his sister Erika (find out more about the siblings’ manifold connections here). 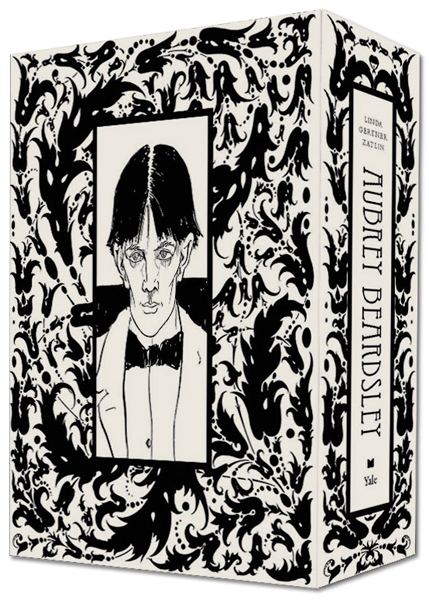 If you’re anything like me, you’ll greet the announcement of a forthcoming catalogue raisonné of Aubrey Beardsley‘s work much as you would news of a Klaus Mann biography in English: wait, there isn’t one already? It seems not. Linda Gertner Zatlin, one of the world’s foremost Beardsley experts, is responsible for the two-volume edition which will be landing with a resounding, expensive *thud* in March.

While we’re feeling arch, there is talk of a brand new biography of Ronald Firbank this year. I’m coming up cold on that search but in the meantime there’s a reissue of the essential Prancing Novelist, a study of Firbank originally published in 1973. Read this and I think you’ll agree author Brigid Brophy sounds like she would have been a right laugh over a boozy lunch (sadly I sense the same could not be said of fellow Firbankian Miriam J. Benkovitz, no matter how jaunty her cats-eye twinkle). 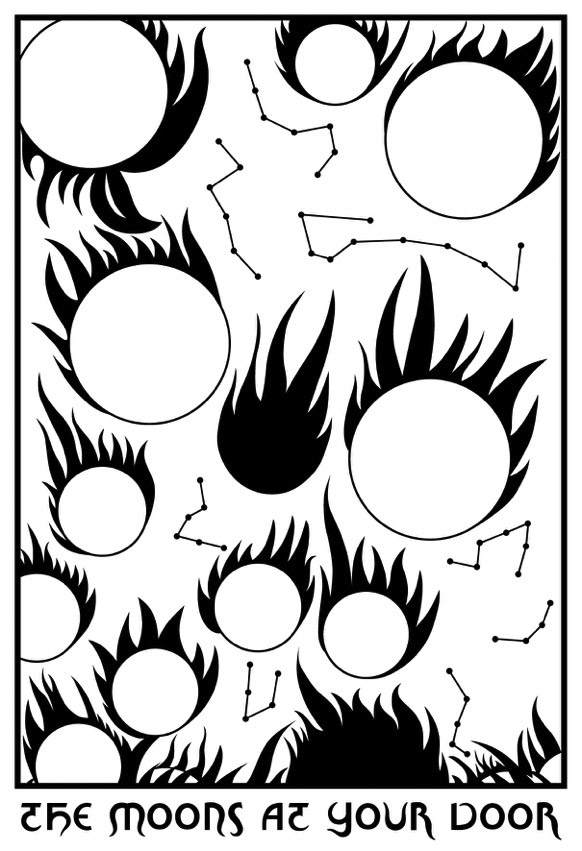 Meanwhile, David Tibet is presenting at least a taste of Count Eric Stenbock this year in his hand-picked anthology of strange fiction entitled The Moons at Your Door. The immortal count is joined by Arthur Machen, Elizabeth Gaskell, Thomas Ligotti and many others in a selection which stalks time and space in its search for the dark rush of the macabre:

I fell in Love with The Moons whom I had heard and seen at my door when I was a young boy in Malaysia. I have brought together, in this work, many of the short stories and texts that have made me what I am and what I will be, and it gives an insight into my Spheres for those who wish to read what formed me. I have never tired of these works, which still move me profoundly, and I will never will. 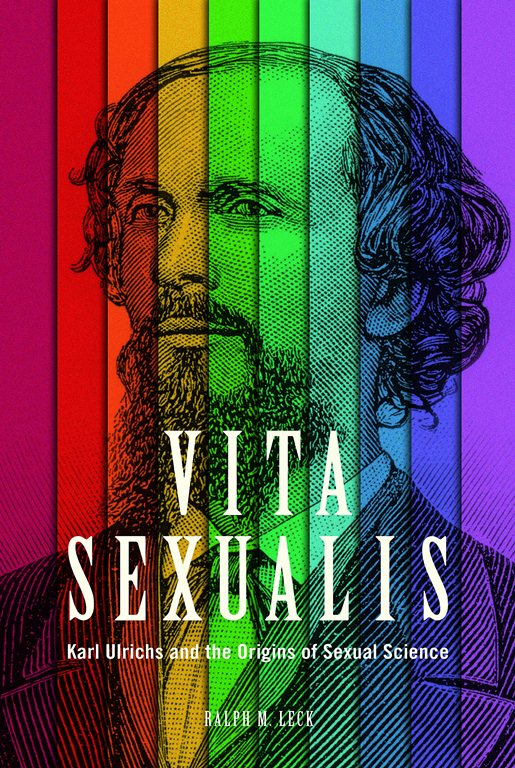 Last year a major exhibition at Berlin’s German History Museum explored same-sex attraction through the centuries. Among the exhibits was an 1868 letter by Hungarian writer Karl-Maria Kertbeny in which the word “homosexual” appears for the first time in history. The recipient of that letter, Karl Heinrich Ulrichs, is now the subject of an English-language biography. If you read Robert Beachy’s 2014 Gay Berlin, you may well remember that Ulrichs was the very first gay activist. Ever. Were this not immediately apparent, the publishers have thoughtfully adorned the cover of Ralph M. Leck’s book with rainbow stripes. 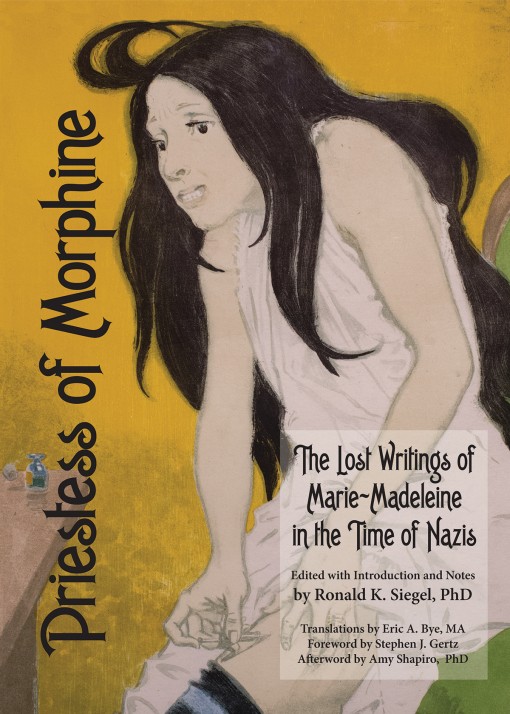 Another exotic apparition of imperial Germany, an era whose oddities are very close to my heart, was Marie-Madeleine. It is a name unlikely to mean much to you, but then Anita Berber was all but unknown in the English-speaking world until Feral House issued Mel Gordon’s biography around a decade ago. The same publisher now presents Priestess of Morphine: The Lost Writings of Marie-Madeleine in the Time of the Nazis, translated by Eric A. Bye, although the prominence of the word “Nazi” in the title is, I suspect, in deference to Feral House’s brand of investigative paranoia (their backlist roams through NASA, UFOs, JFK, heavy metal, chemtrails, drug culture, the occult and secret societies). It’s an unfortunate misdirection, as Marie-Madeleine’s printed output was in fact almost entirely confined to the Wilhelmine era, and given its outré themes of sex, drugs and oom pa-pa, this is precisely what makes it so interesting. One hundred years ago, for instance, while the German imperial order was approaching its fiery end, Baroness Marie Madeleine von Puttkamer (as she was more formally known) was issuing the novella collection Der süsse Rausch – “Sweet Intoxication” – which huffed, humped, toked, slurped and licked its way through a wide assortment of pharmacological and sensual diversions. It was the kind of territory, in short, previously staked out by Decadent supreme Jean Lorrain. Now, use of the word “decadent” in present-day publishing usually presages either a) chocolate cake recipes, or b)  self-published rants about the collapse of Western civilization. But here’s the real thing, a sublime, perverse, uncut hit of 1890s corruption and splendour in the form of Lorrain’s Nightmares of an Ether-Drinker (in Brian Stableford’s translation). 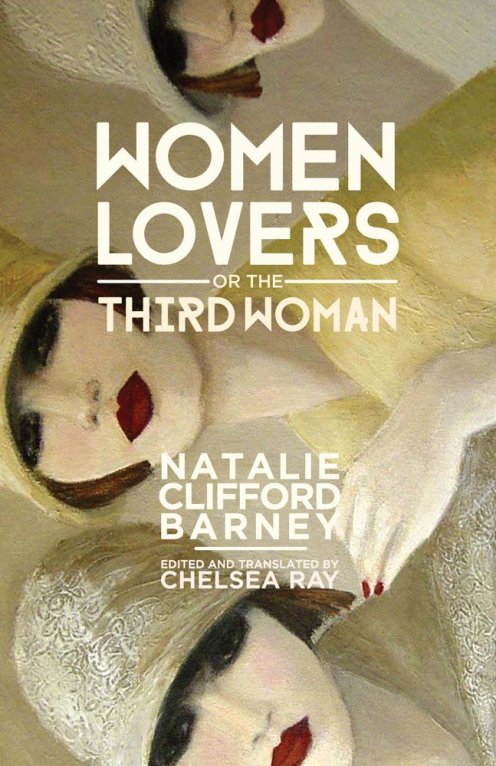 Connecting Jean Lorrain to anyone else in Belle Époque Paris is not the most difficult parlour game with which to hasten an inclement Sunday. With our next literary luminary, Natalie Barney, Lorrain shared the distinction of appearing, lightly camouflaged, in Liane de Pougy’s Idylle saphique, a – yes – roman à clef. In Women Lovers, or The Third Woman, Natalie Barney turns the tables and casts her own thin veil of fiction over her lover de Pougy. The recently rediscovered work is published by the University of Wisconsin Press – also responsible for Cassandra Langer’s study of Romaine Brooks which we looked at recently – with translation by Chelsea Ray, and an introduction by Melanie C. Hawthorne, whose 2013 biography of cross-dressing Gisèle d’Estoc you may recall. 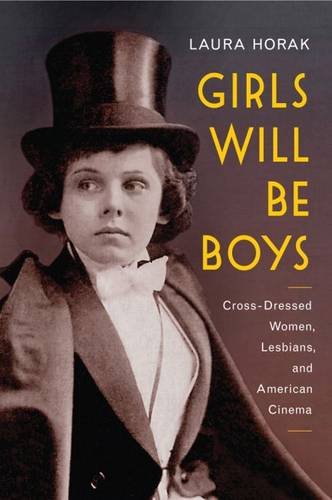 Three more hits of Strange Flowers-flavoured cultural history come with the silver screen sapphism of Laura Norak’s Girls Will Be Boys: Cross-Dressed Women, Lesbians, and American Cinema, released today, the nocturnal wanderings of Joachim Schlör’s Nights in the Big City: Paris, Berlin and London 1840-1930 and The Glamour of Strangeness. From the title alone I guessed this would be my kind of book. Sho’nuff:

Focusing on six principal subjects, Jamie James locates “a lost national school” of artists who left their homes for the unknown. There is Walter Spies, the devastatingly handsome German painter who remade his life in Bali; Raden Saleh, the Javanese painter who found fame in Europe; Isabelle Eberhardt, a Russian-Swiss writer who roamed the Sahara dressed as an Arab man; the American experimental filmmaker Maya Deren, who went to Haiti and became a committed follower of voodoo. From France, Paul Gauguin left for Tahiti; and Victor Segalen, a naval doctor, poet, and novelist, immersed himself in classical Chinese civilization in imperial Peking. 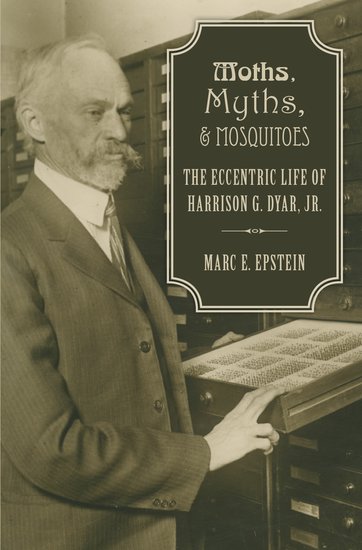 The subject of our last work was previously unknown to me, but he seems to dwell at the always compelling intersection of academia and dementia. Marc Epstein’s Moths, Myths, and Mosquitoes: The Eccentric Life of Harrison Dyar appears in April, and looks highly promising:

On September 26, 1924, the ground collapsed beneath a truck in a back alley in Washington, D.C., revealing a mysterious underground labyrinth. In spite of wild speculations, the tunnel was not the work of German spies, but rather an aging, eccentric Smithsonian scientist named Harrison Gray Dyar, Jr. While Dyar’s covert tunneling habits may seem far-fetched, they were merely one of many oddities in Dyar’s unbelievable life.

Oh, and if you’ve been keeping a tally you will know we’re one shy of the promised 16 books, so I’ll merely say that there should be at least one book with your blogger’s name on it by the end of the year…and leave it at that.