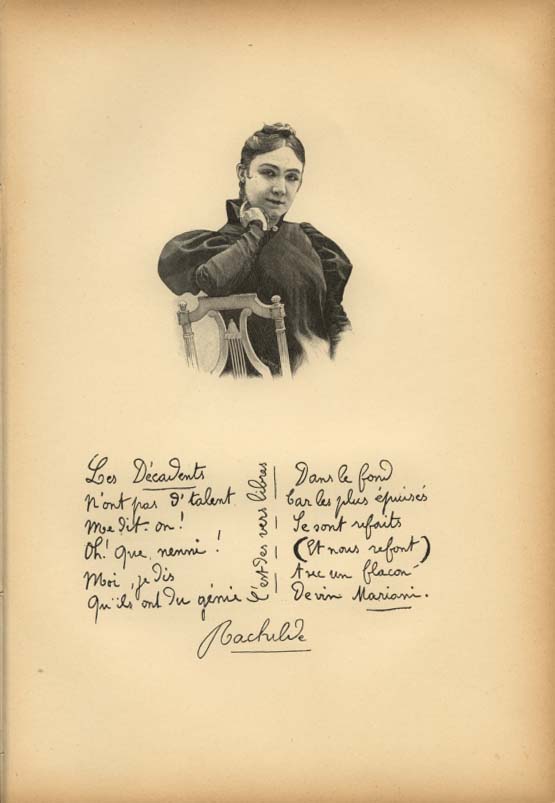 I don’t use the word “amazing” a lot.

OK, that’s a lie. I use it all the time. I used it two hours ago to describe a particularly eye-catching cloud I saw on Tempelhofer Feld. But from now on my gold standard of “amazing” will be Figures Contemporaines.

Which is what exactly? Well last month a reader got in touch, enquiring about an image of Rachilde (reproduced above) which I used in an old post about the great French Decadent writer, who incidentally died on this day in 1953. I couldn’t recall where I had found it, but further enquiries revealed the original source, and it is – indeed – amazing.

First, let’s examine the handwritten text beneath the portrait:

A bottle of what now? “Vin Mariani”, it turns out, was a hugely popular over-the-counter tonic whose popularity was not unrelated to the fact that it was laced with cocaine. And Figures Contemporaines was a compendium of testimonials that the French company behind Vin Mariani published every year or so throughout the Belle Époque and beyond. In fact they evidently made many people’s époque significantly beller if their fulsome first person avowals are to be believed.

Perhaps we shouldn’t be surprised that someone like Rachilde, whose writing addressed gender reversal, sado-masochism and other outré piquanteries, would be induced to shill for what was essentially a blow spritzer. But Vin Mariani also found favour with such upstanding literati as Henrik Ibsen, Émile Zola and Alexandre Dumas. And as the series wore on the endorsements poured in from the highest circles of power: President McKinley, the Kings of Sweden, Spain and Cambodia, a Shah of Persia and not one but two popes. And if any of Queen Elisabeth of Romania’s contemporaries wondered how she combined her royal duties with a prolific literary career, writing numerous novels in different languages under the name Carmen Sylva, she was happy to (effectively) tell the world: I’M BUZZED OUT OF MY FREAKIN’ BRAINBOX.

Each subject in Figures Contemporaines was allotted three pages, two of which detailed their achievements, the third featuring a portrait and a testimonial in the subject’s own hand. And that went for the lowliest bohemian or the Supreme Pontiff himself – here the underworld really did meet the elite, and it was quite the party. This was not simply a case of luminary x accepting cash in return for a feigned fondness for product y (and presumably crowned heads did not ordinarily take money for such things), but an extremely modern, symbiotic relationship between brand and celebrity.

Doctors lined up in their dozens to salute the health-giving properties of Vin Mariani while the company’s own marketing text spoke of a wondrous elixir which miraculously dissolved the maladies of the condition humaine. It was particularly recommended for “women exhausted by maternity”, as well as athletes, who apparently found it far better for “developing vigour and maintaining endurance” than any amount of training (no shit). Of course it wasn’t the only product of its age which brought the “restorative” effects of the coca leaf to the consumer, and we already know of cocaine’s effect on figures as diverse as Sigmund Freud and Queen Victoria. But never has a product been so resoundingly endorsed by such a distinguished set of personalities.

The selection below is a pot pourri of fin-de-siècle creative professionals, as well as celebrity gynaecologist and Sargent subject Samuel Pozzi, who probed some of the most prestigious lady gardens in Paris. Graphic artists, including Odilon Redon, caricaturist Sem and Raymond Roussel’s favoured illustrator Henri-Achille Zo, often embellished their entries with original images. Alphonse Mucha, for instance, provides a graphic accompaniment to his claim that “even the mummies stand up and walk when they drink Vin Mariani!”

The writers whose pens were quickened by Vin Mariani include our old favourite Robert de Montesquiou, cross-dressing mystic Joséphin Péladan, lesbohemian poet Lucie Delarue-Mardrus, the scandalous Octave Mirbeau and Parnassian eminence Catulle Mendès (as well as his one-time lover, composer Augusta Holmès). And they could hardly omit the man whose life was essentially a cocktail of drugs, alcohol and notoriety: take a bow Jean Lorrain.

Those are the ones who caught my eye, anyway; devotees of obscure Belle Époque notables whose curiosity has been piqued are directed to Europeana which hosts most editions of Figures Contemporaines. 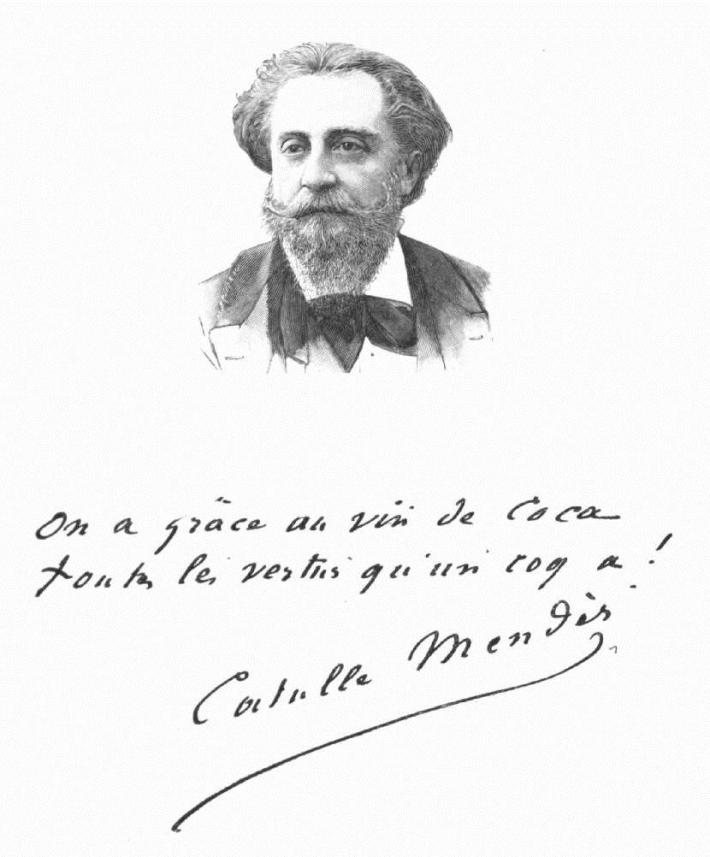 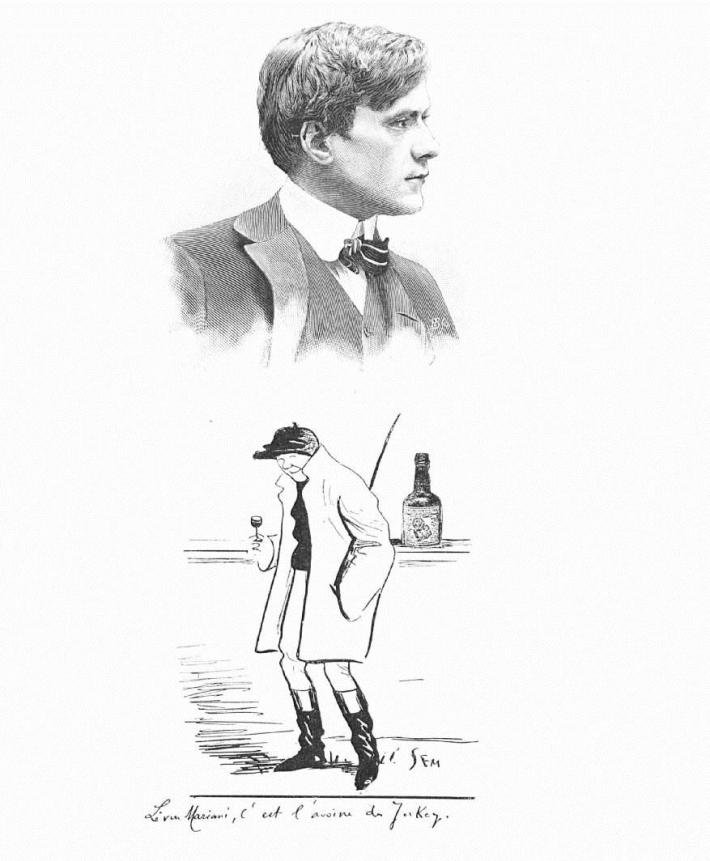 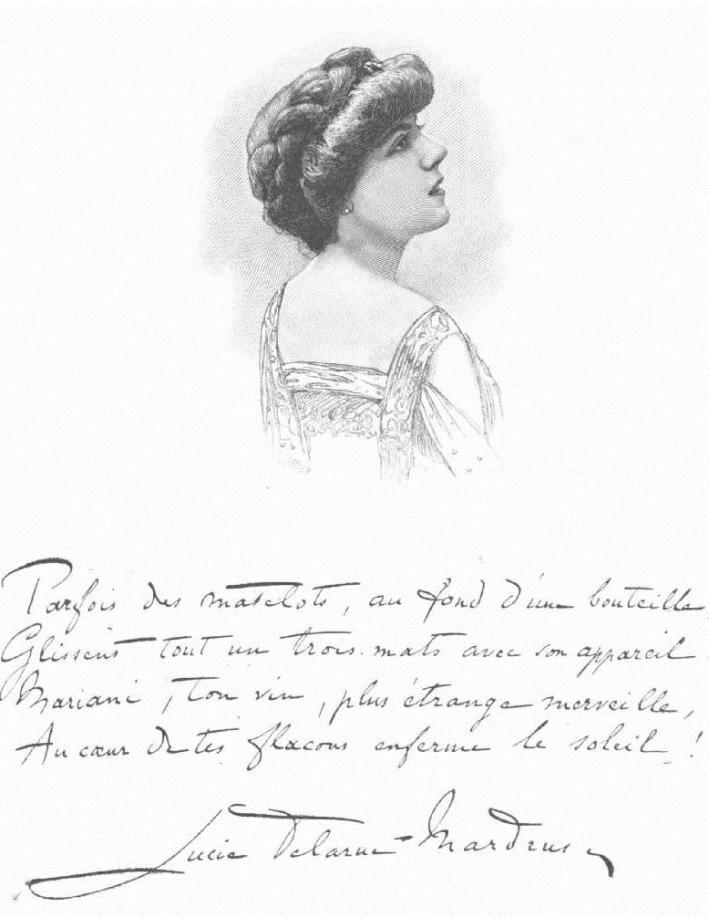 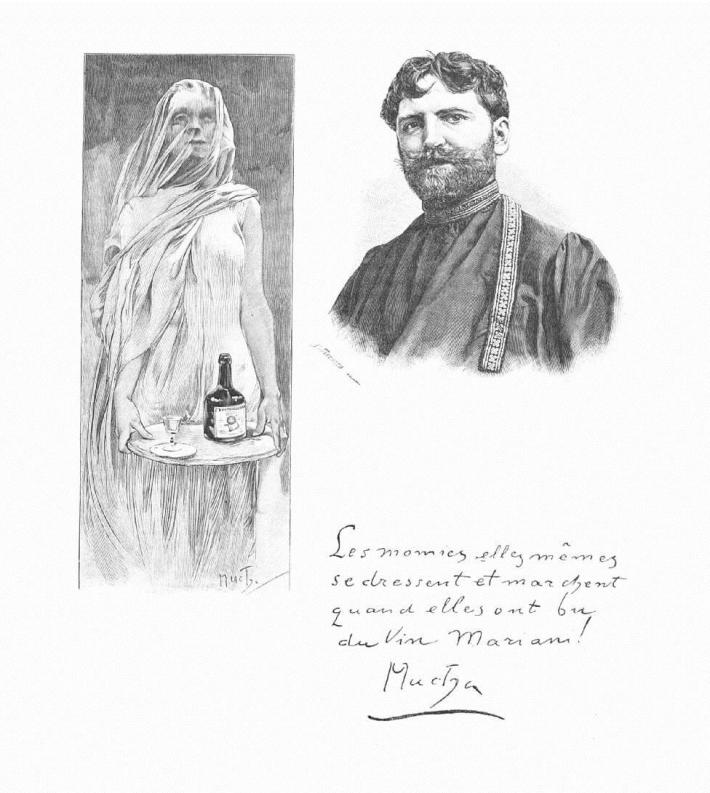