By one of those coincidences that make you wonder if God is not, in fact, a ‘pataphysician, the Berlinale film festival this year presents two works inspired by the German-language writings of two different women who died following bicycle accidents in Switzerland. The films in question are Je suis Annemarie Schwarzenbach – of which more on the weekend – and Der Geldkomplex (“The Money Complex”), loosely based on the 1916 epistolary novel of the same name by Fanny (Franziska) zu Reventlow.

While retaining the original title, Der Geldkomplex in fact comes to us from Spain, and is entirely set on a finca in the country’s rural south. It is the first feature by director Juan Rodrigáñez, who appears briefly at the beginning of the film, being primed for his visit to Dusseldorf where he is to shake down a mysterious Herr Müller to the tune of three million. But three million what? Deutschmarks? Euros? The omission is not careless but entirely deliberate, placing the ensuing events in a suspended timeframe. There are few technological clues – a clunky old portable CD player with a faulty tuner catching a snippet of Whitney Houston from the air suggests the setting could be any time between the early 1990s and the present day.

And little of what transpires constitutes action in the conventional sense. The estate’s owner, Rafael, plays host to a group of friends, his son brings home a German girlfriend who appears to be a concert pianist. She doesn’t really fit in, and after a bit of four-handed piano with another man, she leaves in the dead of night. Everything else – the characters’ backgrounds, motivations, sometimes even their names – remains largely undefined. The cast drifts in fragmented constellations, their obligations to the outside world only hinted at.

What this film isn’t, thankfully, is the kind of cinematic pastorale which comes with wafty pastel linens, flirtatious glances beneath straw brims and lingering close-ups of lavishly laid tables (is there anything more tediously middle class than films about food?). In fact a long, laborious discussion about the best way to introduce rice into a paella over a shot of said dish bubbling on an outdoor cooker seems to mock exactly this type of film. 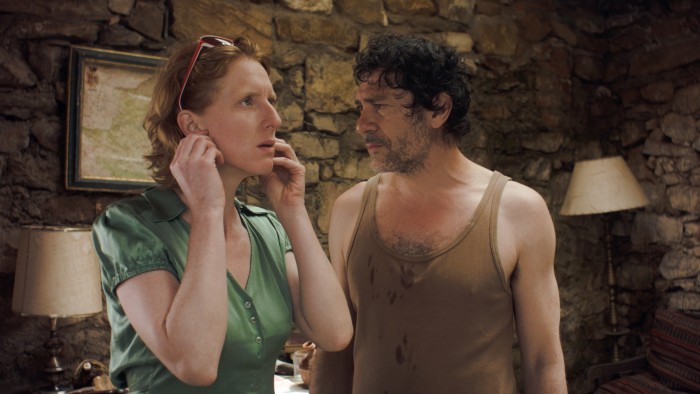 Der Geldkomplex doesn’t glide between its set pieces, rather it slips and shifts. And when it lands the camera is never quite where you would expect. The framing is disorienting, the close-ups extreme, the reaction shots we are conditioned to anticipate fail to materialise. One daytime shot is overlaid with the ambient sounds of the next (nocturnal) scene – owls, cicadas. The dialogue is largely improvised and no-one seems in any hurry to further the narrative, such as it is. This is a film with a perpetual post-G&T buzz on. At times it has something of the autistic absurdism of the recent Greek cinema, particularly in the character of Francisca, who is caught in a somnolent, unproductive, vaguely depressive funk. When she finally stirs it comes as a startling gesture of regression. At another point she declares “I’m waiting for money to forgive me,” echoing her namesake’s lifelong, fruitless quest for financial stability.

The director says it was the subtle irony in Reventlow’s novel that he responded to, the humour in its account of work, money, art, life and self and their problematic relations with each other. Reventlow, the “bohemian countess” whose pursuit of total personal autonomy shocked Wilhelmine Germany, drew extensively on her own experiences in her writing. Der Geldkomplex – archly dedicated to the author’s creditors – is no exception, reflecting her sham marriage, the bank collapse which wiped out her remaining funds and her return to accustomed penury (along with a satirical swipe at psychoanalysis). Much of the film relates only tangentially, thematically to Reventlow’s narrative, but at other times with surprising fidelity, including a harebrained scheme to drain a riverbed and mine it for gold which turns out to not be so harebrained after all. The reason that this fairly obscure, century-old text resonates is because the questions it raises have never been satisfactorily resolved: how to reconcile the romanticism of the bohemian life with the reality of a world fuelled by finance; how to clothe, house and feed oneself in a society with which one takes political, social or moral exception.

Not that the film provides a glib answer to these questions any more than the book does. The characters table various solutions (prospecting, Marxism, mooching), but to little effect. They simply press the snooze button, never fully waking and responding to the demands of the material world. But knowing that the alarm will sound again ensures that their slumber remains fitful.

Pedro Almodóvar’s last film imagined Spain as an imperilled aircraft, its crew clueless, its passengers fractious. Though Der Geldomplex is a far more drowsy affair, the subject of the debt crisis is surely hovering somewhere there in the heat haze. In any case, this an intriguing, original debut which would surely reward re-viewing. And if nothing else it has supplied my new favourite euphemism: “four-handed piano”.