The Picture of John Gray 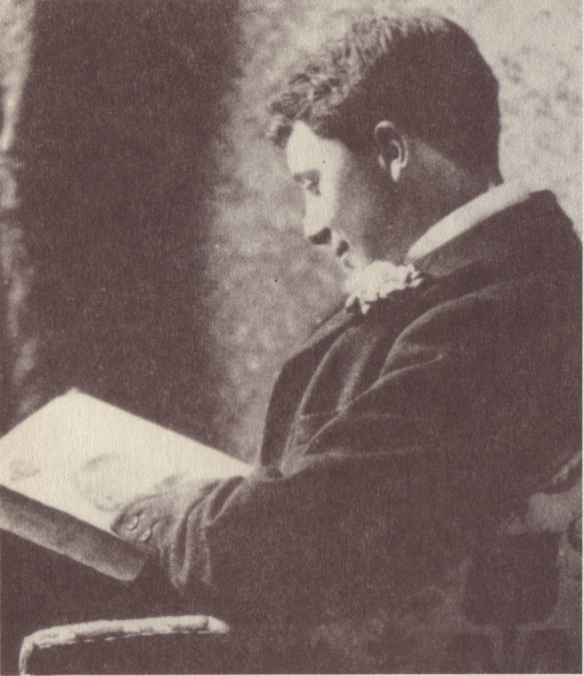 Frederick Rolfe isn’t the only queer Catholic convert getting stage time this month. Starting next Tuesday, London’s Old Red Lion Theatre presents The Picture of John Gray, the tale of an apprentice metal-turner who would leave his mark on one of the greatest late 19th century novels.

John Gray‘s life story is a remarkable example of social mobility, his rise written across a map of London. In the 2011 Strange Flowers guide to London, he is the only figure who appeared in all three parts. Born in the city’s south-east in 1866, he appeared to have little choice but to follow his father into manual labour. However restless ambition and assiduous self-teaching secured him a civil service position, and Gray moved westward to the Inns of Court. Here he came into contact with literary figures of the day, activating his own latent urge to write first inspired by the French Symbolists. The young man’s evident aspirations conspired with his beauty to place him in enviable company, and he soon became a regular at the Chelsea home of late Victorian tastemakers Charles Ricketts and Charles Shannon. At some point in 1889 he came into contact with Oscar Wilde; the exact occasion is unknown. So too the precise nature of their relationship, but through references occluded in deference to the morality of the day, we can be fairly certain that they formed a romantic attachment. It was certainly at Wilde’s side that Gray could be seen at the Café Royal, the uncontested centre of arts and letters in 1890s London.

At the time the elder writer was working on a parable of imperishable beauty, and it was here that Gray’s self-willed trajectory collided with Wilde’s own designs on his handsome companion’s name and aura. Art threatened to consume the life it had imitated, as Jerusha Hull McCormack explains in John Gray: Poet, Dandy, and Priest:

Unfortunately, in Wilde’s The Picture of Dorian Gray, John Gray was offered a ready-made self. The tragedy of Gray’s early manhood is in large part the result of his adoption of this persona. In exploiting the popular notion that he was himself the model for the novel – by, for instance, allowing himself to be called and calling himself “Dorian” – Gray also exploited his relationship with Wilde. For several years, according to the available evidence, Gray played up to the role the public assigned him and, it seems, used it to become accepted into fashionable society. At the same time, he evidently tried to escape the consequences of this identification (which, with the growing indignation over Wilde’s attachment to Douglas, was becoming troublesome) by the threat of legal action and by withdrawal from Wilde’s circle.

Gray had “come out to Rome” in 1890, but his Catholicism was little more than the kind of fashionable affectation undertaken by More Adey, Eric Stenbock, Ronald Firbank, Montague Summers, Lord Alfred Douglas and other gay men of letters. However as Gray escaped London with French poet Marc-André Raffalovich, he appeared to undergo a second, more sincere conversion. The lovers came to an unconventional accommodation with their shared, adoptive faith, moving to Edinburgh where Gray became a parish priest. The two men died in 1934, months apart.