How, asked many creative professionals in the waning 19th century, are we to prepare ourselves for the coming age? After the social turbulence brought about by industrialisation, secularisation and – fitful – democratisation, what values, what ways of living are most apt to the demands of a new century? While the Decadent movement revelled in the perversities of an epoch coming to its close, the more reform-minded contemplated what might replace it.

Few were more preoccupied with this question than German artist Karl Wilhelm Diefenbach. With the full beard, flowing robes and beatific mien of a prophet, he preached pacifism and respect for nature coupled with abstinence from meat, alcohol and tobacco. Turning his back on the city he took a group of like-minded idealists to the Austrian countryside and established the first ever commune in 1885. Conflict arose when some of Diefenbach’s fellow travellers observed that the master was not beholden to the strictures he imposed on his disciples. Money, too, was a perpetual problem. Eventually Diefenbach left it to his followers to spread his views and set off on his own. The date of his new start could not have been more significant: on 31 December, 1899, he established himself on the Italian island of Capri.

Ever since gay German artist August Kopisch rhapsodised about the island and its sapphire blue grotto in the early 19th century, right up to the arrival of mass tourism in the 1950s, Capri was a refuge for artists, writers, musicians and others fleeing the censure of their fellow citizens elsewhere in Europe. Their ways too idiosyncratic, their sexual activities too scandalous for the mainland and the mainstream, they found new lives among the cypresses and lemon groves atop the sheer limestone crags soaring out of the Tyrrhenian Sea. In 1897, for instance, a freshly disincarcerated Oscar Wilde visited the island with Lord Alfred Douglas. Romaine Brooks arrived the same year as Diefenbach, and in 1903 French aristocrat Jacques d’Adelswärd-Fersen began his self-imposed exile. The Marchesa Casati, Claude Debussy, André Gide, Jean Cocteau, Compton Mackenzie, Graham Greene and Norman Douglas would all follow as the 20th century wore on. 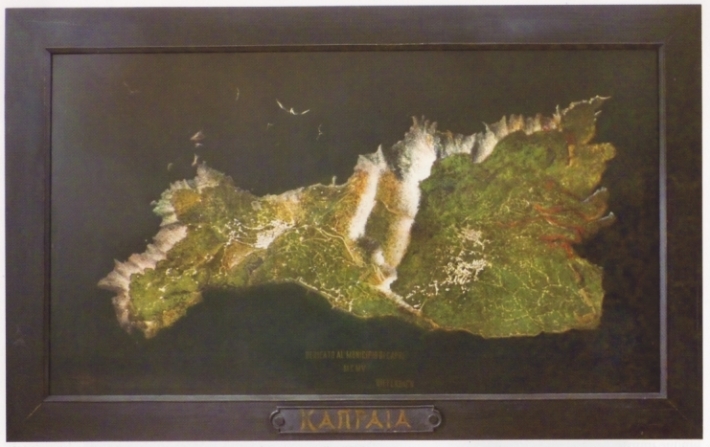 Map of Capri (upside-down) by Diefenbach

Setting out from Trieste, Diefenbach was in fact intending to make his way to India, but on a tour of the Italian coastline he decided instead on Capri. As the sun rose on the 20th century it seemed that he had found a home at last. His appearance may have been as unconventional as his relationships (he arrived with a mistress whom he later married, but soon switched his affections to her sister – among other women) but Diefenbach was met with little more than benign curiosity on the island. 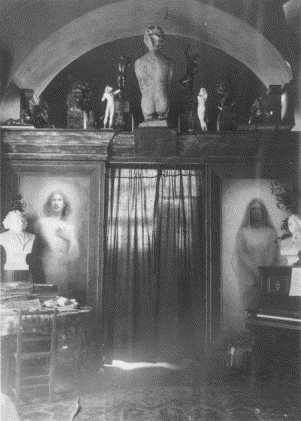 Inside the Casa Grande

Diefenbach hoped to turn his dire financial conditions around by selling his work to wealthy expatriates and visitors to the island. In 1906 he moved into the Casa Grande in the town of Capri. In a highly prominent position adjacent to the funicular landing platform, it was both his home and his studio and – from 1907 – an exhibition space which was listed by Baedeker as one of the island’s chief attractions (two stars). The exterior was decorated with figures from Diefenbach’s huge frieze Per aspera ad astra, in which silhouetted children and animals gambol toward a utopian future.

But business was hardly brisk. Wealthy industrialist Friedrich Alfred Krupp looked but didn’t buy (and shortly afterward committed suicide after he was outed by a German newspaper). While Rainer Maria Rilke mentioned Diefenbach in passing as an eccentric figure on the island, the artist himself complained bitterly that “98 out of 100 Germans staying on Capri pass by the works of a German artist living and working here without even glancing at it.”

Nonetheless, Diefenbach’s Capri period was one of the most fruitful of his whole career. He took inspiration from the sublime landscapes and sea views to produce some of his most powerful canvases, while also turning inward for an affecting series of self-portraits which seemed to draw on the burnished melancholy of Rembrandt’s late works (but the less said about his ham-fisted pastiche of Arnold Böcklin’s Toteninsel the better).

Diefenbach at the entrance to the Casa Grande

However not even the healing light and colour of Capri could work their miracles indefinitely. The artist had been prone to illness since childhood, and it was partly the search for relief which led him to explore alternative lifestyles. That search ended one hundred years ago today when Karl Wilhelm Diefenbach died in the Casa Grande.

Many of the works Diefenbach produced in his last years were donated to the Italian state, and can be seen in the vaulted refectory of the nearby Certosa di San Giacomo. But the Casa Grande itself – once home to a man who spurned materialism and mocked bourgeois fashions – is now a Prada boutique.