Around here, Dress-down Friday is usually dedicated to individuals of outstandingly idiosyncratic style, so this entry is a little off-beam. At first glance these images, which all date from 1913, have much in common with other fashion plates of the time, with their fanciful neo-Rococo imagery viewed through an Art Nouveau filter. But beyond the modish fête galante style you may notice the artist’s focus isn’t always on the clothes, especially in the black & white drawings.

It is about now that I must confess that part of my motivation in posting these images (apart from their obvious appeal and the insight they offer into the tastes of 1913) is to introduce the extraordinary story of Gerda and her transsexual husband Einar. I couldn’t improve upon its telling by the late, lamented Coilhouse, so if you want to know how two people can live in a menage à trois, click and read on. Oh, and there you can see examples of Gerda’s erotica as well (may be NSFW, depending on where you W). 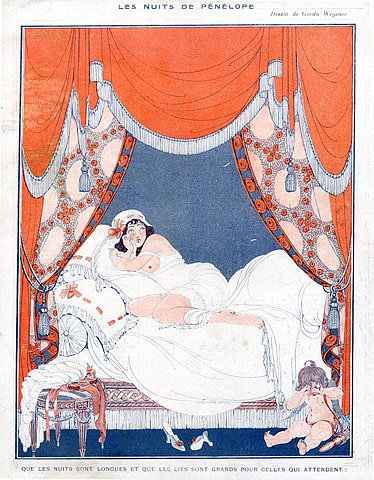