The grown-up women wore long, pleated skirts. What did they have under them? Ravens, snakes, mice? These long skirts represented a vast gulf between myself and adults.

So declared Berlin-born dancer/actress/phenomenon Valeska Gert in her 1968 autobiography, recalling her early childhood in the outgoing 19th century. In contrast to the starched representatives of opaque adulthood around her, Gert preferred shrill colours and expressive liberty. One childhood vignette finds her dancing in front of a large mirror in a red chiffon dress, one of the few times her audacious aesthetic met with a truly appreciative audience. Her signature mask-like makeup of white powder and glaring red lips was fixed early on, as was her compulsion to transgress. Elsewhere in her autobiography Gert recalls a geography class where she wriggled out of her skirts and sat in her underwear waiting to be called up to the blackboard. 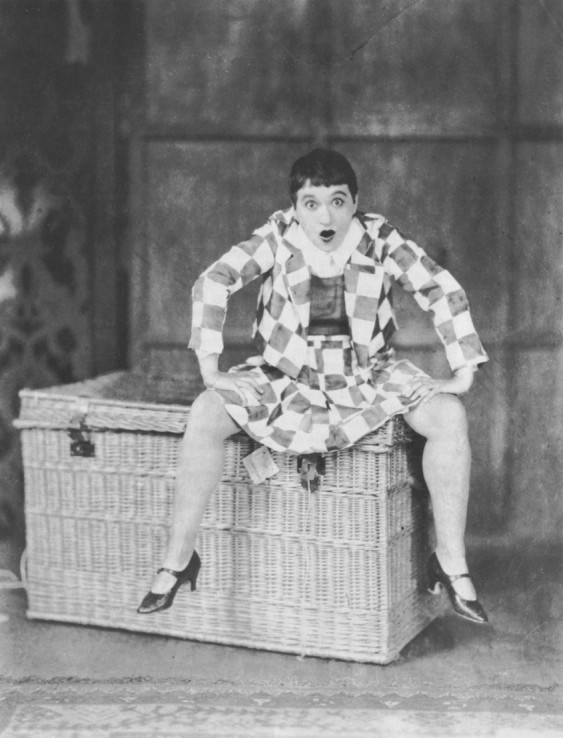 As she grew older Gert discovered that wilful impudence formed a powerful alliance with the provocations of emergent sexuality. Photographer Erwin Blumenfeld met Gert as a teenager; she was wearing a tight-fitting silk dress and during a high-spirited playfight he plunged a handful of confetti down her decolletage. Instead of the stiff corsetry familiar from his mother’s wardrobe his probing hand met warm flesh, and rather than the expected slap his impertinence was rewarded with a passionate kiss.

Once Valeska Gert was nominally enrolled in the realm of grown-ups, others were no less mysterious to her, nor she to them. Her contemporaries may as well have carried vermin in their petticoats for all she had in common with them. Even the avant-garde of Weimar Berlin couldn’t contain her; she had nothing but contempt for the Expressionists and although she was sometimes referred to as a “Dadaist dancer”, in her life, her art, her self-presentation, Gert always represented a subculture of one. She was pathologically unable to conform to any larger social grouping than that found within her own eccentric outfits.

A Paul Poiret parade provided early inspiration, and the street became her catwalk. Gert would prowl Kurfürstendamm, treating passers-by on the prestigious boulevard to an ensemble in flaming red or glaring orange, her garish gash of a mouth set in a chalk-white face under a black veil. She found a writing gig for fashion magazine Elegante Welt but her “tips” were satirical, subversive, mocking. “A layer of powder keeps everything nicely covered up,” she once advised her genteel readers, who were raised to associate any cosmetic adornment with prostitution. But for Gert, received societal roles – harlot, ingénue, grande dame – were just that: roles. In films, outré cabaret performances and in daily life she could infiltrate these personae from within and push their defining idiosyncracies outward to grotesque proportions.

The Weimar Republic at least provided a broader context for her confrontational style; once it collapsed, her radical art and no less radical appearance were sufficient to make her an enemy of the incoming Nazi regime. That Gert was also Jewish made it impossible for her to stay in Germany. She left in 1933 and lived out her exile in the US, Britain and elsewhere (we will return to this period at a later date).

Fast forward to 1949. Gert returns to the freshly cloven city of her birth, her challenging look undimmed by time or absence. In photos of the era she looks nothing like the war-battered hausfraus of her war-shattered hometown, evoking, instead, the uncompromising self-possession of Siouxsie Sioux in ’77. Once the counterculture, at least, had caught up with her she was well into her 80s but more contrary than ever. Her one exposure to a national audience came with a talk show, where Gert appeared with her customary white face topped with a jagged thatch. Fittingly, it was the young punks who really got her. Much of the viewing audience was simply repelled by the old woman with the spiky hair and barbed responses; others were fascinated yet bemused. Director Volker Schlöndorff sought her out on the island of Sylt and made a documentary about her but the essence of his subject eluded him.