Who Owns the World?

Produced in 1932, the film Kuhle Wampe, oder: Wem gehört die Welt? (Kuhle Wampe, or: Who Owns the World?) was directed by Slatan Dudow, but the message and style, along with some of its music and much of its script, came from German playwright Bertolt Brecht.

Writing in Berlin 1910-1933, film historian Ulrich Gregor noted that Kuhle Wampe “was the high point and, unfortunately, also the conclusion of a development that brought film makers and script writers into closer touch with their surroundings, underscored their responsibilities as artists, and brought to the fore a new consciousness of form.” The cinematic swan song of the “New Objectivity”, Kuhle Wampe draws on previous avant-garde depictions of Berlin, particularly Walter Ruttmann’s Berlin: Die Sinfonie der Großstadt (1927), which presents the city in a succession of busy documentary vignettes; and Robert Siodmak’s Menschen am Sonntag (1930), which combines similar episodes with scripted narrative.

Dudow’s film, too, intersperses its dramatic sequences with documentary footage (production lines, busy streets, sporting events). But unlike Siodmak’s film, which offered nothing more confrontational than some good-humoured class satire (and Die Sinfonie der Großstadt certainly had no ideological axe to grind), Kuhle Wampe is doggedly, dogmatically political. Coming at the tail end of the Weimar Republic it was that era’s most explicitly left-wing film, offering a last flash of defiance before Germany’s left was all but extinguished.

“Kuhle Wampe” (“empty belly” in Berlin dialect) is the name given to a colony of unemployed camp-dwellers on the edge of the city. We see a family turfed out of their apartment to the kind of semi-bucolic idyll enjoyed by city-dwellers at play in both Die Sinfonie der Großstadt and Menschen am Sonntag, but the appeal of the outdoor life is academic when there is no alternative. 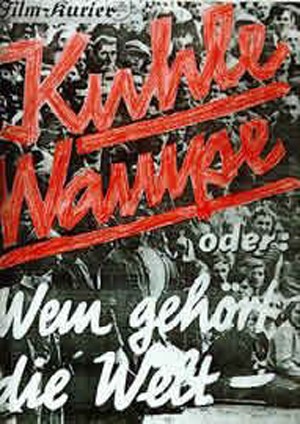 This was a film made in desperate times; Communist supporters were called in to prevent SA thugs from breaking up the shoot, and the production company went broke during filming. This desperation is vividly felt in Kuhle Wampe. As in previous studies of urban proletarian misery such as Mutter Krausens Fahrt ins Glück (1929) and Lohnbuchhalter Kremke (1930), one of the main characters commits suicide. Not that we are invited to see the protagonists of Kuhle Wampe as real people; in true Brecht style they are presented as types, depicted in broad strokes, representatives of the multitude with limited purchase on our empathy. Alienation techniques abound: at one point a character recites a chunk of Hegel, elsewhere the father of the house reads aloud a story about Mata Hari; the tale of luxury and intrigue among the ruling elite forms a jarring contrast with the family’s squalid living conditions. Towards the end, the action pauses for a montage soundtracked by a rendition of the crude, didactic “Solidarity Song” (with words by Brecht and music by composer Hanns Eisler, who was responsible for the rest of the soundtrack).

The last scene of dialogue is a classic piece of Brechtian dialectical drama, in which strangers on a train discuss world trade, artificial scarcity and consumerism through the example of Brazil’s coffee industry. The characters are not characters at all, but advocates of differing viewpoints. The scene ends with a call for collective action, before a reprise of the “Solidarity Song” over footage of a crowd walking away from the camera. Individuals, rarely trusted with much independence of thought throughout the film, are no longer even faces in the crowd.

Kuhle Wampe‘s caustic view of society and nakedly propagandistic intent pushed the boundaries of even the liberal Weimar Republic, whose judicial representatives are depicted in the film as bureaucratic and unfeeling. Scenes of nude swimming, and another sequence where the female lead undergoes an abortion, were cut; the excised footage was never recovered.

In fact the whole film was thought lost for many years. It goes without saying that the Nazis banned it, and Brecht himself left Germany in 1933, just days after Hitler’s takeover. And Kuhle Wampe simply disappeared. Even after the war it was nowhere to be seen, only re-emerging in East Germany in 1958, two years after Brecht’s death.

So this version, while far from perfect, is at least something. But for modern audiences it is most likely the film’s formal invention and intense evocation of a historical turning point which will appeal more than its boorishly articulated message.