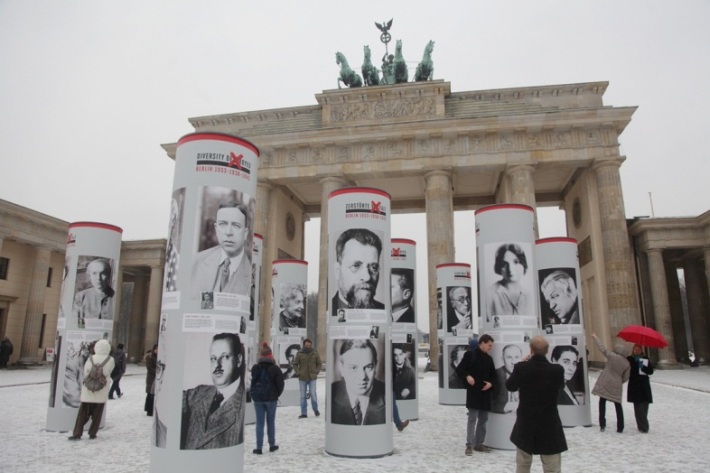 Today marks the 80th anniversary of the end of the Weimar Republic and the beginning of the Third Reich. For much of 2013 (which also sees the 75th anniversary of the “Kristallnacht” pogrom), Berlin is staging a huge programme of exhibitions and events under the banner “Diversity Destroyed”. It acknowledges, along with the incalculable human suffering caused by the Nazis, the immense loss to the city’s culture.

The programme’s official site profiles some 200 figures, many of them Jewish, who were forced into exile, progressively silenced, imprisoned, persecuted and/or murdered by the regime. They were the writers, artists, actors, filmmakers, publishers, architects, philosophers, musicians, composers, academics and critics who had made Berlin the world’s most progressive city during the Weimar era. To select just a few: Billy Wilder, Fritz Lang, Marlene Dietrich, Walter Gropius, Lotte Lenya, Erich Kästner, Bertolt Brecht, Kurt Weill, Valeska Gert, Albert Einstein, Hannah Arendt, Magnus Hirschfeld, Claire Waldoff. But it’s when you consider those who didn’t make the list that you begin to appreciate the scale of the loss. Yva is there, for instance, but not fellow photographer Gisèle Freund; Walter Benjamin, but not his friend and collaborator Franz Hessel.

I re-watched Public Speaking recently, in which Fran Lebowitz does what she does best (talks). At one point she describes the devastation of the AIDS crisis in 80s New York. Personal tragedies, obviously, but also cultural, as the best and brightest fell in many disciplines, along with their highly sophisticated audiences. Lebowitz imagines the dead returning, and saying to them “guess who’s in charge now!”. Because it was the second and third tier which rose to the top, as it was in Nazi Germany. And there arts and letters were dominated not only by lesser lights, but lights further dimmed by the narrow field of expression permitted in Hitler’s Germany. For those that got out (and most of those mentioned here thankfully did), Berlin’s loss was Hollywood’s gain, or Cambridge’s, or Tel Aviv’s. But as the fates of Benjamin and Hessel vividly illustrate, even exile was no guarantee of safety.

I’ll no doubt return to this programme throughout the year, but for now you can read up at the Diversity Destroyed site, or leaf through some Weimar Berlin-related posts from Strange Flowers’ back pages.