As chaotic as the diagram below looks, it would have been even more difficult had I followed my original idea of including more or less anyone of interest in Munich from about 1890 to 1914. That, I soon realised, is a fool’s errand and I instead fixed on writer and free spirit Fanny zu Reventlow, the “Cosmic Countess”, as a fairly arbitrary mid-point around which to gather, or attempt to gather, some of the key figures who made the Bavarian capital one of Europe’s most exciting, progressive cities of the era.

Munich’s avant-garde may have been on the margins of Wilhelmine society, but its proponents certainly didn’t lack self-regard, and a number of romans à clef testify to the interest they both took in themselves and ascribed to a wider readership.

Mapping the overlapping circles of the “Kosmiker”, adherents of Alfred Schuler, and those who gathered around Stefan George, is particularly challenging. I’ve left out some of the latter, and those I’ve included were arguably not all in the poet’s innermost circle. There are whole books on George’s followers so this was only ever going to be a cursory glance. The “Dada Baroness”, Elsa von Freytag-Loringhoven, took rather a larger role than is entirely appropriate considering that she was not intimately acquainted with Reventlow, but even in death it is in her nature to draw attention to herself. 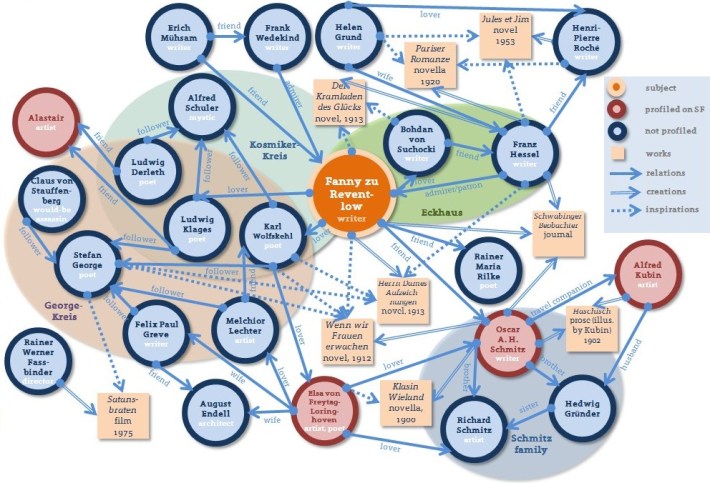