On Munich’s northern outskirts you’ll find Schleißheim, an ensemble of three palaces set in one of Germany’s finest Baroque gardens. The oldest palace dates back to the late 16th century, with the next coming about a century later. This offshoot, Lustheim, was intended as a hunting lodge, and the goddess Diana features prominently in its rich store of frescoes. To give you some idea of the scale, these two structures were located some 1.3 kilometres apart.

Around the beginning of the 18th century, work began on what is now known as the New Palace, or simply Schloss Schleißheim, which boasted a monumental facade which made both Lustheim and (the now) Old Palace look folksy and quaint. The whole complex was used as a summer residence for Bavaria’s rulers, although this was their spare holiday home, dontcha know, their main estival digs being Munich’s Nymphenburg. Ludwig I was the last king to pay Schleißheim much attention; his grandson Ludwig II (born, incidentally, in Nymphenburg) famously preferred to build his own palaces than make do with hand-me-downs. After the First World War, Schleißheim was turned over to the state.

But for our purposes, Schleißheim gets interesting when it becomes home to an artist, musician and dancer by the name of Hans-Henning von Voigt, a.k.a. Alastair.

I’ve already quoted from film producer Peter Berling’s memoirs Hazard & Lieblos, specifically the section dealing with the documentary Berling made about Alastair. Elsewhere Berling relates that Alastair claimed to have been hidden by the Wittelsbachs (Bavaria’s ruling dynasty) in Schloss Lustheim during the Second World War. Either Berling is conflating anecdotes (which were recounted several decades back, after all) or Alastair – who claimed to be a bastard child of Edward VII – was once more bending the truth. Alastair did in fact live in Schloss Lustheim, but it was in the first half of the 1920s and was facilitated not by royalty but the impressive means of his lover André Germain, a friend and biographer of Gabriele d’Annunzio (who also penned studies of Proust, Goethe and Renée Vivien). Crucially, Germain had foreign currency to spare during Germany’s period of hyperinflation, allowing Alastair to live in luxury.

Alastair had given dance performances in Munich before the First World War, and had links with the circle around poet Stefan George. Back then he was a localised phenomenon, but his residency at Lustheim coincided with a period which offered if not fame, then a small measure of international notoriety. Ultimately, his sumptuous surroundings permitted the full flowering of Alastair’s greatest work: himself.

Back in the big house, things got interesting again around the early 1960s. That’s when French director Alain Resnais followed up his acclaimed movie Hiroshima mon amour by filming an Alain Robbe-Grillet screenplay, a daring, dazzling, confounding meeting of Nouvelle Vague and Nouveau Roman called L’Année dernière à Marienbad (“Last Year at Marienbad”). Key scenes were shot in Schleißheim’s Baroque garden (including its topiary work which mysteriously casts no shadow), with interiors filmed both inside the palace and at Nymphenburg.

With memory as its central theme, Marienbad proceeds – as it must – in a disjointed, enigmatic, dream-like fashion through an airless interzone. Gestures are cramped and automaton-like, dialogue repetitive and circular. It is unclear if the “action” unfolds over a few seconds or over a lifetime. But complaining about Marienbad‘s lack of conventional narrative is like standing in front of a Jackson Pollock and wondering where the basket of fruit is.

Like Heaven’s Gate (which – and naturally this is a question of taste – was a perfectly fine movie in search of a ruthless editor), Marienbad elicits strong opinions, many of them negative. Received wisdom often depicts it as the ultimate arthouse put-on, insufferably pretentious, stylised nonsense clad in stylish nothingness. Harry Medved’s 1978 book The Fifty Worst Movies of All Time is at least entertaining in ripping the film un cul nouveau: “stuffy, arty, incomprehensible, and monumentally boring – imagine yourself trapped for twelve hours in a Saks display window after closing time.”

It’s a typical response, but it’s also – and I say this with love – utter horseshit. Last Year at Marienbad is one of the most profound, beautiful, mesmerising films ever made. The idea that anyone could view even a few minutes of it and come away thinking they had been hoodwinked by some cinematic sleight-of-hand is baffling. Sure, it might take a couple of viewings, and it wouldn’t hurt to read up on the various theories regarding its underlying structure (the theatre performance depicted early on is key), but the rewards are copious. While art direction is by no means the film’s sole virtue, it looks incredible, with Chanel costumes, sumptuous interiors and manicured gardens. The whole thing is an elegant, elegiac evocation of the vanished world of “parks, hotels and palaces” summoned by Kraftwerk’s “Europe Endless”.

The 2010 documentary Souvenirs d’une année à Marienbad gives the background story to this cinematic landmark. It’s narrated by German director Volker Schlöndorff, who was second assistant director on the film and, like many other cast and crew members, fell under the spell of the beautiful star, Delphine Seyrig. While Schlöndorff is sadly no Werner Herzog when it comes to narration, it’s still a diverting look behind the scenes, but for true insight, the half-hour study Dans le labyrinthe de Marienbad is essential.

Meanwhile the entire Schleißheim complex is open to the public, and as well as extensive royal apartments the New Palace has an important collection of Baroque paintings. And while the refined, reclusive Alastair would have little time for the tourists who now visit Schloss Lustheim, its use as a porcelain museum (with the best collection of Meißen porcelain outside Dresden) would presumably appeal to his exalted aesthetic sense. 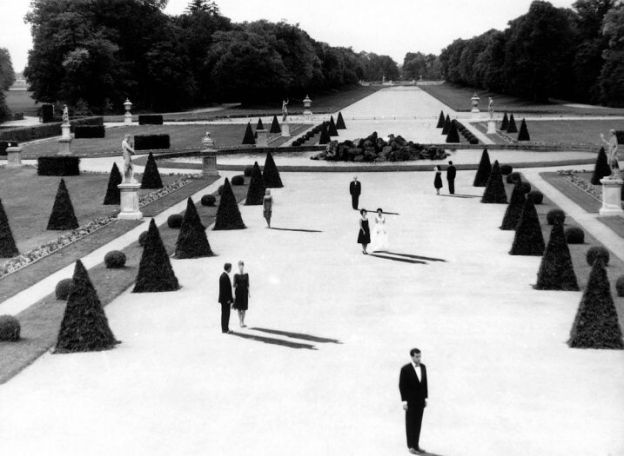