I am such miserable thing

If you have any level of interest in Baroness Elsa von Freytag-Loringhoven north of “idle fancy”, you will doubtless be fascinated by the huge amount of material by and about her which can be found online. The University of Maryland, particularly, holds an invaluable archive of the “Dada Baroness” (born on this day in 1874), including drafts of her autobiography – both in her own distinctive upper case handwriting and typescript – which was subsequently reworked by Djuna Barnes.

I’ve only scratched the surface but there are already some amazing treasures here, including dozens of poems in Elsa’s hand as well as a large amount of correspondence. Most of the letters date from the mid-1920s when the baroness had returned to Europe from New York and found herself on an unremitting downward spiral which only ended with her death in 1927. She sold newspapers in Berlin and was otherwise reliant on the support of friends. In desperate straits she turned to her father-in-law, to Peggy Guggenheim, even to George Bernard Shaw (“BERNARD SHAW – YOU ARE SUCH GREAT THING – I AM SUCH MISERABLE THING – THAT IS ALL I CAN TELL YOU”).

The letters make pretty difficult reading in every sense (deciphering the handwriting, parsing Elsa’s eccentric syntax and then encountering the desolation of her life). For light relief we must go further back, via the University of Manitoba’s archives of materials relating to Felix Paul Greve (Elsa’s second husband, later Frederick Philip Grove), and Elsa herself. This 1910 newspaper clipping is much more the baroness we know and love, finding her and Greve arrested as “suspicious persons” thanks to Elsa’s cross-dressing (although this was frankly at the vanilla end of her sartorial repertoire, as New York would soon discover). 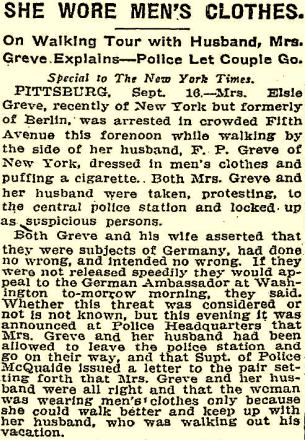