Thanks to Front Free Endpaper (now celebrating seven years of blogging, which is 415 lifetimes in real terms, or something) for highlighting this catalogue, written in French and English and detailing rare publications relating to Jacques d’Adelswärd-Fersen. He was, you may recall, the French Decadent aristo-poet who moved to Capri after his “at homes” were revealed to be less of the macarons-and-small-talk variety and more devil-worship-and-homoerotica. Some years after the baron died in obscurity in 1923 his reputation was revived by his countryman Roger Peyrefitte. 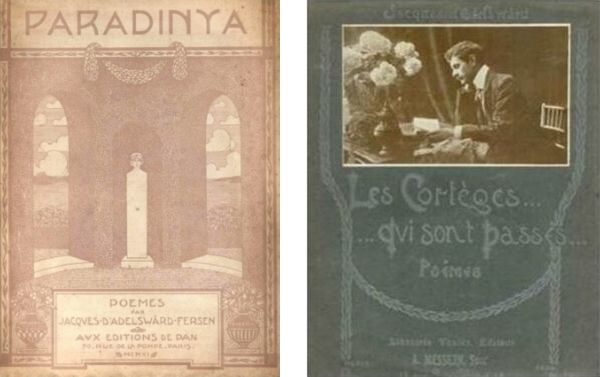 The catalogue offers much to gladden the heart of anyone interested in queer/Decadent undercurrents of the Belle Époque. Naturally almost all of Fersen’s own work is represented, largely in the form of very rare first (and usually only) editions, as well as issues of his literary journal Akademos (partly bankrolled by Mathilde de Morny). There are also original works by contemporary writers, some commenting on the Fersen scandal, others riffing generally on gay themes. They include (deep breath, pause for emphasis) Alfred Jarry, Jean Lorrain, Rachilde, Liane de Pougy, Renée Vivien, Natalie Barney, Marcel Proust and Robert de Montesquiou (with a letter in the count’s own hand), and outre-Manche representation from the likes of Marc-André Raffalovich and Oscar Wilde.