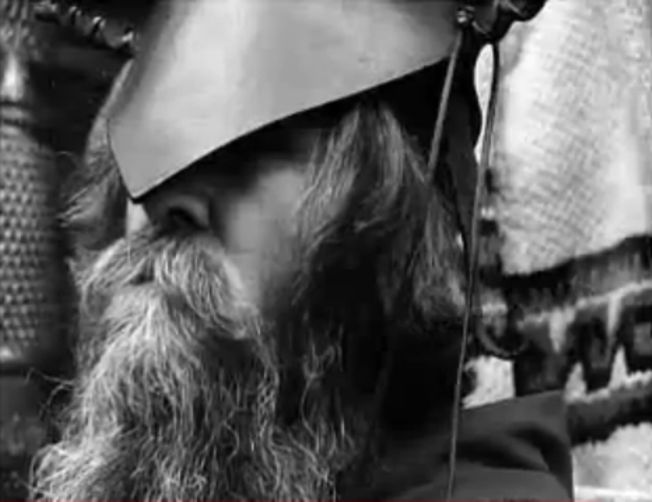 Blind street musician, poet and composer Moondog, who was born on this day in 1916, was a high-profile, eccentrically-garbed presence on Manhattan streets throughout the 1960s and into the ’70s. Given his visibility and the fact that he lived until the end of the millennium, it’s always puzzled me that I couldn’t find any videos of him online – on the street, in concert, in interview or otherwise. I’m convinced that such footage is out there and just hasn’t been digitalised, but in the meantime I recently came across these two tantalisingly short feature film extracts from the 1960s.

The first comes from The Moving Finger (1963), a “beatnik film noir” set in Greenwich Village. From this brief encounter it’s hard to know if we’re dealing with an open-minded dip into the underground or a beatsploitation flick. In any case, there’s Moondog, playing himself, standing on the street in viking warrior garb of his own devising. Find more on The Moving Finger here.

The other fragment is from the utterly intriguing sounding Chappaqua (1966), whose cast includes French film legend Jean-Louis Barrault along with walk-ons by countercultural luminaries like William Burroughs, Allen Ginsberg, Peter Orlovsky, Ornette Coleman and Ravi Shankar. It sounds like this is definitely worth returning to, but in the meantime, here’s a glimpse of Moondog: