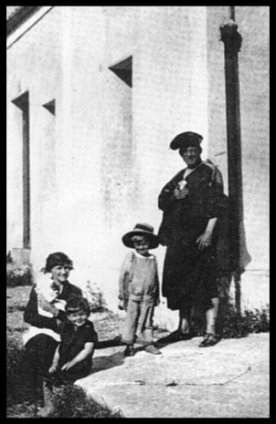 Crowley at the Abbey

A full day of talks, readings and discussions entitled “Aleister Crowley: The Prophet of the New Aeon” takes place in Treadwell’s Bookshop in London tomorrow. Now, maybe you think if Aleister Crowley really were the prophet of the new aeon that you’d happily sit said aeon out. And maybe you look at the vast acreage of online Crowleyana and secretly, peevishly suspect the Internet was invented largely so that occultists and conspiracy theorists could share Great Beast-related arcana with each other.

But there’s another dimension to this event that warrants more attention. Proceeds, and one presumes some corollary consciousness-raising effect, will benefit the site of Crowley’s Abbey of Thelema, actually a modestly-sized house in the Sicilian city of Cefalù. Crowley took a band of acolytes there in 1920 and conducted some of his most extreme excursions into ritualistic practice before being booted out by the new fascist regime in 1923. Since then the Abbey has slid further and further into ruin, its lurid wall paintings deteriorating. Filmmaker Kenneth Anger rented the house in three months in 1955 and started restoring the murals, returning for a visit in 2004.

If you were glib you could describe it as a kind of Satanic Vatican. And even those of us who don’t subscribe to the cult of Crowley would have to acknowledge the Abbey of Thelema as a crucial site in the development of 20th century underground culture, and any efforts to resurrect it must constitute a positive development.

Leave a Reply to The Great Beast Cancel reply