Places: Under the Hill

More Adey had all the attributes essential for 1890s English Decadent A-gays. Friendship with Oscar Wilde: tick. Conversion to Catholicism: tick. Rarefied tastes in arts and letters: tick. But the fact that you most probably haven’t heard of him speaks of a persona which was at once more scholarly and less flamboyant than most of the Wilde bunch he rolled with.

Not that he wasn’t intriguing. Far from it. My interest in this elusive figure was sparked by a peevish recollection by Siegfried Sassoon, as quoted in Stenbock, Yeats and the Nineties:

He was a sallow, moody little man with lustreless, dark eyes, who smoked ceaseless cigarettes…He could be humorous, and even playful, but there was a solitary and frustrated existence behind it all. After the War he retired to a fine old manor house in the west of England – a property which he had inherited as a young man. His oddity then became actively apparent, and for a while he was happy. Having got it into his head that the house contained hidden treasure, he employed a number of workmen to pull the place to pieces. Free cider flowed like water while More Adey gleefully superintended his party of demolitionists, walking about in a long black cloak, with a tame rook perched on his shoulder. No treasure was found, and the poor lord of the manor was finally removed from the scene to live on for a few years as a certified case of mental derangement.

After that, who wouldn’t want to know More? 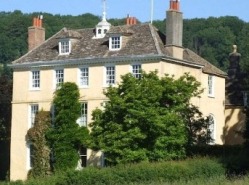 It turns out that the “fine old manor house” is key. Located in the venerable Cotswolds market town of Wotton-under-Edge, Adey’s family home, Under the Hill, remains an impressive sight. It’s a fine Queen Anne manor on the edge of town presenting a serene clotted cream-coloured façade, partly veiled in vines. The address – Adey’s Lane – signals the family’s long association with the area. Through More Adey, both the house and its location would additionally assume a curious place in the literature of the 1890s, which we will come to shortly.

William More Adey was born in 1858, putting him closer to Wilde’s age than the younger men who later associated with him. He attended Bristol’s Clifton College, alma mater of diabolist bibliographer Montague Summers, who is waiting impatiently for his turn on Strange Flowers (and Clifton, as it happens, was where my partner went to school; he expressed surprise that there were old Cliftonians who had achieved distinction in pursuits unrelated to armed combat).

It was at Oxford that Adey most likely first met Wilde. He lived with another Wilde loyalist, Robbie Ross, for 15 years and the two men were, apparently, lovers. Adey at first turned to literary work, with some success. He was one of the first to translate Ibsen into English, and worked on a translation of Balzac short stories with the sublimely perverse Count Eric Stenbock. He became Stenbock’s literary executor on the count’s death in 1895, which, as we have seen, occurred on the first day of the Wilde trial.

That trial, and the subsequent fall-out, was Adey’s greatest test of character. In the face of hysterical public outrage he remained true, visiting Wilde in prison and helping to manage his affairs. Among Wilde’s unfinished works is The Cardinal of Avignon, which survives as a sketch in Adey’s hand. Wilde, though grateful, was at times exasperated. “You are patient to excess,” he wrote to Adey on one occasion. “Your forbearance is beautiful. But you have not got enough common sense to manage the affairs of a tom-tit in a hedge.” 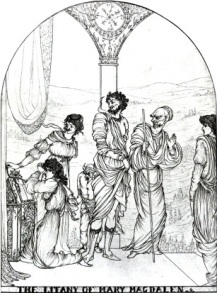 The Litany of Mary Magdalen, a Beardsley drawing originally owned by Adey

During the 1890s Adey turned towards collecting, selling and commenting on art. As well as writing for and later co-editing the influential Burlington Magazine, Adey was one of the first to collect Aubrey Beardsley’s work, and owned several paintings by Pre-Raphaelite artist Simeon Solomon. He applied his expertise in setting up the Carfax Gallery with Roger Fry, which became a major catalyst for the likes of Augustus John, as well as popularising continental artists such as Rodin, with whom Adey maintained a correspondence. 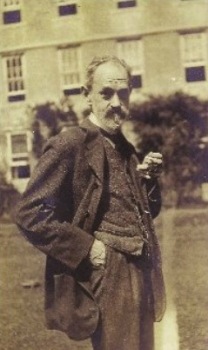 Adey quit the Burlington Magazine in 1919 and retired to Under the Hill. Here Osbert Sitwell remembered him as appearing like “a watercolour drawing of Lenin…rendered through the etherealised vision and the etiolative hand of Burne-Jones”. Among his other visitors was Wilde’s son Vyvyan Holland, who snapped him in front of the house.

As Sassoon relates, Adey’s behaviour became increasingly erratic. Immured in an institution for the last years of his life, his psychical twilight came to an end on this day in 1942.

Under the Hill, meanwhile, changed hands last year for 610,000 pounds, which seems like a bargain considering its historic and literary credentials. Here: have a snoop around. You know you want to. 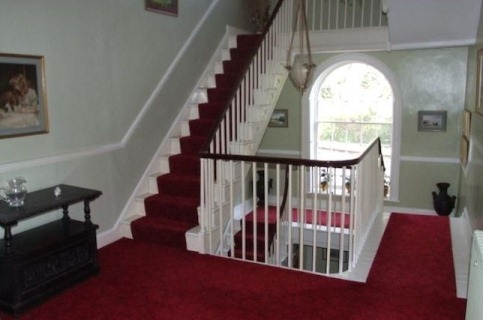