Nothing better epitomises the contentious voids which gnaw at the heart of Berlin than the grassy expanse where the imperial Schloss, a charmless Prussian monolith, once stood. At the centre of the capital, which in just about any other city would be bursting with pomposity, bristling with spires, abounding with columns, Berlin has…a lawn. The Schloss was damaged in the war, but not irreparably so, and in 1946 its shell was stable enough for visionary architect Hans Scharoun to present an exhibition which represented ambitious plans for rebuilding the whole city. Those plans soon foundered on the realities of the Cold War, while the East Germans finished off this remnant of imperial, war-mongering Germany, and put a glass-fronted eyesore in its place, now also gone. Shockingly, the terrible, reactionary idea of rebuilding the original palace is in an advanced state of becoming. Berlin, once a forward-thinking showcase of the best in architecture and city planning, is reduced to empty-headed pastiche of an imagined golden age.

Leaving this blank behind us, we head on to what was once the medieval heart of Berlin, now…nothing in particular. Not even the traces of those narrow streets and lanes. Not even a lawn, just a few East German office buildings vomited up in the 1960s, earmarked for, or in the process of, demolition. One of the most depressing exhibitions I’ve seen in recent years compared Berlin’s once crowded medieval cityscape with what remains. Yes, the war which devastated the centre was largely to blame, but misguided modernising initiatives claimed victims both before and after the bombs fell.

We head along Wallstrasse, which appears barely inhabited let alone occupied, on past the majolica-fronted Australian Embassy, once home to the Central Committee of the German Communist Party, and past the bears of Berlin. Not the bearded, beer-bellied, bel canto-loving variety (wrong part of town for them), but actual brown bears, the city’s mascots who live in their own pit.

We arrive at the Märkisches Museum which can tell us more about Berlin’s vanished core. It’s devoted to the history of the city although its name and historicist façade allude to the historic domain of Brandenburg. We encounter Charlotte von Mahsldorf again, who worked here until 1971 when she was dismissed after management found out that she, still living as a man in public, had attended a party in women’s clothing. Charlotte’s one step ahead of us – she was stalking these streets for traces of the past back in 1994, when she published Ab durch die Mitte, a walking tour of Berlin’s historic heart. It’s accompanied by a reflective photo essay by Burkhard Peter and represents a crucial turning point before most buildings were fixed up and many of the holes filled in. As she relates in the book, the wind-up music machines were Charlotte’s favourite displays in the Märkisches; the museum remembers not just the headline events of the capital’s history, but also its follies and diversions, with relics from nightclubs, bars and other pleasure spots. 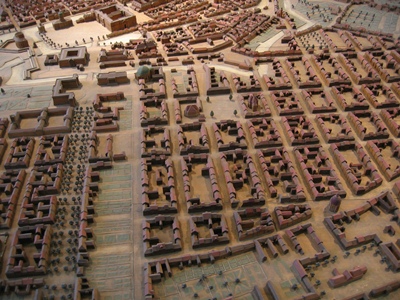 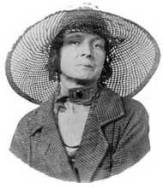 A few blocks away on Friedrichstrasse we find the site of one of those pleasure spots, perhaps the city’s greatest: the Wintergarten. Valeska Gert was once contracted to perform here but refused, calling it “kitschy”. Back in 1894, Elsa von Freytag-Loringhoven, later known as the “Dada Baroness”, had no such qualms. She appeared in a production which saw near-nude performers arranged in tableaus meant to recreate famous paintings and sculptures: kitsch imitating art. Offstage, Elsa was pioneering a masculine style later adopted by Anita Berber (who performed here in 1917) who would pass it onto Marlene Dietrich.

One year after Elsa’s still life, the Wintergarten witnessed the birth of cinema. This was the first place in the world that an audience paid to watch moving images, presented by Berlin’s own filmmaking entrepreneurs the Skladanowsky Brothers. They may have been outclassed by the Lumière Brothers, but they got there first.

In the second half of the 1920s, singer Claire Waldoff took the man-style of Elsa, Anita and Marlene one step further; it became her trademark as she presented her earthy material at the Wintergarten. Songs like “Raus mit den Männern ausm Reichstag” (“Chuck the men out of the Reichstag”), were served up in proletarian Berlin dialect for her largely bourgeois audience. Waldoff lived openly with her partner Olga von Roeder and is remembered in a frankly disturbing memorial further up Friedrichstrasse, her teeth-baring head served up on a plinth.

The Wintergarten was destroyed in the war. The greatest showcase of Weimar variety and the birthplace of cinema is replaced by, among other things, Dunkin’ Donuts.

On the other side of Unter den Linden we would once have found the Weisse Maus, its site now taken by an upscale shopping mall. The Weisse Maus (“white mouse”) here stands in for any number of cabarets which flourished in Berlin during the Weimar era: the sites associated with Anita Berber alone could constitute a tour in themselves.

For it is indeed Anita who we’ve come to see. It’s 1923. Anita, originally from Leipzig, is already seared into the cultural memory of Berlin, its most notorious performer. She has appeared in numerous films (generally clothed) and in cabaret (often naked). By now she has hooked up with her masculine counterpart Sebastian Droste, and the two goad each other to ever-greater feats of transgression, onstage and off.

By rights Anita should have moved on from the Weisse Maus by now. It’s certainly more risqué than the Wintergarten; patrons fearing public scandal are given masks to protect their identity. As for the entertainment, well at the Weisse Maus there’s a fine line between performer and prostitute, but Anita Berber leaves no doubt that she is not on the menu. She acts up and acts out, urinating on stage, breaking a champagne bottle over a punter’s head. The confrontational violence isn’t part of the programme, rather it springs from the dissonance between what Anita thinks she is providing (art) and what the audience wants (T&A).

It’s more fun in the telling than the experiencing so we make our excuses and leave, but I recommend the excellent Cabaret Berlin for further reading on this era. 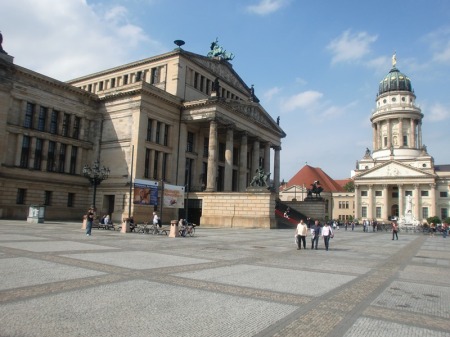 The site of the Weisse Maus loiters behind the imposing neoclassical Konzerthaus, designed by Schinkel. It’s flanked by two domed churches on Gendarmenmarkt, Berlin’s grandest square. In 1932 the Konzerthaus was the Staatliches Spielhaus, a site for theatre rather than the classical concerts it hosts now. This is where actor and director Gustaf Gründgens performed the role of a lifetime as Mephisto in Goethe’s Faust. He was back in 1934 as the head of the Spielhaus, protected by the Nazis, an arrangement which inspired Klaus Mann’s bitter 1936 novel Mephisto.

All of the abovementioned worlds came together at the Mulackritze. To step across its threshold was to enter a shadow world of notoriety, of criminality, of sexual volatility. This is where we would originally have found the bar now in Charlotte’s cellar (see part 1). It was once patronised by the kind of milieu described in Alfred Döblin’s Berlin Alexanderplatz. Joseph Roth (who we will meet again in the West) also left a vivid description of the sub-legal activity which defined the area. “A girl patrols up and down, like a pendulum in her regular unceasing motion, as if she’d been set going by some invisible clockwork.”

The Mulackritze might have been a dive bar in a disreputable neighbourhood, but it had an impressive clientele, with Waldoff, Gründgens, Dietrich and Bertolt Brecht all dropping by. There were days when men dressed as women, there were days when women dressed as men. Ground-breaking sexologist Magnus Hirschfeld came by to research the cross-border traffic, the grenzgänger of gender and sexuality.

The bar survived after the war as a meeting place for gays, lesbians, cross-dressers and prostitutes, but was eventually closed in 1960. The building disappeared in 1963 but not before Charlotte saved the bar, later earning a medal from the federal government for her troubles. There was still an empty plot when she returned in 1994, but it has since been filled by a new building typical of post-Reunification central Berlin. The shop on the corner sells womenswear of an after-five persuasion, but the little black dresses are cut too far above the knee for Charlotte’s taste I would imagine. This neighbourhood where the police once feared to tread is in an advanced state of gentrification, a precinct of galleries and coffee shops, fashion-forward spectacles and shiatsu masseurs. 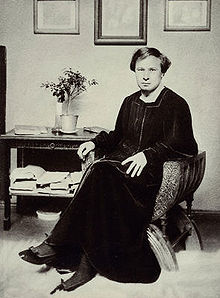 Of course some areas of Berlin have de-gentrified over the years. Once a boulevard of upmarket consumerism, Leipziger Strasse is now little more than the quickest route between Alexanderplatz and Potsdamer Platz. Elsa von Freytag-Loringhoven, who we just saw at the Wintergarten, lived here in the late 19th century. Then still Elsa Plötz, she had already studied art in Berlin but made her definitive move from her family home on the Baltic Sea to the capital of the empire in 1893.

Just 19, Elsa was already a goal-oriented pursuer of men. One of her first conquests in Berlin was the artist Melchior Lechter (who years later would die at Rilke’s grave). Part of the po-faced fancy-dress circle around poet Stefan George, in photos he looks like a fin-de-siècle sufragette. Elsa, as she normally did in relationships, took a dominant role; Lechter painted her as Orpheus.

It was in Berlin that Elsa collected two of her three husbands – August Endell and Felix Paul Greve (who later faked his own suicide and popped up in Canada as Frederick Philip Grove but that, as they say, is a whole ’nother story). We’ll see Elsa again in Berlin, but it won’t be a pretty sight.

As for the building, well it’s gone now, another of those unproductive blanks unimaginable in the centre of any other Western European city. The street lights nearby are festooned with breathtakingly offensive campaign posters for the far right, anti-immigration NPD, a largely marginalized party constantly flirting with government abolition. One of the posters shows grotesque caricatures of an Arab, a Turk and an African being spirited back to their “homelands” on a magic carpet. 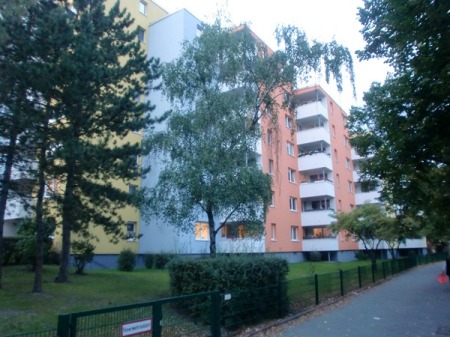 We take a wide arc now to the city’s north, to the working class area of Pankow. It was home to those accidental cinematic pioneers the Skladanowsky Brothers we discussed back in the Wintergarten (the early footage of a man boxing a kangaroo? That’s one of theirs.) Otto Witte was another noted Pankow resident, and like the Skladanowskys he was essentially a showman, a carnie, an entertainer.

Otto’s golden age, which he never let anyone forget, was 1913. That’s when he claimed to have been the King of Albania for five days, through a bizarre set of circumstances and coincidences which only took place, as far as we can ascertain, in his head. Otto was a grenzgänger who moved between the worlds of truth and lies, showmanship and reality. A show is just a lie, so how can a victimless, winningly delivered story about one’s fleeting kingship be anything but an enrichment of the dull truth?

It’s getting dark and it’s a long way home so we should head for the S-Bahn station, right on the old Wall. Gopher-like, we will pop up on the western side of it in the next part.