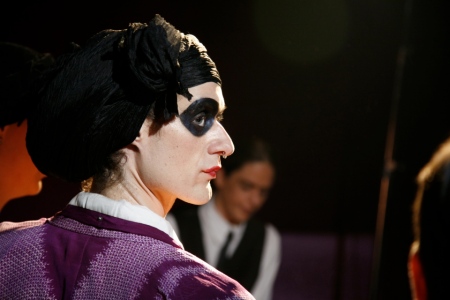 The life and legend of Strange Flowers favourite Anita Berber offers inexhaustible material for academics and ahem armchair cultural historians (guilty). The dancer slash actress slash outré provocateuse, who died in 1928, can be read as an exemplar of Weimar licentiousness, a fearless transgressor of taste and genre, or a queer performance artist decades before either queer theory or performance art had names. 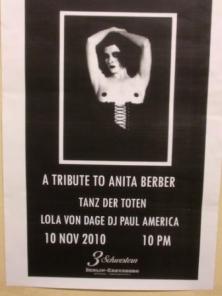 Not surprisingly, all of these aspects inspire contemporary artists as well, not least in the city where Berber lived and died, Berlin. We’ve already looked at the film by Rosa von Praunheim which examined her life through the unreliable memories of a disturbed woman claiming to be the long-dead artiste. And naturally enough she continues to influence dancers: last November saw a performance in the very hospital where Berber met her premature end (now a complex of artists’ studios).

Add to that list a new short film Frida & Anita, by Berlin-based artist Liz Rosenfeld, which had its premiere here yesterday. The film imagines Frida Kahlo meeting Berber in Berlin in 1924, although set in contemporary locations and implicitly bringing Anita to the kind of milieu she might now inhabit if she returned to the city. Stage scenes were shot at Neukölln’s Silver Future, a queer bar a few streets from the blogging chair in which I currently sit, and the film was screened in Moviemento (Germany’s oldest cinema, cinema fact fans), also nearby, which was an underground, multi-disciplinary melting pot in the late ʼ70s/early ʼ80s.

And while we’re on local creativity, I’ll leave you with a sad and beautiful song for the weekend. This live performance was shot next door to Silver Future; the singer is my super-talented friend Tammy Ingram. Enjoy: