A quarter of a century ago, the only son of the wealthiest man in Europe died alone and indebted. Arndt von Bohlen und Halbach, last scion of Germany’s Krupp steel dynasty, returned to the Earth whose bounty had made his family as rich and powerful as many a nation state. Not that they ever seemed to enjoy it; the Krupp family exemplified the poisoned chalice of vast inherited wealth more than any other. It’s a trajectory familiar to us from the New World descendants of railway magnates and robber barons, but here it bears a sooty layer of Middle European horror: the Gettys go gothic. Their Essen headquarters, Villa Hügel, was a Valhalla of in-fighting and treachery. If anything, Visconti was holding back in his thinly-veiled portrayal of the Krupps in the decadent, hysterical The Damned, which, coincidentally, popped up as a reference just a few days ago.

There are more links; it didn’t start out that way, but today’s post appears to be the third in a trilogy of inheritance. Like Ludwig Wittgenstein, Arndt renounced his legacy. Like Evan Morgan, he was born to an aristocratic title as well as wealth (and similarly converted to Catholicism, once he had exhausted Protestantism’s opportunities for dressing up). Essentially none of the trio wanted anything to do with the family business and all three were, as it happens, gay.

Arndt is riveted as his papa talks steel

Born in Berlin in 1938, Arndt was the only son of Alfried von Bohlen und Halbach and his wife Annelise. He almost never was: Alfried’s mother Bertha (now there was a piece of work) apparently offered Annelise 100,000 marks to have the child aborted. For the Krupps, money was no less a weapon than the armaments produced in their factories which had decimated a generation. After the child was born, Bertha upped the ante and presented Annelise with a contract. It offered her 1 million marks to divorce her husband (though it’s not even clear if she ever saw the money). It was an obscene proposition which would have its echo in Arndt’s lifetime.

The Krupps, enthusiastic supporters of the Nazis, were keen consumers of slave labour, working thousands of prisoners, predominantly Jewish, to their death. After the war, Alfried was convicted of crimes against humanity at Nuremberg, though he served just three years of a projected 12 year sentence, and got the family firm back.

It’s hard to imagine a worse start in life than the gallery of grotesques who made up Arndt’s family. His schoolyard friends were well aware of Arndt’s background, and that his father had been designated a war criminal. Acting out against the men of steel he was meant to emulate, Arndt pumped up the fabulosity: concerned letters from his boarding school mentioned bleached hair, perfume and makeup.

He was encouraged in all this by his smothering Mutti, who delivered new supplies of cosmetics as well as enlivening one Carnival by dressing Arndt as a lobster (complete with glowing feelers). Arndt for his part bribed his schoolfriends to be nice to his mother when she visited.

Arndt was scarcely shaping up to be a captain of industry, while Alfried was under government pressure to turn the vast family business into a listed company. And so one evening in 1966 Alfried and his adjutant more or less bullied Arndt  into renouncing his inheritance, haranguing him into the early hours of the morning. He was paid off with an income which – while enviable – was a fraction of the firm’s value.

At least it took Arndt off a career path he never really wanted. He became a free-spending man about town, a gossip column fixture. There were heavy hints about his sexuality, with allusions to his great-grandfather Fritz who took his life at the beginning of the 20th century after newspapers threatened to out him.

So it was something of a surprise when Arndt married a minor princess, Henriette von Auersperg, on Valentine’s Day 1969. His warm-natured wife seems genuinely to have loved her husband, tolerating his long absences, numerous affairs and Annelise’s vicious, controlling jealousy. Although in later years they spent little time together, their unlikely union lasted, on paper at least, until Arndt’s death.

Soon after the wedding, like Webster’s Dictionary Arndt and “Hetti” were Morocco-bound. Visitors like Yves Saint Laurent, Jean-Paul Belmondo and Mick Jagger made their Marrakesh home an essential stop on the jet set circuit. Otherwise Arndt secluded himself on his yacht, in his Austrian country mansion, or later at the Palm Beach house which he renovated at huge expense. If he entertained it was usually alongside his mother; Henriette was rarely in the picture.

Arndt’s heedless expenditure extended to his charitable works, including hospitals and other facilities in the Philippines and Thailand. In 1982 he was welcomed into the Catholic church by Manila’s archbishop and prominent opponent of Marcos, Cardinal Sin (and after all these years, what simple pleasure his name still affords…). 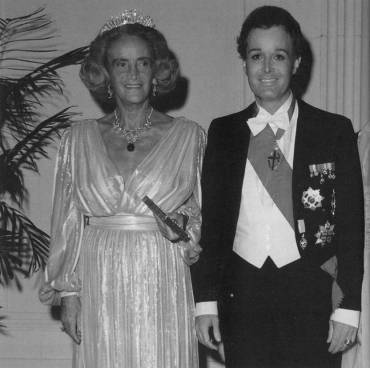 In Manila Arndt would also undergo plastic surgery. “You’re so young, you’re so beautiful, you’re so rich,” Annelise used to tell her teenage son, but his efforts to stay young and beautiful left him looking cartoonish (specifically, a cartoon by The New Yorker‘s William Hamilton). The surgery would also prove lethal. Arndt had developed jaw cancer, and he was informed that further cosmetic intervention would kill him. The advice was in vain. Towards the end he was apparently masking the pain with heroin, hidden among the books in his Palm Beach library. His mother kept the world, including his wife, at bay.

Arndt’s physical decline was accompanied by bizarre behaviour, even more out there than his upbringing might have foretold. There had already been signs of galloping megalomania: at the Rio Carnival Arndt spent 100,000 marks on an Aztec emperor costume, and he was once photographed on his yacht with an imperial wreath and sceptre. He was constantly surrounded by a retinue, as he was even in his school years, when concerned letters home referred to Arndt’s “court”: fellow students bought as companions.

Later his entourage was an assortment of rent boys, jet-setters and non-aligned hangers-on. He dressed his servants in operetta uniforms, and as his grip on reality loosened, he elevated members of his retinue to the status of “minister” and gave out bogus medals, which also lavishly decorated his own chest.

Arndt commissioned a portrait of himself as a king complete with crown, sword and sceptre. The queen painted at his side was not his wife, but his mother. More than anything Arndt’s decline resembles Michael Jackson’s delusional taste-free cult of self, which saw him enthroned as benevolent, surgically-perfected, regal, weighed down by decorations.

Remarkable footage shows an almost unrecognisabled Arndt, wigged and painted, receiving a (real) Catholic order in recognition of his charitable work, accompanied by his wife. It was his last public outing: six months later the last Krupp was no more.