On this day in 1958, the little French town of Blaru witnessed one of the more bizarre spectacles of the 20th century: a duel, fought by sword and featuring two highly unlikely combatants. Duelling was officially outlawed in France in 1626, but sporadic bouts were still carried out even in the modern era. But it was generally trigger-happy soldiers or cuckolded lovers who tended to defy the ban, not the likes of this pair facing a large press contingent in a gloomy Normandy field. 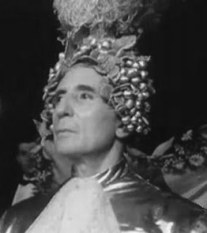 George de Cuevas was born Jorge Cuevas Bartholín in Chile in 1885. A balletomane bursting with ideas, Cuevas made his way to Paris where he toiled for a time in the couture house of recent Strange Flower Felix Yusupov. To achieve his dream of being the new Diaghilev he married a Rockefeller, bought a Spanish marquisate and started his own troupe. His wife’s money also came in handy in retaining the services of rent boys.

Serge Lifar was a Ukrainian-born dancer appointed as a soloist to the Ballets Russes by Diaghilev, who convinced his new star to have a nose job. The two conducted a tempestuous affair and Lifar saw himself as a more literal heir to Diaghilev, hoping to take over the Ballets Russes when the master impresario died in 1929, but he was unpopular and the company folded. Lifar turned instead to the world of classical ballet at the Paris Opera, where he remained for almost 30 years.

The point of honour which prompted the duel was a dispute over Cuevas’s staging of one of Lifar’s ballets. Why a piece of overblown shop-talk should demand satisfaction is unclear, but there was a theatrical element to the entire episode. Lifar was a relentless self-promoter, and Cuevas was hardly shy of the press, inviting them to watch him train for the bout. He may have seen the duel as a chance to improve his standing in France, where he remained notorious for a ball he staged in Biarritz in 1953, considered scandalously indulgent for the austere post-war period.

When the two finally faced each other in battle it was soon clear that neither was much of a swordsman, and considering both men were choreographers their footwork was wanting. Cuevas was in poor health and seemingly no match for Lifar, 20 years his junior. But in fact it was the Chilean who emerged the nominal victor, inflicting the only wound of the proceedings when he grazed Lifar’s arm. The two men embraced in tears, with “honour satisfied, pride vindicated”.

Cuevas died a few years later, while Lifar hung on until 1986. But there is still a living witness to this spectacle which took place over 60 years ago. In the footage below, keep an eye out for a man in an eye patch. He is Cuevas’s principal second, a man then at the start of his long political career, the toad-like far-right demagogue and perennial presidential candidate known to us as Jean-Marie Le Pen.

(It’s worth reading up on the coda, a strange and squalid tale involving the unlikely union of Cuevas’s hapless widow and his last lover, Raymundo de Larraín.)