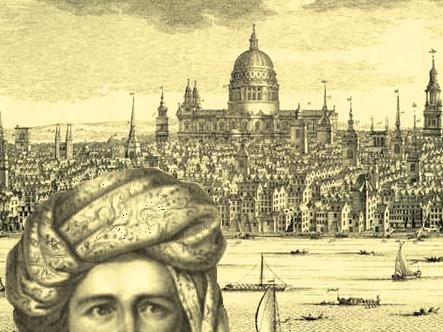 Being engaged, as I am, with trying to evoke the lives of a disparate group of people whose common denominators are relative obscurity and wilful eccentricity is sometimes a little like bottling fog. So visiting London recently I undertook a walk to visit some of these Strange Flowers; hoping to see what they saw, to walk in their footsteps and get some sense of the physical reality of lives which often left little tangible evidence behind.

There are infinite ways to dissect London, endless psychogeographical narratives which can be overlaid on the city’s map. Inevitably it’s the hidden histories that interest me, in a city which has been home to dandies, bohemians and Bright Young Things, which nurtured Aestheticism and Decadence while also proving fertile soil for freelance oddballs who marched under no banner but their own.

Our three-part journey follows the sun from east to west, beginning with birth and ending, naturally enough, with death, with a baron at one end and a marchesa at the other. And just like many of the characters in question, we will be pursuing a crooked path. The buildings that our Strange Flowers occupied are frequently transformed and sometimes erased: some were war casualties, some victims of the post-war greed and ignorance which frequently finished the work the Luftwaffe started. As the photos along the way will indicate, this is an account of absence as much as presence, but let’s think of it as a stroll which gives us a chance to chat about our favourite freaks.

THE CITY TO BLOOMSBURY

To return to London after living in Berlin is like being awoken, irritable, from a long and satisfying sleep. Somehow I managed nine years here, many of my waking hours spent in the City of London where we begin our journey. The “Square Mile” was London for many centuries, a densely packed residential area which today forms the financial district, with little except the narrow winding streets alluding to its medieval heyday. At night you hear nothing but the gentle sound of money accruing interest and even in the mid-morning you have the sense of walking around a schoolyard while the pupils skulk inside, waiting for the lunch bell.

In the beginning was the word...

Or the midday bells of St Mary-le-Bow, the Wren-designed church on Cheapside. London lore

holds that a Cockney is defined as anyone born within earshot of its bells. It’s difficult to imagine someone as precious as writer Frederick Rolfe, a.k.a. Baron Corvo, identifying as a Cockney, but born in 1860 almost next door to the church, he would have been not just within earshot but routinely deafened by the fabled peal. His original childhood home is long gone, replaced by a sober stone building which appears to be of between-the-wars vintage. Rolfe’s status as the ultimate forgotten literary hero is confirmed by the fact that the bookshop which now occupies the lower floors of the building carries no books either by or about him. 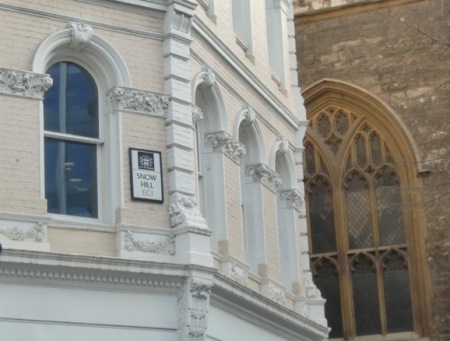 Rolfe’s life was marked by conflict and penury whose origins he sought everywhere but their true source: his own impossible temperament. Compare that with (oc)cult artist Austin Osman Spare (subject of a new biography), who proclaimed “I have had a hard life, but I blame nobody but myself”. He was born in 1886 a few blocks away from Cheapside, on Snow Hill in the district of Smithfield, where the blood of executed criminals once flowed. The blood that flows there these days serves not to satisfy justice but the stomachs of the capital’s carnivores, fed from the famous Smithfield Meat Market. Watch this video for more of Spare’s London, and read up on his life here. 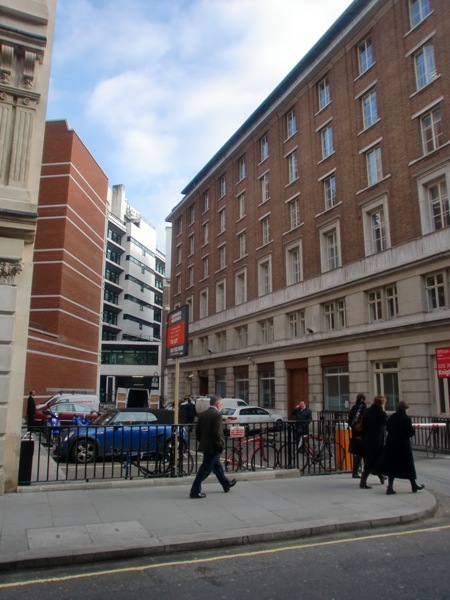 Spare’s exploration of the dark arts inevitably brought him into contact with the modern era’s most notorious occultist, Aleister Crowley; the artist was for a time a member of Crowley’s “magical fraternity” Argenteum Astrum. In the early 20th century Crowley conducted arcane rituals out of his flat at the top end of Chancery Lane, the thoroughfare created by the Knights Templar (surely Dan Brown could do something with that confluence of mystic forces?). The flat had two temples – one black, one white – and Crowley lived there under the name of “Count Svareff”, later settling on “Count Swanoff”. And swan off he did in 1947, while the building was only recently demolished, with nothing yet in its place but a car park.

used to after four years in Berlin). She performed there in the late 1930s after leaving Nazi Germany and before moving to the US. Curiously, Conway is also the name attached to the company which is engaged in ripping up streets all over London and repairing its Victorian infrastructure as it readies for the Olympics (oh, didn’t I tell you about my international earthworks concern? How remiss!)

Still in the City, the intriguing, sprawling complex of buildings known as the Inns of Court was once also home to John Gray, poet, priest and putative inspiration for Wilde’s Dorian Gray. Now as in Gray’s day its quiet squares and sparsely trafficked lanes are home to much of the capital’s legal elite, but it’s hard to imagine that the area once also offered cheap accommodation to young writers; W.B. Yeats and Arthur Symons were Gray’s neighbours.

As the City gives way to the West End, we come to one of the most famous theatres in the English-speaking world, Theatre Royal on Drury Lane (now playing: that taut, Chekhovian ensemble piece Shrek the Musical). Ostentatiously inept thespian Robert

Coates met his end on this corner in 1848, the victim of a hit-and-run. His biographer describes the scene: “no sooner had he seated himself in his carriage to return home, than he recollected having left his opera-glass— the gift of an old friend deceased — in the box. He sprang out of the carriage, and, in making his way across Russell Street (then much crowded), he was knocked down and run over by a hansom cab, alleged to have been carelessly and furiously driven. The driver, so soon as he saw what had happened, increased his speed and made off.” His death robbed London of one of its most colourful figures while greatly improving its theatre.

Theo Marzials was, according to received opinion, as bad a poet as Coates was an actor. But received opinion is rubbish. While no Shelley, his verse retains a period charm little deserving of its terrible reputation, and he was one of the most winningly eccentric blooms in the 1890s hothouse. It’s impossible, in my opinion, to dislike a man who once shattered the hush of London’s most august temple of learning with the cry “Am I not the darling of the British Museum reading room?”

Another flamboyant ghost haunts Tavistock Square, where camp conjuror The Great Lafayette once lived and gave vivid expression to what the New York Times sneeringly described as his “mania for lights, pictures, colours, and flowers”. The walls of the magician’s house were mauve and lilac and the rooms “were crowded almost uncomfortably with things he collected, and there was always an extravagant profusion of flowers everywhere.” The exterior once boasted a likeness of Lafayette’s beloved dog Beauty, who was buried with her master a century ago. 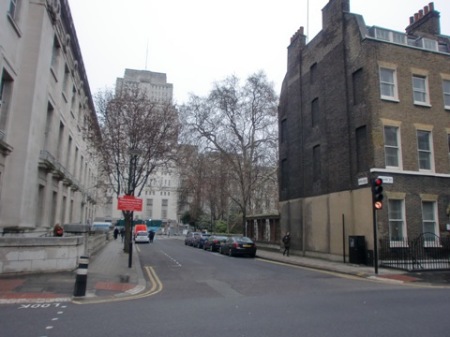 We now find ourselves in the fabled territory of Bloomsbury. It need not detain us long. I know the lives of the bed-hopping, cross-disciplinary Bloomsbury Set should in theory be of interest, but

with the exception of Lady Ottoline Morrell and one or two others they were, as the Queen once so deftly described Prime Minister Ted Heath, “heavy weather”. The turgid accounts of their anguished interrelations and humourless self-importance belong not on the bookshelf but in the bathroom cabinet, best prescribed to the chronically sleepless. So for our (OK, my) purposes, we will merely pause briefly in the shadow of the University of London’s faux-Stalinist Senate House to conjure a bedsit once occupied by M.P. Shiel, the West Indian writer whose beautifully-crafted prose formed an unlikely bridge between 1890s Decadence and 20th century science fiction. In any case, Shiel more rightly belongs to the bohemian oasis which lay just the other side of Tottenham Court Road, which will be our first stop in part 2: Fitzrovia.