Pop quiz! With the Academy Awards at the end of the month, it’s time to test your knowledge of Oscar trivia:

The answer to question 1 is Luise Rainer, which – as it happens – is also the answer to question 2. And 3. The fact that you’re now (most likely) scratching your head is a testament to an utterly unique career – few have flown so high so fast, only to all but disappear from sight.

Luise Rainer was born in Dusseldorf in 1910. She was discovered by legendary director Max Reinhardt and achieved distinction as a stage actress in his travelling troupe. While she had begun to explore film in the early 1930s, Rainer’s Jewish roots made it impossible for her to stay in Germany and she headed to Hollywood in 1935, under contract to MGM. 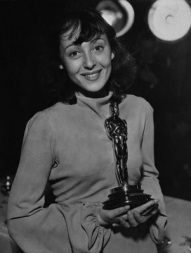 Rainer’s Hollywood career may have lasted barely a handful of years, but the Oscars she won for The Great Ziegfeld and The Good Earth were all the more remarkable considering she generally favoured the stage over film. “To do a film – let me explain to you – it’s like having a baby,” she claimed. “You labour, you labour, you labour, and then you have it. And then it grows up and it grows away from you. But to be proud of giving birth to a baby? Proud? No, every cow can do that.”

Plain-speaking Rainer, clearly no malleable ingénue, found her European theatre sensibilities clashing with the studio system and her film career was all but over by 1939. She formed no lasting bonds with Hollywood; her milieu was always elsewhere. She was married to playwright Clifford Odets, associated with Einstein and Solzhenitsyn, sat for photographers Carl Van Vechten and Angus McBean, and inspired Brecht to write The Caucasian Chalk Circle. Like Marlene Dietrich, Rainer was active during the war, entertaining Allied troops and maintaining vocal opposition to the Nazis.

For decades Rainer was only to be seen on stage, and then only rarely. A dispute prevented her from appearing in La dolce vita, but in 1984 The Love Boat succeeded where Fellini failed in luring Rainer back to the (small) screen and she emerged briefly from retirement to appear in the 1997 film The Gambler. Luise Rainer now lives in London and reached her centenary last year, still spirited, still opinionated.

You might have thought that her homeland would be eager to celebrate an actress who achieved such major international success. The “Boulevard der Stars”, the German-speaking film industry’s version of the Hollywood Walk of Fame on Berlin’s Potsdamer Platz, would – you might further think – be the ideal place. Especially as its organising committee vowed to recognise German-language filmmakers forced to work abroad during the Nazi period. Particularly as there is still an opportunity to honour Rainer while she is still alive.

But as the international film industry descends on Potsdamer Platz for Berlinale this week, Luise Rainer will remain a conspicuous, baffling absence from the honour roll. Berlin-based New Zealander Paul Baylay has been running a campaign to correct this egregious oversight so that Germany’s only Oscar-winning actress might receive the recognition she deserves in her homeland, but so far: no star.

You can contact the Boulevard des Stars here and let them know what you think.

Meanwhile, a clip from The Good Earth: