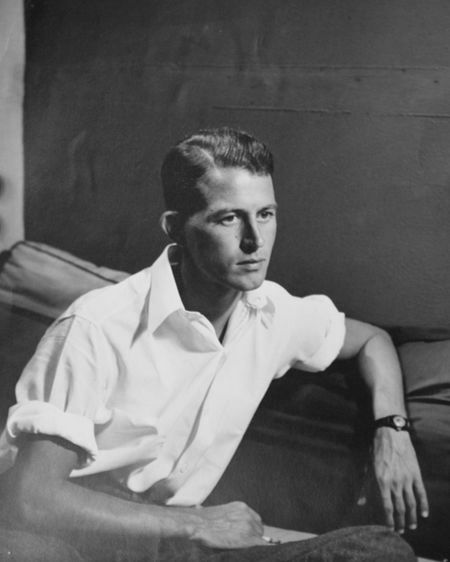 Although I currently have one hand out of service due to a stupid and embarrassing injury (vodka, roller-skates – enough said), I did want to (slowly) tap out some words today about Denham Fouts, one of the 20th century’s most famous grands horizontals.

Putting together Fouts’s life is no easy task even with a full complement of appendages; he arrives as a flat-pack of facts, fables, anecdotes, rumours and bald-faced lies to be assembled as desired. The finished product, though intriguing, won’t bear much weight nor close scrutiny.

The most readily agreed-upon facts are these: Fouts was born in 1914 in Jacksonville, Florida, drifted to New York as a youth and took up his chief métier, that of paid paramour to wealthy members of café society, predominantly male. His impressive client list was said to boast names like Lord Tredegar, Jean Marais and a couple of royal Pauls (Greek king, Yugoslav prince). After travels in Europe Fouts spent much of World War II in the US, including a period of ascetic contemplation with Christopher Isherwood in California. He subsequently moved to Paris and took up opium, languishing in bed under a Tchelitchew painting with his dog Tolstoy at his side. Fouts succumbed to a weak heart in Rome on this day in 1948, at the age of just 34.

Like those fabulous phantasms Mathilde de Morny and Dolly Wilde, Fouts left it to his literary friends to fill in the blanks, so we are forced to rely on the contradictory impressions of those who knew him. He certainly couldn’t complain about the quality of his chroniclers – Isherwood, Gore Vidal and Truman Capote all preserved their encounters with him in fiction, non-fiction or a gentle blend of the two.

Apart from the odd royal “favourite”, the he-whore has few historical precedents, so all three fall back on feminising terms to make Fouts something of a moll in man-drag. For Capote he is “the Beloved”, for Vidal an “homme fatal”, while in his novel Down There on a Visit Isherwood finds “a kind of geisha quality in him”. In a noir-ish scene from the chapter “Paul”, clearly influenced by his Hollywood scriptwriting work, Isherwood shows “Paul” (a.k.a. Fouts) as the Troubled Beauty With a Past placing a desperate phone call to Isherwood’s Cynical Writer, who is naturally at once repelled and fascinated by this cry for help.

Isherwood’s account is perhaps the most fully-fleshed Fouts we have; it is certainly the most generous. Like Hitchcock’s Notorious, “Paul” is at heart a meditation on character transformation: can a whore change his spots, and just as importantly will others allow him to do so? Capote and Vidal, on the other hand, only knew Fouts in his dishevelled, opiated twilight when character development was no longer an option. Vidal was immune to Fouts’s physical charms and suspicious of the compulsive name-dropping which punctuated his long, aimless reminiscences – it was as if the stoned, near-death Fouts was watching his life pass very, very slowly in front of his eyes. Fouts announces his plan to summon Capote to Paris; Vidal states they “were bound to get along” (and if you’ve read the rest of Vidal’s Palimpsest and its pitiless portrayal of Capote you’ll recognise the barb in that observation).

Capote duly appears to take his turn at Fouts’s bed (“at” and not “in” – drugs had affected both his work ethic and the tools of his trade). In the scathing, hilarious Answered Prayers, Fouts functions as a living cautionary tale for the narrator, just starting out in whoredom. Capote at least has more patience with the rambling wraith than Vidal and like Isherwood, he sees the darkness beneath the practised charm, but has none of the English writer’s urge to raise this fallen angel.

Rupert Everett, who had his own stint as a prostitute, made some noise a few years ago about playing Fouts on screen, but subsequently abandoned the idea, and so “the best-kept man in the world” is fated to remain in the anecdotal interzone of 20th century high society and second-hand literary fame.