For no other reason than that I happened to catch a documentary about her on the weekend, a brief look at Maya Deren, specifically her fascination with Haitian voodoo.

Deren, who I’ve mentioned briefly before, was a Russian-born dancer and pioneer of experimental film best known for her 1943 release Meshes of the Afternoon, shot in Los Angeles but light years away from Hollywood in spirit.

While her unshakeable commitment to her own singular vision never brought a mass public or the riches that they proffer, Deren didn’t toil in complete obscurity. In 1947, for example, she was awarded a prize for 16mm experimental film at Cannes, and in the same year was awarded a Guggenheim grant, which she used to fund a trip to Haiti. 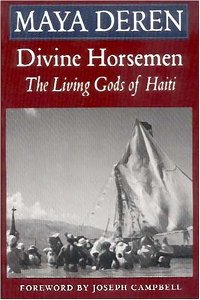 Deren became fascinated by voodoo, which embodied multiple overlapping interests which she had already explored in film, including dance, ritual and altered states of consciousness. Choreographer Katherine Dunham described her as “possessed by rhythm,” and typical of Deren’s approach was that rather than observing dispassionately from the sidelines, she took part in voodoo ceremonies. Calling ritual possession “the materialisation of divine essences, divine ideas”, during one such ceremony she dedicated herself to the goddess of love or, as she put it, “the goddess of all luxuries which are not essential to survival… the muse of the arts”.

In all Deren made four trips to Haiti between 1947 and 1955, returning each time not only with extensive film footage, but also an important collection of music recordings. In 1953 she published the book Divine Horsemen: The Living Gods of Haiti, still recognised as one of the most important works on voodoo.

For 20 years Deren was a patient of the infamous New York doctor Max Jacobson, whose “vitamin shots” (actually speed) pepped up an A list clientele including Marlene Dietrich, Truman Capote and even JFK. Deren also suffered malnutrition; towards the end, any money which came in went first to feeding her cat Ghede (named after a Haitian god); there was rarely anything left over for herself. Weakened by her privations, she died in 1961 at the age of 44.

During her lifetime Deren never managed to edit the Haiti footage to her satisfaction, and after her death her husband, drummer Teiji Oto, took up the task and the film was finally released in 1985 under the same title as Deren’s book. A glimpse-ette: