King of the end of the world 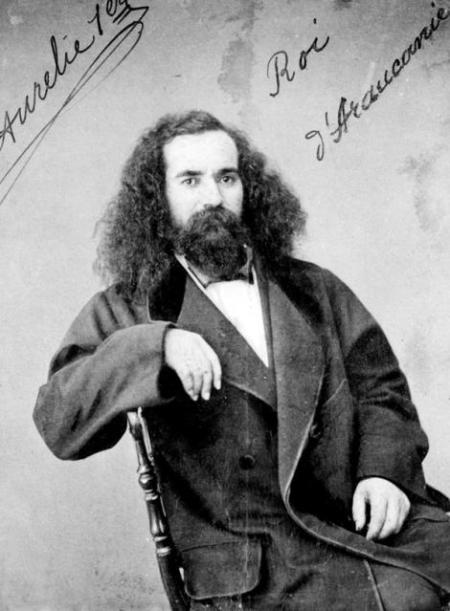 South America in the 19th century was the setting for numerous ideologically inspired colonies. Friedrich Nietzsche’s appalling sister Elisabeth, for instance, distorted her brother’s philosophy to justify the Aryan settlement she founded with her husband. Welsh-speaking colonists pitched up in Argentina, and there was even a group of left-wing Australians who settled in Paraguay, who somehow felt their own sparsely populated southern land-mass was insufficient for their ambitions. All these schemes aimed at a new society, but always with a view to “preserving” or “protecting” a certain group from real or perceived threats, not the egalitarian distribution of resources for the common weal that we might associate with utopianism.

Which makes French adventurer Orélie-Antoine de Tounens just that little bit different. Yes, like recent Strange Flower Alexis Brimeyer he seized/invented a title that wasn’t his. But so did the Pahlavis in Iran and look how well that turned out…OK, bad example. The point is, history is written by the victor and dynastic succession is determined by the formula brutality + time = legitimacy. Queen Elizabeth II rules because back in the dim, distant past when history comprised the vicious rivalry of thuggish, nasty families, her ancestors were a little more thuggish, a little nastier than anyone else.

But back to Tounens. He was born on this day in 1825, a freemason by conviction, dandy by inclination and lawyer by profession. He also had a thirst for excitement and in pursuit of same arrived in Chile in 1858. Tempted by talk of “untamed tribes of the Chilean South” he made contact with the indigenous Machupe people and in 1860, if he is to be believed, accepted their commission to become their king, on the principle that a European ruler would have more influence in the wider world. Whatever the truth of this – Tounens’ testimony is not always reliable, the Machupes’ non-existent – it appears he was genuinely moved by the tribe’s quest for autonomy.

There was just one small problem. Well two actually: Chile and Argentina. The territory that made up Tounens’ kingdom of “Araucania and Patagonia” would have taken sizable chunks out of each country’s southern flanks. The Chileans got wind of the French interloper’s claims and in 1862 put him on trial. They judged him to be mentally deranged, which was a good guess but not an assessment supported by contemporary evidence. In any case it was a quicker solution than bringing up the whole issue of indigenous right to self-determination and so poor Orélie was committed to an asylum, saved at the last minute by a French consul who packed him off home.

Undaunted, Tounens criss-crossed the Atlantic in the ensuing years, attempting to consolidate his kingdom’s sovereignty until 1877, when he was set upon by bandits and returned to France, physically weakened, and died the following year.

As we’ve seen, the flimsiest of regal claims can find credulous posthumous supporters, and to this day, the North American Araucanian Royalist Society continues to detail the line of descent from King Orélie I with impressive earnestness. But he also lives on in literary imagination, including Jean Raspail’s 1981 novel, Moi, Antoine de Tounens, roi de Patagonie, and as a hero to the ’Pataphysicians, connoisseurs of the absurd who trace their origins to Alfred Jarry. And if you find yourself in the Breton village of La Chèze on a wet afternoon, there’s even a museum devoted to Orélie and all things Araucanian, where you can view the kingdom’s winningly down-to-earth steel crown.