Anyone can be a self-made man, but being a self-made king, that takes orbs. So far on Strange Flowers we’ve explored putative rulers of Andorra, Albania and the Ukraine, as well as the ever-so-slightly-made-up kingdoms of Redonda and Sedang, though even these last two were real places, even if they weren’t recognised as sovereign entities by the rest of the world.

But improved communications and military sophistication make it harder to claim a bit of the world for one’s self; even the scheme to take over a glorified tea tray off the coast of Suffolk and rebrand it as “Sealand” resulted in conflict. And so in recent decades, the quest for bogus titles has turned from an outdoor pursuit to a parlour game. Why go to all the effort to subdue some barren backwater when you can just pick up a (hopefully) dormant title?

That was the game plan for Alexis Brimeyer, who was born on this day in what was then the Belgian Congo (now Zaire) in…well, either 1946 or 1948 (it’s a long story). He was the son of a Belgian woman and a father from Luxembourg, neither of whom were remotely noble, but beginning in high school Brimeyer started appending titles to his name. A pattern established itself early on; whenever he was found out, it seems, he would simply move on to another title, usually of higher rank, until he was claiming to be a descendant of a Byzantine emperor (as the book Rebels, Pretenders & Impostors archly notes, the chaotic collapse of Byzantium was a “situation ripe for fiction, fraud and fallacy”). 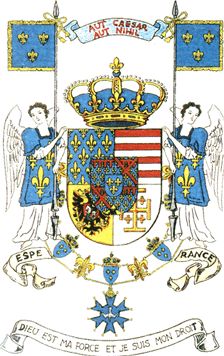 James Algrant has thoroughly investigated and exploded Brimeyer’s multitude of appropriately byzantine claims. Among many intriguing details, I particularly like “Prince” Bruce who married Brimeyer’s mother and subsequently adopted Alexis, thus conferring more bogus titles (though now I’ve got Blossom Dearie’s song “Bruce” in my head, and it ain’t going nowhere). And that Brimeyer started touting himself as “Prince Romanov Dolgorouki” based on a passport from the aforementioned non-country of Sealand, and that he believed – at the height of the Balkan conflict in the early 1990s – that Serbia migiht have benefitted from his kingship. I won’t attempt to paraphrase the whole report here; enjoy the heady combination of transparent delusion and bitter determination for yourself.

But while I believe you can learn as much about a person through their lies as through their truths, Brimeyer remains an elusive character. It would be fascinating to get some insight into why he was so fixated on titles, what was lacking in his persona that only elevation to noble, royal or even imperial status could compensate. Sadly, he’s not around for us to ask; Alexis Brimeyer died in Madrid in 1995.