Love, I love you!  Night, night, cover us!  Thou art
night, O my love; and there are no stars but thine
eyes.

Dark night, sweet night, so warm and yet so fresh,
so scented yet so holy, cover me, cover me!

Let me be no more!  Let me be Thine; let me be
Thou; let me be neither Thou nor I; let there be
love in night and night in love.

N.O.X. the night of Pan; and Laylah, the night
before His threshold!

In New York on July 3, 1915, a drunken Aleister Crowley took a motorboat to the Statue of Liberty with a huddled mass of equally well-lubricated companions, unfurled a tricolour flag and there announced the establishment of the Irish republic. At Lady Liberty’s feet, Crowley — the “Great Beast”, Satanic provocateur, the 20th century’s most notorious practitioner of the dark arts — tore up his British passport in a transport of high Hibernian passion.

Suffice it to say the impulsive gesture received no diplomatic recognition. And if we’re going to be picky it took place on the wrong side of the Atlantic, and Crowley wasn’t actually Irish. But just as he would exert an incalculable influence on occult practice in his time, Crowley was once again at the vanguard: the Easter Rebellion followed less than a year later and in 1919 the Irish Free State was a reality. 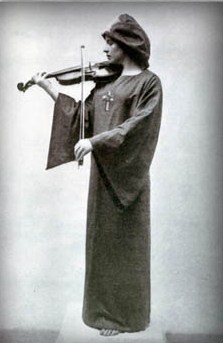 Along for the ride that July morning was a certain “Miss Waddell”, who according to a contemporary news report was “playing patriotic Irish airs on her violin”. It had already been quite a ride for the woman who was now serving as Crowley’s “scarlet woman” or “Whore of Babylon”, one of a series of female accomplices he conspired with in mescaline-fuelled “sex magick” rituals.

She was born Leila Ida Nerissa Bathurst Waddell in Australia on this day in 1880, the fourth of those names honouring her unprepossessing New South Wales hometown. Trained as a violinist, Waddell taught music in Sydney schools before turning to popular entertainment, accompanying early movies with gypsy melodies.

In 1908 Waddell left Australia and toured Europe and the United States with a vaudeville act made up of female violinists, along the way encountering Crowley who was captivated by the part-Maori beauty. They performed esoteric rites in public, one such event in London’s Caxton Hall seeing Crowley invoking the spirit of Mars while Waddell fiddled gamely.

After following Crowley on his eccentric journeys, taking part in his drug-fuelled ceremonies and appearing in his writings under a number of guises, Waddell returned to Australia in 1923 to care for her sick father. She subsequently fell ill herself and died in Sydney in 1932. Her obituary in the city’s main newspaper of the time makes no mention of Crowley.