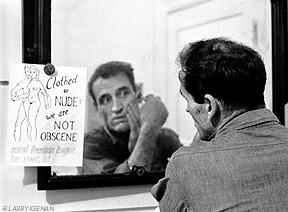 Beat birthday boy Neal Cassady would be 84 today if he weren’t quite so dead. In his relatively short life he belonged to that select group of people whose very existence is so extraordinary, singular and improbable that they only seem to make sense as fictional characters.

Cassady left behind poetry and the autobiographical The First Third, however nothing he wrote attracted the same attention as his most famous double, Dean Moriarty in Jack Kerouac’s On the Road. Cassady also moonlights in Allen Ginsberg’s 1956 poem “Howl”, the subject of a new movie which I’ll be catching later on this week. Ginsberg recalls him as the “secret hero of these poems, cocksman and Adonis of Denver-joy to the memory of his innumerable lays of girls in empty lots & diner backyards”.

Here the two are riffing in San Francisco’s City Lights bookstore in 1965, three years before Cassady’s death, from the documentary The Life and Times of Allen Ginsberg: