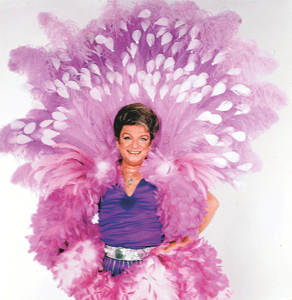 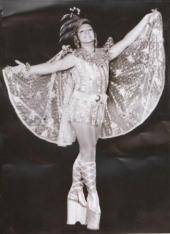 So it was that a few weeks ago I was talking to a friend of a friend in a bar. Said FOF is Turkish and after I’d explained the nature of this blog he suggested I might be interested in one of his country’s most beloved entertainers, Zeki Müren.

Oh, how very right he was.

Let’s start with this video from 1987. There’s not a second of it which doesn’t compel the attention, from the first glimpse which may prompt you to idly wonder how Tony Curtis would look in drag as Bea Arthur, carrying on through almost a minute and a half of instrumental introduction in which Müren gestures hypnotically, until the moment the singing kicks in and you realise why he was so admired. No, I don’t know what he’s singing about but I love the sound of it:

Müren was a huge star in Turkey from the 1950s to his death in 1996 (of which, more in a moment). He wore outrageous costumes of his own devising, though a debt to Liberace’s “more is more” approach to wardrobe and grooming can be discerned. As far back as you go you find Müren pushing the sartorial envelope, as in this 1959 clip which has him liberally interpreting a tuxedo (but again – that voice!):

Müren’s fearless self-presentation broke down barriers in Turkey for present-day stars like the trans-gender Bülent Ersoy, a judge on Popstar Alaturka, the Turkish version of Pop Idol.

After a long career in which he issued over two dozen albums and performed in 18 films, the past caught up with Müren in 1996 in a strange — and fatal — way. While being interviewed after a performance he was presented with the microphone he had used in his first public performance in 1951. Overwhelmed by the gesture he had a heart attack and died on the spot, unleashing a wave of public mourning.

I’ll leave you with some après-ski Zeki: