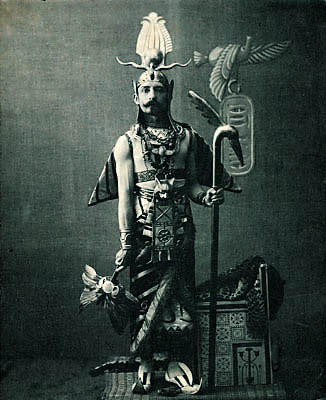 Pierre Loti was one of the most popular French writers of his time. Born on this day in 1850 as Julien Viaud (the pseudonym came later), Loti travelled extensively both as a naval officer and as a civilian, his wanderings and romantic episodes frequently turning up thinly disguised in his novels.

One such work was Les Désenchantées, written in 1906. In the foreword, Loti claims “this is an entirely imagined story. It would be a waste of time trying to give real names to Djénane, to Zeyneb, to Mélek or to André, because they never existed.” This is — how to put this? — bollocks.

Its origins lay in one of the stranger episodes in Loti’s eventful life, which took place while he was in command of a French ship based in Constantinople. In 1904 the author received what was essentially a fan letter from a Turkish woman, in which she daringly suggested — in defiance of all social convention — a meeting, to which she wished to bring two other equally unaccompanied female friends.

The meeting took place, the women heavily veiled, the author cautious yet intrigued. There were subsequent encounters, ever bolder, in which the women unburdened their hearts, bemoaning the fate of woman in Ottoman Turkey, entombed in the harem, their passions denied. Similarly disarmed, Loti took them to the grave of his great love Hakidjé, who as Aziyadé had been the subject of his first novel.

Relations deepened. One of the trio, Leyla, took a keen, romantic interest in Loti but her suspicious family sent her away to their country house, where, distraught, she took her own life. Loti was devastated.

Returning to France in 1905, Loti was surprised when the remaining two of the trio, having escaped their harem, turned up at his sumptuous Orientalist fantasia of a house in Rochefort, begging to be taken in. They proved to be less than ideal house guests, “sluttish, lazy and mischief-making” according to Lesley Blanch in her biography of Loti. But the author was sufficiently inspired by their presence to write Les Désenchantées, in which he recalled the Constantinople encounters, styling himself André and Leyla as Djénane. The book was a huge success.

Only after Loti’s death in 1923 did the truth emerge, and from an unlikely source. “Leyla” was not in fact dead, nor even Turkish; she was a French journalist named Marie Léra who published under the pseudonym Marc Hélys. Her book Le secret des “Désenchantées” told the whole sad, sorry tale, of how she and the two other women, daughters of a senior Ottoman official, toyed with Loti for their own amusement, correctly believing that the author, so susceptible to romance and adventure, would find the situation irresistible.

Loti never found out the truth.