This airborne vision of loveliness, floating serenely above the stage in a Paris nightclub defying, no, mocking gravity, twirling gracefully, swooping majestically…this, ladies and gentlemen, is Barbette.

Despite the name Barbette was neither French nor female, having been born Vander Clyde in Round Rock, Texas on this day in 1899. Hooked by his first encounter with the circus as a child, Clyde joined the Alfaretta Sisters, “World Famous Aerial Queens”, soon after leaving high school. Standing in for an out-of-sorts Alfaretta was his first experience of drag, but it soon became the core of his career. “I’d always read a lot of Shakespeare, “ he reasoned, “and thinking that those marvellous heroines of his were played by men and boys made me feel that I could turn my specialty into something unique.” Equally at home on the highwire or the trapeze, another of his early acts saw him spinning by his teeth dressed in a butterfly costume; by this time the trim, prim Clyde had flown free from the cocoon to become Barbette, and was winging his way to Paris.

“The French paid me the supreme compliment of thinking I was somehow too good to be true,” said Barbette. They were seduced rather than scandalised by his difference, much as they were with Josephine Baker, and even during the Depression promoters were willing to pay up to $2000 per performance for his act. Costumes such as one incorporating 50 pounds of white ostrich feathers, another which was essentially a sheer sheath with strategic beading (much like Marlene Dietrich wore in her last performances) helped the audience suspend disbelief as Barbette was suspended above their heads. 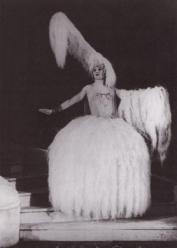 Barbette caught the attention of contemporary writers including Janet Flanner, who in a 1930 piece for The New Yorker described him as a “new Phaethon”, and above all Jean Cocteau (and is it my imagination, or does he seem to pop up in every second post?), who called him “one of the most beautiful things in the theatre”. “He saw even more in the act than I had realised was there myself,” said Barbette. Cocteau lavished praise on him in an essay entitled Le numéro Barbette, cast him in his first movie, Le sang d’un poète, and had a brief affair with him. 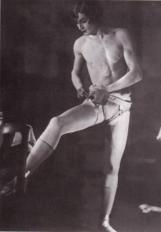 The “new Phaethon” fell from the sky in 1938, retiring from the stage after a diagnosis of polio, though he continued to work behind the scenes on movies and theatre productions. Cocteau’s biographer Francis Steegmuller interviewed Barbette in 1969 and found him snippy, prissy and highly entertaining, but there was also a note of bitterness no doubt aggravated by years of living with physical pain. Barbette took his own life four years later.