Under this mask another mask.

As much as I’d prefer to let these extraordinary images speak for themselves, Claude Cahun‘s equally extraordinary story demands to be told, at least in outline.

Cahun was born Lucie Schwob into a literary family in Nantes in 1894; her pseudonym, which at once obscured her gender and emphasised her Jewish roots, first appears around 1919. By that time she had already met Marcel Moore (then Suzanne Malherbe) at school; they began an intense, lifelong relationship which defied all convention, particularly when Cahun’s father married Moore’s widowed mother, making them step-sisters.

After living together in Nantes, Cahun and Moore moved to Paris in 1922. Cahun had cut off all her hair and for the rest of her life would keep it in a close crop, dyed red or silver, or completely shaved. During the Paris years Cahun concentrated largely on writing, Moore on illustrations, and the two were drawn to the Surrealist movement, particularly its leftist politics.

Cahun was one of the few lesbian artists active in France in the first half of the 20th century not in Natalie Barney’s orbit (see yesterday’s post on Romaine Brooks). It wasn’t just that she didn’t share the rare perfume of precious Edwardian privilege that emanated from Barney’s circle; there was a generational gap as well. Some 18 years younger, Cahun came of age in the phenomenal cultural and social laboratory of the years prior to World War I.

Over time Cahun was drawn more to photography, attracted by the way it allowed her to explore themes of identity, self-image and gender by using herself as a model. Some images from this time are bold, confrontational self-portraits, others elaborately staged and costumed studies. But Cahun didn’t just play-act for the camera; the photographs also reflected her lived reality. There are parallels to Elsa von Freytag-Loringhoven, the Dada Baroness, who was also her own work of art, but really Cahun was out there on her own, long before the rise of Post-Modernism made her preoccupations the stuff of university courses.

In 1937 Cahun and Moore once more shocked their avant-garde contemporaries; they left Paris and chose to live on the island of Jersey at a time when being modern meant to be exclusively city-dwelling. This was their home for the rest of their lives, and also the scene of their bravest endeavours, both artistic and personal. 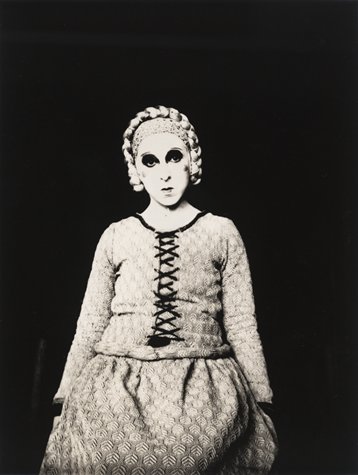 Working in isolation, the two women created images in which the question of authorship was confused, probably deliberately, a similar game to that played by Gertrude Stein in The Autobiography of Alice B. Toklas, though it seems Cahun and Moore’s union was more a of a meeting of equals than the genius/factotum relationship of Stein and Toklas. Their photographs of this time left behind the formal experiments of the 1920s but the artists’ inquiry into the nature of identity was stranger and more compelling than ever, the resulting images unlike anything produced at the time.

Their activities were dramatically disrupted when the Nazis invaded Jersey in July 1940.  At enormous risk to themselves, Cahun and Moore secretly distributed fliers denouncing the occupiers, only being discovered in July 1944. They sentence for both was death, though this was commuted and they were still in prison at the Liberation in May 1945.

Here’s an excerpt from Barbara Hammer’s 2006 documentary, Lover Other: The Story of Claude Cahun and Marcel Moore: