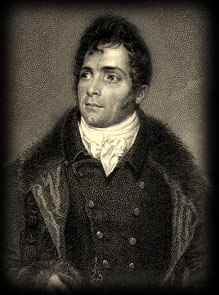 We tend to think of the ironic appreciation of bad art as a fairly recent concept. The Literary Review’s annual Bad Sex in Fiction Award, Tommy Wiseau’s movie The Room and the earlier rounds of any series from the Idol franchise all testify to the noughties’ self-congratulatory embrace of the so-bad-it’s-good phenomenon.

So when did it all begin? When did our culture become so blasé, so over-stimulated, so decadent that, like Roman emperors yawning as they watched dwarves fight sabre-toothed tigers, we needed to witness someone doing something very, very badly to jolt us out of our jaded torpor?

Come with me, back, past Pia Zadora, back, back, past Florence Foster Jenkins, keep going, there’s Theo Marzials, we’re almost there, watch out for The Great McGonagall, a bit further and there, my friends, is the actor Robert Coates.

“Romeo” Coates, as he was often known, was one of the most talked-about figures of Regency England. The talk centred largely on his lack of acting skills which, if witnesses are to be believed, was total. Undaunted, he simply used more of the fortune he earned from his Antiguan estates to buy his way onto England’s most prestigious stages.

He traumatised fellow actors but audiences grew to love his fearless approach to the classics. If a death scene met the spectators’ approval he wasn’t above going through it again. He made liberal amendments to Romeo and Juliet, believing he had “improved upon” the tragedy which made, and inspired, his name. Ironic applause is still applause, and Coates milked it shamelessly.

But Coates made an impression offstage as well, high-rolling through London in a pimped-up carriage which bore his arms, featuring a cock and the motto “While I live I’ll crow”. His notoriety and wealth made him a sought-after guest in the best drawing rooms of the louche Regency period.

Above all it was his extraordinary wardrobe, particularly his weakness for bling, that turned heads; not for Coates the exquisite restraint of his Dandy contemporaries. One report has him wearing “a spangled cloak of sky-blue silk, crimson pantaloons and a white hat trimmed with feathers,” all liberally sprayed with diamonds.

Another memorable look: “from his shoulders hung a mantle of pink  silk, edged with bullion fringe; around his neck was a kind of gorget, richly set with jewels, and at his side was a handsome gold-hilted sword. Coates’ head-dress was composed of a Spanish hat surmounted by tall white plumes…” (I have no idea what a gorget is but I want one). Coates’s “ordinary dress for walking” teamed tasselled Hessian boots and braided coat over a high collar and “richly-coloured Bandana handkerchief”.

Robert Coates died in 1848, knocked over by a coach far inferior to his own. Sadly we can’t witness him riffing on Shakespeare for ourselves, so as compensation here’s Tommy Wiseau reading one of the Bard’s sonnets.