Footnotes to cultural history don’t get much more footnote-y than Bibi-la-Purée. He is mentioned in the French edition of James Joyce’s Ulysses, was painted by Pablo Picasso, haunts the margins of Paul Verlaine’s life and has walk-on parts in numerous accounts of bohemian Paris.

Born André-Joseph Salis around the middle of the 19th century (exact date unknown), Bibi’s pseudonym reflected his humble existence (être dans la purée meaning to be in miserable straits). He survived in Paris by any means necessary: shining shoes, selling flowers or running dubious errands. In essence he was, as many Dandies also were, a flâneur. In fact he was the purest of the type as he belonged completely to the city and his wanderings were solely for experience, and not with a view to recording his observations for the ages.

Bibi operated between Montmartre and the Latin Quarter, greeting anyone he encountered with extravagant musketeer gestures, a stranger to soap but a friend to all. Students from the Sorbonne often shouted him an absinthe and occasionally donated their unwanted clothes. For them he was a figure of fun, and they taunted the 5-foot tramp wearing their outsized cast-offs; he exacted private revenge by stealing from them (he had a particular weakness for umbrellas).

Henry Murger’s 1851 novel Scènes de la vie de bohème (which spawned the opera La bohème) established the template for romanticised urban poverty, and Bibi was foremost among those making a virtue of dire necessity. Numerous contemporary descriptions refer to his proud hauteur, a tramp’s parody of his social “betters”. Sometimes this parody was explicit, as when he visited cafés imitating the pompous, monocle-wearing writer Jean Moréas. A field description of the Latin Quarter reported of Bibi that “his costumes are very varied and his wardrobe seemingly inexhaustible” (although it contradicts another account which said he “changed addresses more often than shirts”).  One astonished witness saw him in a top hat and elegant overcoat, but without shirt or collar. Poet Jehan Rictus called him a “fetid and malodorous Brummell”, the artist Steinlen described him as “a dandy even in his rags, with a button-hole in his soiled and shapeless jacket”, for Verlaine biographer Pierre Petitfils he was “the last king of the Latin Quarter”. 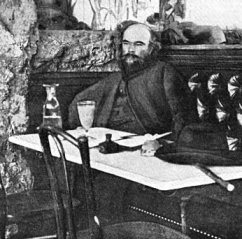 Bibi had met Verlaine in 1886 and became the poet’s factotum. Part of his job description was getting Verlaine home safely after his habitual drinking jags, but witnesses seeing the two unsteadily leaving a bar arm in arm could never be sure who was helping whom. The poet Yeats met Bibi while on a visit to Verlaine, and recalled a “slovenly, ragged man…his trousers belted with a piece of rope and an opera hat upon his head”.

After the death of Verlaine in 1896 Bibi lost what little social relevance he had. As the 20th century dawned Bibi remained stubbornly, incongruously alive, but he had already ceased to be a person and had settled into archetype. In 1901 Picasso included Bibi among his Blue Period roll-call of drunks, prostitutes and other marginal figures.

Bibi-la-Purée, “the incorrigible Bohemian, the strange type who strolls about among the brasseries of Montmartre”, died in 1903. The creative talents of the era are elevated out of the purely anecdotal by their gifts but shabby, haughty Bibi, eternal curio, is fated to stay behind, stalking the city’s boulevards and drinking absinthe in seedy bars in an eternal vie de bohème.